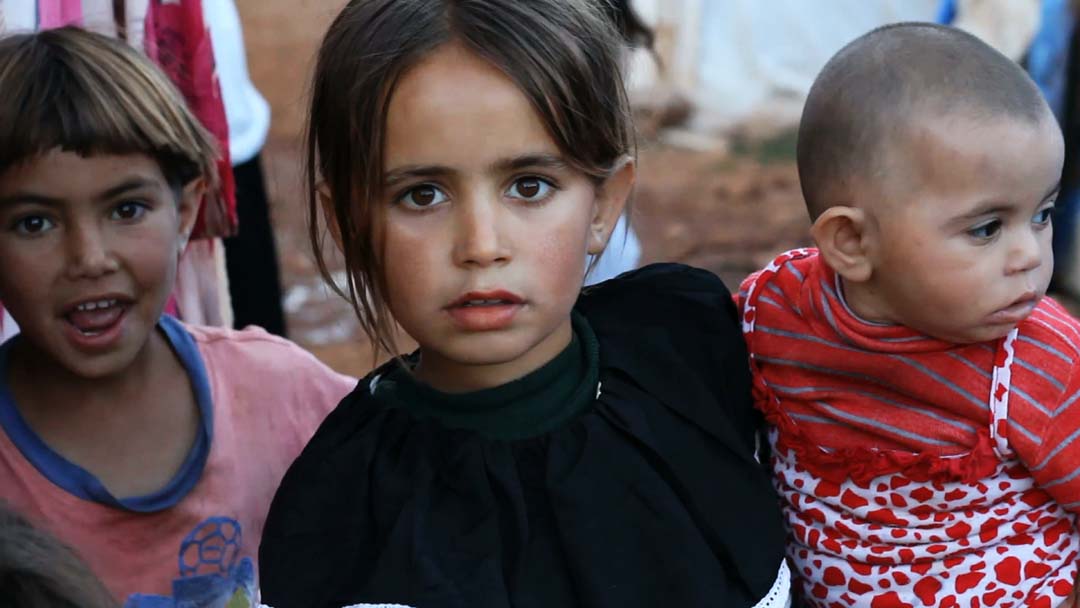 Through the array of colours (July 1, 2015): "She held onto her little sister for as long as I saw her. She was determined to be photographed. With her little frame of barely 10 years, she would carry her sister and weave through the colourful laundry hanging from the lines."

For many Syrians, the hand gesture many know as the peace sign instead serves to symbolize victory. It’s an unexpected sentiment for some child refugees, who share blankets at nighttime with two other people, who work picking olives or peas instead of going to school, and who have fathers in jail or mothers killed by bombs in a four-year-old civil war. “Children would nonchalantly whistle and whiz around to demonstrate running from bullets,” says photographer Priscilla Hwang. “One boy showed me how his friend died, cocking his head to the side. Then he went back to playing.”’

This child she mentions is one of more than a million Syrian refugees living in Lebanon, which has the most refugees per capita of any country. Although the two nations long had an open border, visa requirements were introduced in January to stem the flow of people. The children permitted across the border grow up in tents, eat pita and cheap chocolate bars, and play with tricycle wheels or colourful clotheslines in otherwise dust-brown camps.

Hwang, a 23-year-old journalism student at Carleton University, taught refugee children near Beirut this summer. The school, located between several camps, holds just 70 students. “The kids want to bring you home,” she says. “I slept in their tents a few nights a week.” With mats rolled out and plastic windows rolled back, Hwang and her hosts could lie down and gaze outwards, mosquitoes and dirt in their nostrils and Syrian mountains in view. “Every single time,” Hwang says, “they’d tell me Syria is the most beautiful country of the Arab world.”