You have to see these libraries. (But shh—people are reading.)

Books may be under siege, but these odd, charming libraries are taking them to the Earth’s farthest corners 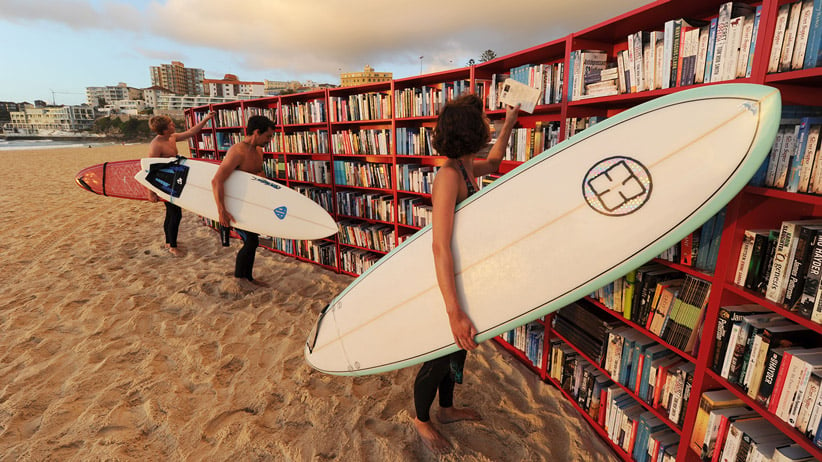 Libraries on beaches or sidewalks, libraries on the move—whether by elephant in Laos or boat in Minnesota or a tank-like vehicle in Buenos Aires known as the “Weapon of Mass Instruction”—their books offered to all on a take-one, leave-one honour system: It may yet turn out, as Nietzsche might have put it, that what doesn’t kill libraries will end up making them stronger. Or merely flat-out cool.

The growth and proliferation of libraries has always been tightly tied to the (economic) devaluation of books. In the Middle Ages, when it took months of monastic labour and the lives—and skins—of an entire flock of sheep to make one unique book, libraries chained their treasures in place and occasionally wrote toe-curling curses within them aimed at any would-be thief: “Whoever steals this book, let him die the death; let be him be frizzled in a pan; may the falling sickness rage within him; may he be broken on the wheel and be hanged.”

Librarians’ collective blood-pressure readings only began to decline with the printing press, the first of the technological leaps that would allow, among many other revolutions in human affairs, the creation of mass lending libraries. The de-individualization of book copies—there are up to 80 million Da Vinci Codes still floating about the planet—and the exponential decrease in their unit cost eventually combined to make books perhaps the cheapest, hardiest and most ubiquitous bundles of information, entertainment and aesthetic joy ever created. Now, the same technological and economic forces that made lending libraries possible seem poised to make them—and physical books themselves—disappear. The coming of the ebook, most digital prophets of the future agree, means that soon, there will be nothing tangible left for book thieves to pilfer.

But a funny thing happened on the way to the landfill, as British journalist and booklover Alex Johnson shows in his stunning little collection, Improbable Libraries. As books continue to lose economic value in the Internet age, and big-city libraries have reconfigured themselves to intensify their digital focus, traditionalist book-lovers have responded to dwindling costs and loss of access with a profusion of innovative libraries. For Johnson, a thoroughgoing traditionalist, there’s no question which is preferable. “I went up to York to see the new wing there,” says the transplanted Yorkshireman who now lives outside London, “and I swear it has only half the books it used to. And many more computers. And a café. But that’s inevitable. Libraries are feeling the pressure, the need to defend their existence, and many are becoming general stores.”

What warms Johnson’s heart more are the smaller-scale developments, including a handful of spectacular personal libraries. In Washington, Canadian writer Wade Davis, explorer in residence at the National Geographic Society, accesses his most precious volumes by climbing a ladder to the book-lined dome that crowns his home office; in Texas, furniture designer Sally Trout reaches the upper shelves of the multi-storey library on her ranch via a winch-lifted bosun’s chair. 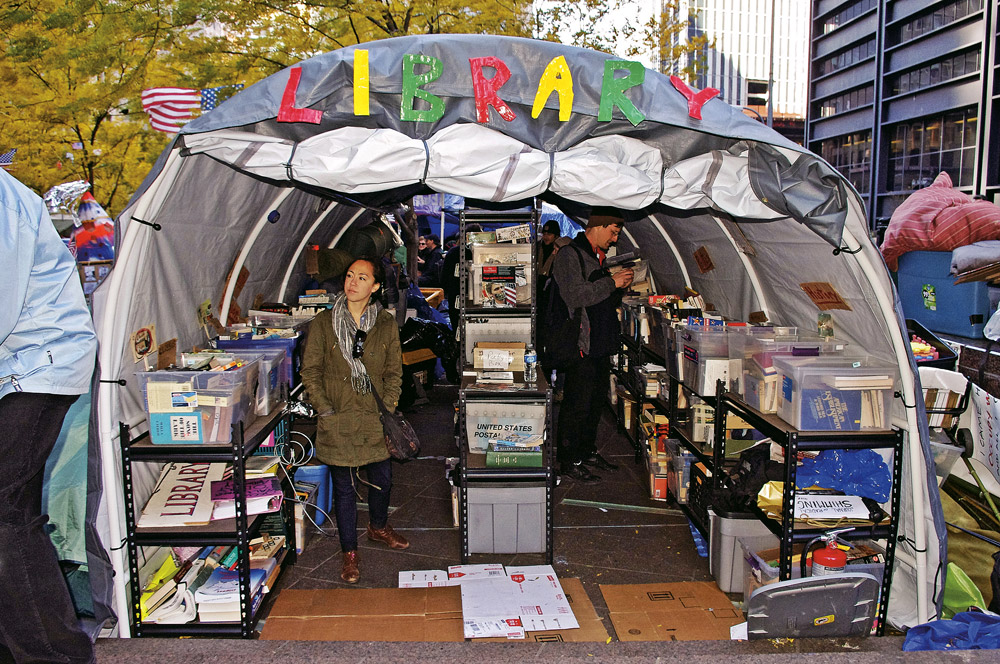 Occupy Wall Street: This street library in New York, set up in 2011, has been destroyed. (Credit: David Shankbone)

But for Johnson, even they pale beside contemporary efforts to bring books where they’ve never been, the numerous mobile and mini-libraries springing up around the world. There are libraries in airports, hotels and subway stations, and a library for deaf children in Burundi filled throughout with giant, locally made hammocks. In Mongolia, kid-lit author Jambyn Dashdondog started the Children’s Mobile Library to bring books to the most remote corners of the Gobi Desert—by camel. In Laos, Big Brother Mouse Library Services runs what Johnson calls the “most romantic” of the improbable libraries: Big Brother’s key employee is an elephant named Boom-Boom, the sole means possible of getting books to children in remote mountaintop villages still unreachable by road.

Nowhere do the socioeconomic-technological trend lines intersect more neatly than in the phone-box library. The red booths, originally developed in 1935 as part of the celebrations for King George V’s Silver Jubilee, are as iconic a symbol of Britain as a double-decker bus. As late as 2002, there were 92,000 across the country, half of which have since been removed after the spread of mobile phones. Rather than rip out tens of thousands more, British Telecom launched an adopt-a-kiosk program in 2009, offering local communities a chance to buy them for about $2 each. The public response was enthusiastic: Grocery stores, wildlife information centres and defibrillator storage units are some of the new uses. And dozens have become very local libraries—two casualties of the digital age finding a new life together.