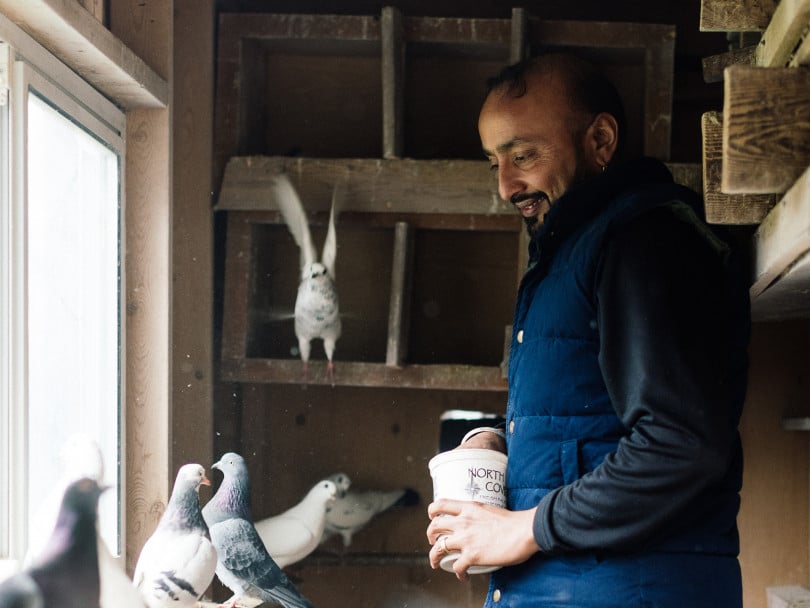 Dulay with his pigeons (Photograph by Alana Paterson)

UPDATED Jan. 16, 2020: Information from Lisa Muri’s court submission has been added to this story

The politicians are seated in a semi-circle at a meeting of the council. One by one, they raise their voices as part of the deliberation. “I believe it is time we took a position on this,” says a black-blazered woman. “It’s not an industry that I want to support,” a second woman, wearing dark-rimmed glasses, reads into the ofﬁcial record.

“It’s time,” concludes the mayor, donning the heavy chain that is the insignia of his ofﬁce, “to end the practice in our community.”

It is a fall meeting of the District of North Vancouver’s city council and they are discussing whether people should be allowed to keep pigeons. Councillors Lisa Muri, in the blazer, and Megan Curren, with the glasses, ultimately vote with the mayor in favour of an outright pigeon ban.

Coun. Matthew Bond, one of those who votes against, says skeptically, “I don’t necessarily see this as a good use of our time.” But the bylaw passes, four to two.

READ: How a stressed woman found solace through looking at birds

Something smells, though. Only one property in the community is known to harbour pet pigeons. Only one complaint about pigeons, dating back several years, is known to be active. Only one city councillor has recused herself from the discussion. “I have been in a situation like this,” Coun. Betty Forbes says, at the same meeting. “So I’m stepping aside.”

Documents obtained by the CBC under access-to-information seem to bolster that view of events. The “situation” was that Forbes lived next-door to pigeons. That she did not like pigeons. And that after complaining to the city as a private citizen to no avail, she took matters into her own hands; after being elected to council in 2018, in an email to two fellow councillors, she requested a bylaw banning residents from keeping the birds.

Emails viewed by Maclean’s suggest that during the spring, Muri initiated a process to change the district’s pigeon ownership rules, and kept Forbes up to date on its progress. But the whole project has since run into trouble because it turns out Kulwant Dulay, Forbes’ neighbour, cares deeply about his pigeons. He cares enough to go to court.

His petition to B.C. Supreme Court, dated Dec. 4, seeks to have the bylaw declared illegal and set aside. It relies heavily on the CBC’s reporting, referencing emails between Forbes and Muri earlier this year that appear to reveal a plot to hatch the bylaw.

Dulay is arguing that Forbes’s involvement was “biased and bad faith and acting in a conflict of interest,” says Camille Chisholm, a lawyer representing the pigeon enthusiast. The district has retained its own lawyers and was expected to respond in January.

READ: The birds, the bees and the bonobos

The same week as Dulay’s petition was ﬁled, the District of North Vancouver announced it was tasking former B.C. privacy commissioner David Loukidelis with investigating how the pigeon ban came to be. His review, the district announced, will assess the “awareness” of conflict-of-interest rules by councillors. The process is expected to take a couple of months.

Dulay, Chisholm adds, has kept homing pigeons as pets for years—including during his time in India before he immigrated to Canada. “My neighbours in the front and back, everybody loves my pigeons,” says Dulay, adding that other than Forbes’s, he hasn’t had a complaint in 17 years. “Everybody comes to my house and looks at them. It looks cool, them flying around.” Some have names. One is called “Big Boss.” His favourite pigeon is blue and white. He said it always comes to his hand.

Dulay keeps his 15 birds in a coop that’s about as tall as the backyard fence and roomy enough for him to enter and move around. During the warmer months, he lets them out to fly around the neighbourhood, including over other people’s yards. He said they always return.

Lately, he has wondered whether Forbes has a problem with him, not his pigeons. He said she “never talks” to him, and notes that he has never complained about her two barking dogs, though he believes he might have reason to.

His across-the-street neighbour, meanwhile, has spoken in his support. “I’ve had opportunity to go over and see the coop,” Krista Page told council on Nov. 18. ”It is clean. There’s no foul smell. I’ve never met neighbours that keep a tidier driveway and home and everything.” Page noted there have been no complaints from the Dulays’ other next-door neighbour, adding: “I just feel that this is very much a misuse of power.”

Forbes declined an interview request from Maclean’s but insisted in an email that there is “another set of correct facts” to the story. “However, because the mayor has requested an inquiry of all council and himself,” the email added, “I am unable to make any comments at this time.”

Her only public response came at the end of the same meeting Krista Page attended. “If I have erred in any way,” she said, “I assure council and the community that it was done inadvertently and in good faith with my understanding, as a new councillor, of the conflict-of-interest rules.”

Muri echoed Forbes in an email to Maclean’s, saying: “We are currently reviewing the process of this bylaw, so it would be inappropriate for me to comment.” But a response to the petition later filed in court by her lawyers denies the councillor was aware of any interest Forbes could’ve had in a pigeon ban beyond one “in common with electors of the municipality generally.”

The submission argues that neither councillor stood to gain financially from the bylaw and doubles down on the councillors’ position that the ban is legitimate and serves to protect residents from current and future pigeon keepers who might “adversely impact them or their property.”

To some, this is more than a dispute between neighbours. Givo Hassko, who is on the board of the Vancouver Poultry & Fancy Pigeon Association, told council in November he believed this was a test case for corruption in Canadian politics writ large. “If there are no consequences to how council goes to change bylaws here locally or Canada-wide,” he said, “then anyone—anyone—would get a green light.”

Hassko set up a GoFundMe to help with Dulay’s legal fees. At the time of writing, it had raised $700. A single commenter named Wayne, who pitched in $55, offered this input: “It is important that pigeons are not homeless.”

This article appears in print in the February 2020 issue of Maclean’s magazine with the headline, “North Shore coo d’état.” Subscribe to the monthly print magazine here.