'A friendship of minds': Claire L'Heureux-Dubé on the legacy of Ruth Bader Ginsburg

The former Supreme Court justice speaks about her long friendship with Ginsburg, their proudest moments and the role of women on the bench 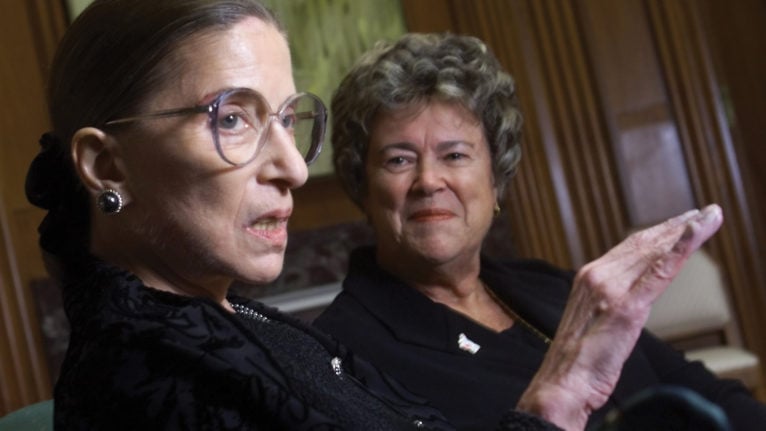 When former Supreme Court justice Claire L’Heureux-Dubé heard of U.S. Supreme Court Justice Ruth Bader Ginsburg’s death on Sept. 18, she broke down and cried. “I’m not the only one,” she says. “It’s sad because of the timing, but it’s sad in itself because of her contributions.”

It was sad, too, because the two women were close friends—each having risen to their countries’ highest legal callings during a time of overt sexism in the field, each a defender of equality, each a mother and grandmother, each a lover of opera.

Maclean’s spoke to L’Heureux-Dubé, 93, about their friendship and the legacy that Ginsburg leaves behind.

Q: When Ginsburg was appointed to the U.S. Supreme Court in 1993, you read an article about her in the New York Times. And you decided to write her a letter.

I added at the end of the letter: “Please do not answer. I understand you will be overloaded. There’ll be so many letters.” She answered. She said, “I invite you to meet me in New York or Washington.” So at one point I went and we spent a nice time together. She took me to the opera. It started that way and continued on. When we had email, we continued to exchange emails.

Q: What was the first thing you liked about her?

A: I liked everything. She was a real person, she was not making it up. She was natural, she was human, she was always asking: “How is your daughter? How are your grandchildren?”

There’s a tradition—judges of the Supreme Court of both the U.S. and Canada are invited to be honorary members of the American college of trial lawyers. In Florida, I think in 2000, I was honoured at the same time she was. I made a speech, she made a speech, such a different speech. She was more funny, and I was more serious on the differences between our two courts. I remember I danced with her husband.

We had these interchanges—at a Yale conference, conferences on women’s rights and so on. We were both speaking on equality, but in different ways. It’s interesting because we never discussed it. We didn’t discuss conversations in law. It was more personal. It’s a friendship of minds.

Q: You both came up as young female lawyers during a time when sexism was rampant in law. Do you think that discrimination is alive today, even if it is more subtle?

A: Probably, but I think there’s been great progress. Look at the universities. At least in Quebec, half of students if not more are women. There are women professors of law. My sister was a professor of law. I think that it has improved a lot, people are more conscious of it. There’s always more to do, there’s no doubt about that.

Q: What do you view as the appropriate balance between calling out inequality versus coalition-building and reaching out out across the aisle?

A: In my career on the bench I worked on so many decisions for women, especially victims of sexual assault. I tried to make it more favourable for women to be heard, not to be victimized.

The thing I had with Ginsburg—we were both dissenters. I dissented in Canada v. Mossap (a case that dismissed a gay man’s right to recognize his partner as immediate family) and 10 years later the court upheld gay marriage. That’s what I told Ginsburg, that I thought her dissents would become the law. In my case, my dissents mostly became the law in 10 years, 20 years. She said she was hoping for that, but she didn’t believe that would happen.

Q: Why did you and she believe so strongly in the importance of well-articulated dissent?

A: She said in her biography, and very often, that her mother influenced her very much. It’s the same thing for me. My mother always said, “It’s not just, it’s not just.” I think we would not compromise on the issues of equality, on discrimination, because we had suffered it ourselves and we knew how discouraging it is for women who were discriminated against, who have been the victim of sexual assault.

I was lucky to survive as the first woman lawyer in Quebec City at the time when the law firms didn’t hire women, but I was lucky to have a mentor that eventually accepted me. So it was the same for Ginsburg. Our paths are very similar in many ways. She was a much more perfect intellect than I am, so there’s a distinction. I wish I were as strong as she was.

Q: What was a contribution that made you especially proud of her?

A: The best one was Virginia Military [a landmark case that struck down male-only admissions policy at the Virginia Military Institute]. She wrote the majority decision of the court. She succeeded in opening the doors—wide open.

Her reasoning was always strict and not polluted by this and that. She was straight. And what I admired, also, the tradition in the United States Supreme Court, they can deliver the dissent or judgment in person on the bench. She did that in certain dissents with passion. Not even seeing her I thought sometimes she was trembling. I admire a person who can stand up with her principles and never change—she was always very faithful to herself and her beliefs.

Q: Tell me about your own proudest moment on the bench.

A: It was Ewanchuk. [R. v. Ewanchuk, a case that directly convicted a man of sexual assault against an unconsenting 17-year-old girl after a lower court had acquitted him, and for which L’Heureux-Dubé wrote a dissent emphasizing the original judge’s faults.] It was difficult because my colleagues didn’t collaborate at all and I was left alone in the tragedy that followed—that was very difficult. I got all the bad press. I’m proud that I did it. Until today, I’m proud of that: To say that myths and stereotypes are no part of the law, and this is not acceptable for a judge. Unfortunately at the time everybody sided with the judge I criticized.

Q: Your dissent was prescient.

A: You write what you think is right. That’s it. Whatever the consequences. Ginsburg did that all the time, and I did that all the time. I didn’t care about myself, my reputation, should I, shouldn’t I. No, no, no. This was the law and I will always be faithful to what I think is the right thing to do. Courage on the bench is important and she has courage like no one.

Q: Especially towards the end of her career Justice Ginsburg came under an enormous amount of political pressure.

A: Yes—to resign. She hoped to remain until the election. Unfortunately, in that sense it’s tragic. It’s a tragedy in itself. Her death is a tragedy for the world, anyway, but the fact that she died before the election, to me is so sad. She tried to remain. Her intellect was perfect until the end.

Q: What are the dangers of the politicization of the courts?

A: It’s a tragedy. We’re not there to run the country. We’re there to tell the law. Candidates’ nominations are so bad—the politicians have a field day. In Canada it is so different. I am so proud of our Supreme Court. Whatever their divisions, still it’s not politics, it’s a difference of opinion, and on that everyone can agree.

The United States will destroy itself. Their battles of nomination are terrible. It destroys the credibility of the court. Luckily Ginsburg was appointed without that kind of debate at the time. She was given not a free ride, but the respect that she deserved. She didn’t have to go through the horrors of the Kavanaugh hearing.

Q: What did you think of the Kavanaugh confirmation hearings?

A: I think it was terrible. In many ways because the way he answered the questions, the way that everybody who appeared—I’m sorry for the lady who went there and was treated badly. His answers show so many of his failings. I don’t think anybody was impressed by the way it was done. This diminished the court.

Q: After Justice Ginsburg’s death there are concerns not just about the credibility of the court but about its more progressive decisions getting overturned. Looking at the situation in the U.S., what are you most concerned about?

A: The questions are so big and terrible. The main concern is about democracy. If you cannot rely on elections, if you cannot rely on the truth, if you have all this fake news, this is very worrying. My daughter and my grandchildren live in Boston in Massachusetts and I’m worried for them. They are Canadian—I hope they will come back to Canada.

It’s sad if people are afraid to be themselves, afraid for the consequences for their jobs, so they remain silent. A position for many of those conservatives on the Senate, who laugh at what Trump is doing but are not strong enough or good enough to say it or act against it.

Some people say the good always wins. I’m not so sure, but it cannot get lower than this.

Q: What’s the best advice Justice Ginsburg ever gave you?

A: Do the job. If you’re nominated to a court, you have to be prepared to do the right thing whatever the circumstances. The best advice is to do the job and be faithful to the law. I believe very much that the law is a living tree. Society changes, and people, and the law should follow the society. For example, on the right to die with dignity, 25, 20 years ago, I was dissenting with Justice MacLachlin. And now it’s become the law.

My question is always: Why is it that women are the ones that are dissenting, that are winning eventually? I would like to know why we probably judge society better. Maybe because we are mothers, and men are on another level.

Q: That’s a good case for putting more women on the bench.

A: I’m not a women’s rights person to the extent that some people would have wanted me to be, but I can say that women have improved the law. Certainly whether you win or not. Ginsburg is winning by herself, and I’m sure in the future her dissents will be law. Dissenters are the voice of the future and it’s women who are doing it.