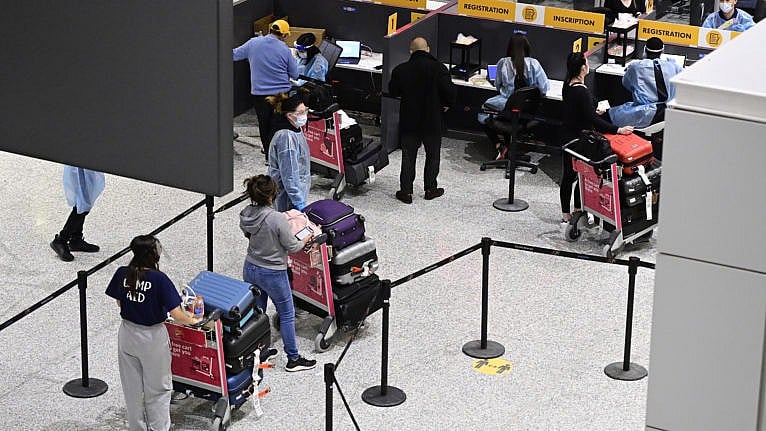 On April 22, Transport Minister Omar Alghabra announced a 30-day ban on direct commercial and private flights from India and Pakistan to Canada because of a higher number of COVID-19 cases detected among travellers from those two countries. In addition, passengers from India and Pakistan who depart via an indirect route for Canada will need to obtain a negative PCR test from the point of their last departure before arriving in Canada, he explained. The measure, announced after 5 p.m., takes effect at 11:30 p.m.

This week, Canadians found out that B.1.617, a new variant of SARS-CoV-2 detected in India, had arrived in Canada. On April 19, data analyst Jens von Bergmann tweeted a blurry screen grab of a government list that showed B.C. had identified 39 cases of the variant, as of April 4. Then, the next day, Quebec reported a case in the Maurice region of Quebec that had been identified through genomic sequencing. And on Thursday, Alberta reported a case.

Currently, B.1.617 is labelled a “variant of interest” (VOI) and is also known as a “variant under investigation” (VUI). It isn’t in the same category as the more familiar variants of concern (VOCs) like B.1.1.7 or P.1. “A variant of concern has been shown to be more transmissible or cause more significant illness,” explains Dr. Isaac Bogoch, an infectious diseases specialist at the Toronto General Hospital Research Institute and the University of Toronto. “A variant of interest has not yet been shown to cause [more transmission or illness] but may possibly [do this], and is still being evaluated,” (B.1.617 wasn’t even classified as a VOI at the time B.C.’s list was compiled, reports Srushti Gangdev of the Burnaby Beacon.) Now, researchers are racing to determine its properties and characteristics.

RELATED: The P.1 variant is spreading in Canada. What do we know about it?

The move to ban flights from India and Pakistan comes as India reports more than 300,000 cases a day. The country has a positivity rate of at least 15 per cent and a health care system collapsing under the crush of patients. Scientists believe the surge in cases is being driven by the B.1.617 variant, which is now the dominant strain in India.

In Canada, the federal government tracks all domestic and international flights in which someone later tested positive for COVID-19. Between March 1, when the third wave began, and April 15, COVID-19 has been traced back to some 465 international flights. Delhi was the departure city for 165 of those flights, more than double any other international departure city; no. 2 was Paris with 68 cases, according to flight exposure data from Health Canada. On Thursday, as Canada introduced its new restrictions, Health Minister Patty Hajdu said that while 20 per cent of all passengers entering Canada were on flights from India, they accounted for half of all positive COVID-19 tests upon arrival.

When it comes to border restrictions, Bogoch, who studies human mobility and the global spread of infectious diseases, says there are three main options to prevent infection being brought into a country or to slow down the rate of such infections: 1) general flight restrictions that affect everyone; 2) border restrictions, such as advance PCR tests and quarantines; 3) and policies targeted at specific countries. Often, Bogoch says, countries pick a combination of those measures. (Maclean’s talked to Dr. Bogoch a few hours before Canada introduced restrictions on flights from India and Pakistan.)

RELATED: Here’s what you really need to get a COVID vaccine in Ontario

“Number one is, stop all flights,” he says. “Is that practical? Probably not.” The closest any major developed country has come to doing this is Australia, where all arrivals must quarantine for 14 days in government-controlled hotels. Such a system takes a lot of resources to implement and operate, meaning those countries “have to restrict the number of people coming in because you can’t accommodate all of them at the same time,” Bogoch explains. For Australia, the result is a waiting list for anyone, including citizens, wanting to come into the country. Currently there are still tens of thousands of Australians stuck outside of their country, and this week, some of those people filed a complaint with the United Nations Human Rights Committee in Geneva because they have been prevented from entering their own country.

The second border restriction category is to “have policies to ensure that if [travellers] have COVID-19, they don’t contribute to the spread of COVID-19 in the country through various measures to protect others within the country.” Canada currently requires negative PCR tests before non-essential travellers arrive in Canada, though some of those travellers will end up being pre-symptomatic when the tests are taken. As well, international air passengers have to go to quarantine hotels for three days while waiting for results from another PCR test, though CTV News reported that more than 200 passengers have refused and opted to pay the $3,000 fine instead, which is roughly the same as the cost of the quarantine.

“Currently our system significantly reduces the amount of COVID-19 brought into the country, but it’s fair to say that it doesn’t eliminate it altogether,” says Bogoch. He also points out that, while we have data on the number of flights with COVID-19 exposure, we don’t know how many travellers tested positive in their country of origin and didn’t get on a flight, or how many tested positive on arrival, quarantined as required and didn’t spread whatever variant they had.

The third option involves “policies taken to curb travel from individual countries,” Bogoch explains. In adopting this kind of policy, “from an optics standpoint and from a political standpoint, maybe it looks like there is action being [taken],” he says. “But in reality there are a lot of workarounds.” He recounts what happened when Canada temporarily halted flights from Britain because of the B.1.1.7 variant: “I remember watching  an interview on TV with an individual who was in the United Kingdom who was complaining that she would have to fly to France first and then onward to Canada.”

As Canada’s flight restrictions against travel from India come into effect, there are just 40-odd cases of B.1.617 publicly reported in Canada. Yet, Bogoch cautions that these are just the numbers detected; the variants are usually identified via time-consuming genomic sequencing. And countries without robust genomic sequencing likely have the variants in greater numbers than they know. “All this BS on social media—‘B.C. has the biggest outbreak of the Brazilian variant outside of Brazil,’” says Bogoch. “Are you kidding me? The U.S. is probably swimming in that, they just aren’t detecting it.” (Canada tests five per cent; the United States was testing just 0.3 per cent, as of December 2020)

In fact, the country of origin with the most number of flights arriving in Canada that later reported a COVID-19 exposure is the United States, which had 274 flights between March 1 and April 15 (India is second, with 165 flights, all from Delhi). For all the talk of stricter flight rules, Bogoch notes that “we have essential workers who are crossing the Canada-U.S. border by the tens of thousands a day. I think we forget that the Canada-U.S. border is keeping us alive. It’s not just your Amazon hockey gloves coming from the States, it’s food, you know.”

Truckers and other designated essential workers are crossing the border without the negative PCR tests and quarantine required of non-essential travellers. A few months ago, Bogoch suggested to a parliamentary committee that Canada prioritize the vaccination of truck drivers.  On April 20, North Dakota and neighbouring Manitoba announced that the state, which has a surplus of doses, would offer free vaccinations to all truckers crossing the border, with the hope of fully immunizing up to 4,000 Canadian truckers in the next two months. “I love it! I love it! I love it!” said Bogoch. “I’m not trying to pat myself on the back, but I’m going to pat myself on the back.”

“I would remind people that the current system that we have in Canada, while clearly not 100 per cent perfect, is still probably preventing a significant number of infections from coming into the country. It’s a big buffer, but it’s just not a perfect buffer, and I think we have to keep that in mind. It’s probably helping a lot,” Bogoch says. “Could you improve upon it? Of course we can. If we improve upon it, does it come at a bigger cost? Of course it does.”