A week of awards for Maclean's journalism 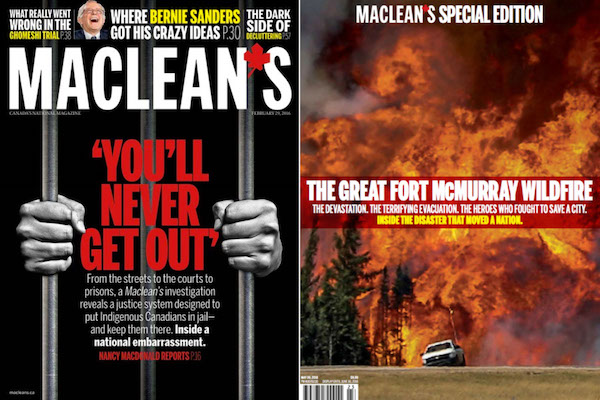 Maclean’s took home two awards at the first annual Magazine Grands Prix on Thursday, followed by a win at the Canadian Association of Journalists awards event on Saturday.

At the Magazine Grands Prix the publication, which was nominated for six awards, won Best Multi-Platform Story Treatment for Michael Friscolanti’s story Saving Family No. 417 about a group of Canadians that sponsored a Syrian refugee family. Nancy MacDonald also won in the Best Science, Business and Politics category for her story, Justice is Not Blind, an investigation into the justice system’s treatment of Indigenous men and women.

“I am so pleased to see Michael Friscolanti and Nancy Macdonald recognized for their deep reportage and incredible writing. They are two of the country’s most impressive reporters, and their work on Syrian refugees and Indigenous incarceration last year was world-beating,” said Alison Uncles, editor-in-chief at Maclean’s.

At the annual CAJ Awards, Jason Markusoff, Nancy Macdonald and Charlie Gillis won in the text feature category for The Great Escape, an 11,000-word feature on the Fort McMurray fire.

“Fort Mac was the biggest story in the country last year, and Maclean’s did it justice,” said Uncles. “The sweeping narrative Charlie, Jason and Nancy produced is the best piece of writing and reportage out there about the tragedy. And they wrote it with such heart, as they always do.”

The CAJ is a non-profit organization with 600 members across the country that promotes Canadian journalism and advocates for freedom of the press. The Grands Prix were conceived last year after a large group of magazine publishers decided the industry needed a refreshed, stripped down awards program that better represented excellence in publishing. They formed the Canadian Magazine Awards organization, which runs the Grands Prix and a fellowship program for up-and-coming journalists to work at a host magazine in Canada.