But RCMP are solving cases 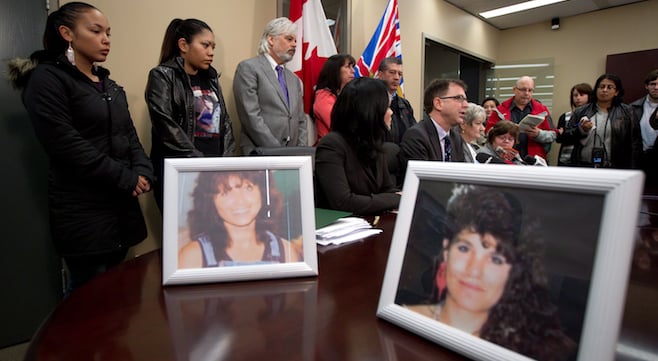 WINNIPEG — A RCMP report says aboriginal women have been much more prone to violent death than non-natives, but police have solved cases involving both groups at virtually the same rate.

The 22-page report into murdered and missing aboriginal women paints a dark picture of poverty, unemployment and other factors that the Mounties say require a response from all Canadians.

“We still have a lot of unanswered questions … but I think this research project, this operational overview, is an excellent first step in that direction from a policing community,” Janice Armstrong, the RCMP’s deputy commissioner for contract and aboriginal policing, said at a Winnipeg news conference Friday.

“It’s my hope … that it will contribute to that larger Canadian conversation.”

Frances Chartrand with the Manitoba Metis Federation said the report requires concrete action, including more services for women, in communities across the country.

“What’s going to the grassroots? We need programs and services at the local level,” she said.

The report, a detailed statistical breakdown of 1,181 cases since 1980, says aboriginal women make up 4.3 per cent of the Canadian population, yet account for 16 per cent of female homicides and 11.3 per cent of missing women.

“It’s by no means on our part to accord any type of blame to the victim … but the reality is that there are difficult social and economic circumstances that need to be considered and need to be discussed as we move forward,” said Supt. Tyler Bates, RCMP director of national aboriginal policing.

The report indicates a small minority of missing and murdered aboriginal women had been involved in the sex trade — 12 per cent versus five per cent among non-native women.

It also challenges accusations from some quarters that aboriginal deaths are not taken as seriously by police. The “solve” rates are almost identical at 88 per cent for aboriginal women and 89 per cent for others.

The Mounties say they are sharing the data with other police forces, which have jurisdiction for roughly half of the unsolved cases, and have directed their own divisions to review any outstanding matters.

They are also promising to add resources to investigative units where needed.

The report appeared to do little to quell calls for a national inquiry and prompted more debate in the House of Commons.

“Conservative policies and programs are not working, so will they finally listen to the families and to Canadians across the country and call for a national public inquiry?” New Democrat MP Nycole Turmel asked in question period Friday.

“Now is the time to take action, not to continue to study the issue,” Bob Dechert, parliamentary secretary for justice, responded. He pointed to recent funding increases to fight domestic violence.

Earlier this month, Metis actor and singer Tom Jackson added his voice to calls for an inquest.