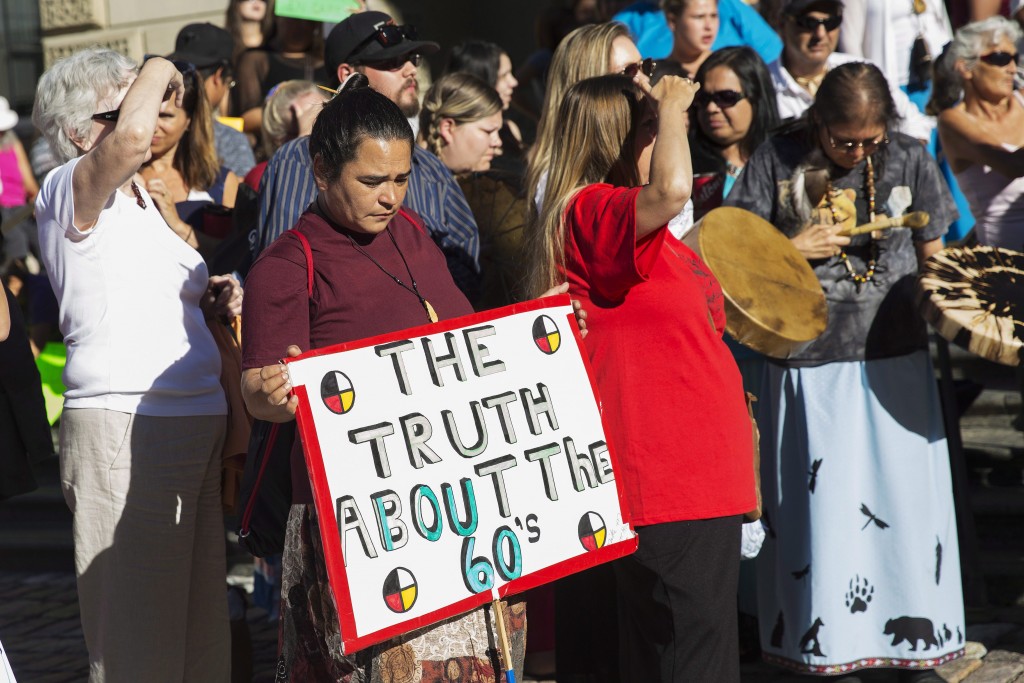 TORONTO – Scores of aboriginals from across Ontario rallied Tuesday ahead of a landmark court hearing on whether the Canadian government robbed them of their cultural identities during a two-decade period in which native children were taken from their homes and placed with non-native families.

Some, who travelled for as long as two days to attend, listened as speakers denounced the ’60s Scoop and what they called the “cultural genocide” perpetrated by the government against indigenous people. Speakers called the practice a deliberate effort to assimilate aboriginal children.

“I just want to say to Canada: We will not allow the harm of our children. We need to bring our children home, the ones that were lost, the one’s that were stolen,” lead plaintiff Marcia Brown Martel told the crowd.

“(It’s) such a harm and injustice as a human being to have our children taken from us.”

Martel, a member of the Temagami First Nation near Kirkland Lake, Ont., was one of an estimated 16,000 aboriginal children who ended up in non-native homes. She later discovered the Canadian government had declared her original identity dead.

The ’60s Scoop depended on a federal-provincial arrangement that operated from December 1965 to December 1984. The $1.3-billion class action argues that Canada failed to protect the children’s cultural heritage, with devastating consequences to victims.

“Treaties do not give you permission to take our children,” Regional Chief Isadore Day said.

Following the rally, the crowd marched behind traditional drummers to the nearby courthouse, where they filled the courtroom, to listen as their lawyer, Jeffery Wilson, called on Superior Court Justice Edward Belobaba to decide the case, which began in early 2009, based on the evidence he already has.

The unproven claim – it seeks $85,000 for each affected person – alleges the children suffered emotional, psychological and spiritual harm due to the devastating loss of a cultural identity that Canada negligently failed to protect.

The ’60s Scoop, which occurred without any consultation with Indian bands, may have been part of the government’s hidden agenda to “remove the savage Indian from the child,” Wilson told court, but what exactly motivated the “abomination” is not clear.

By robbing the children of their First Nations identities, Wilson said, they were denied the kind of crucial cultural and language experience other Canadians take for granted. The harm is “profoundly ongoing,” he said, even if the events in question are now historical.

Canada, which has tried on several occasions to have the case thrown out, argues among other things that it was acting in the best interests of the children and within the social norms of the day.

As had been previously agreed, Belobaba adjourned the hearing until Dec. 1, when the federal government will make its case – if it does not decide in the interim to try to negotiate a deal to settle out of court.

Last week, Indigenous Affairs Minister Carolyn Bennett said she would like to see that happen, a theme picked up on at the morning rally. Speakers, including New Democrat Charlie Angus, urged the Liberal government of Justin Trudeau to be on the “right side of history” and make good on his promise of a new era in Canadian-aboriginal relations.

Before court ended, Wilson cited a few words in Algonquin which he spelled out.

“Ati kati ci wepik,” he said. “We must never let this happen again.”

In an interview, Glen Hare, deputy grand council chief of the Anishinabek Nation, said he planned on doing his part to ensure it doesn’t happen again. His one regret, he said, is once having signed adoption papers for one of his band’s babies, who he believes was taken abroad.

“I will never sign another adoption, I don’t care who it is. You can lock me up first or shoot me,” Hare said. “Our kids are not for sale, that’s the bottom line.”