According to U.S., deadly Mosul airstrikes were at the request of Iraq

Reactions from the residents, World Health Organization, Iraqi politicians and the U.S.-led coalition. 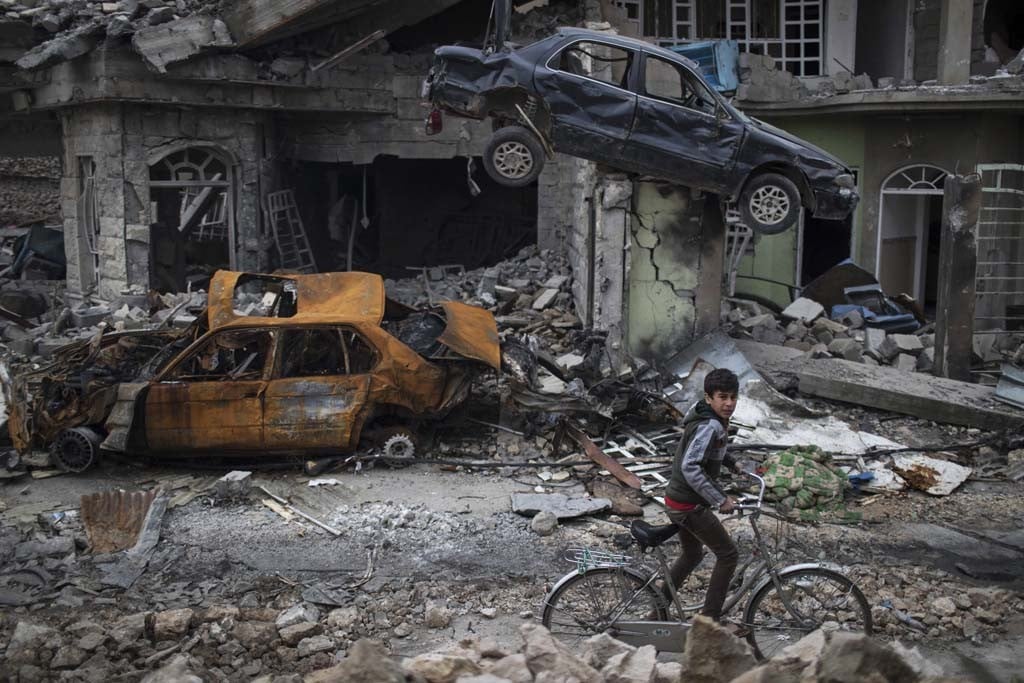 BAGHDAD — An initial review of airstrikes over the past days indicates that the U.S.-led coalition has struck fighters and equipment of the Islamic State group west of the northern city of Mosul at the request of Iraqi security forces, where there were allegations of civilian casualties, the Pentagon said Saturday.

The coalition said in a statement that the airstrike was conducted on March 17. Reports have indicated that the airstrikes have allegedly killed more than 100 civilians in western Mosul where U.S.-backed government troops are fighting IS.

“The Coalition respects human life, which is why we are assisting our Iraqi partner forces in their effort to liberate their lands from ISIS brutality,” the statement using another term to refer to IS. “Our goal has always been for zero civilian casualties, but the Coalition will not abandon our commitment to our Iraqi partners because of ISIS’s inhuman tactics terrorizing civilians, using human shields, and fighting from protected sites such as schools, hospitals, religious sites and civilian neighbourhoods.”

Altaf Musani, representative of the World Health Organization in Iraq, told the Associated Press in the Jordanian capital of Amman that “it is our understanding that there was an incident and we have worked with the local health actors and they have confirmed more than 100 are dead.”

He added that the organization’s priority was quick treatment for those wounded.

“When you take a better look at what those numbers mean, what is worrying for the WHO and aid actors is that roughly 30 per cent of the total numbers are women,” he said. “Roughly 30 per cent of that large number are children under 15, and that is deeply concerning because of the capacities needed to treat those wounded coming out of the front lines.”

In tweets published on his official account, parliament speaker Salim al-Jabouri said “we realize the huge responsibility the liberating forces shoulder” and call on them to “spare no effort to save the civilians.”

In a statement issued on his website, Vice-President Osama al-Nujaifi, himself from Mosul, described the incident as a “humanitarian catastrophe,” blaming the U.S.-led coalition airstrikes and excessive use of force by militarized Federal Police forces. Al-Nujaifi put the number of civilians killed at “hundreds.”

He called for an emergency parliament session and an immediate investigation into the incident.

Residents of the neighbourhood known as Mosul Jidideh told The Associated Press on Friday that scores of residents were believed to have been killed by two airstrikes that hit a cluster of homes in the area. Resident Ahmed Ahmed said there were over a hundred people within the cluster taking refuge from the missiles.

AP reporters saw on Friday at least 50 bodies being recovered from the wreckage of the buildings.

Faced with their toughest fight yet against IS, Iraqi and coalition forces have increasingly turned to airstrikes and artillery to clear and hold territory in western Mosul’s densely-populated western neighbourhoods. Civilians, humanitarian and monitoring officials are warning of increased civilian casualties in western Mosul due to the increased reliance on airstrikes and artillery.

Backed by U.S.-led international coalition, Iraqi forces launched an operation in February to drive IS from the western half of Iraq’s second-largest city, after declaring eastern Mosul “fully liberated” the previous month. The city is divided by the Tigris River into a western and eastern half and the initial operation to liberate Mosul of the extremists began last October.