After the world lost interest in Alan Kurdi, the carnage continued

At least 8,500 have drowned since a photograph of a dead boy on the beach moved the world. Many more have disappeared into Syria's gulag. We will all be judged. 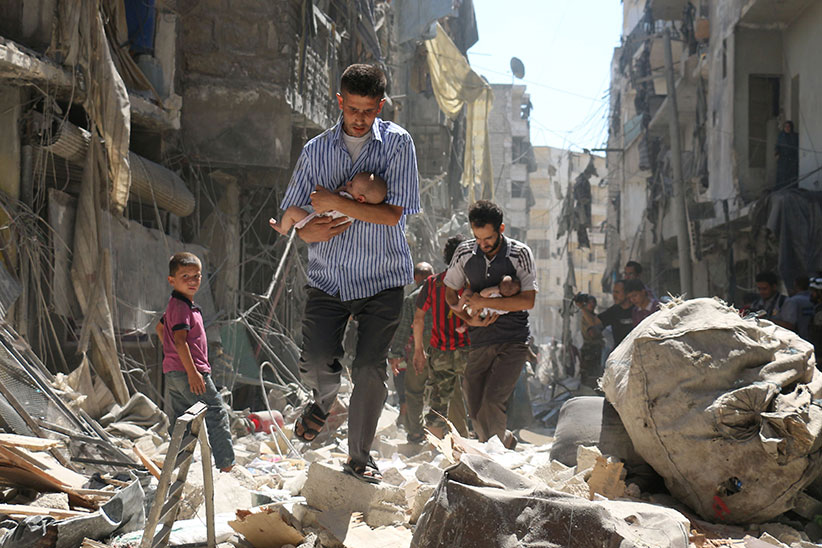 Syrian men carrying babies make their way through the rubble of destroyed buildings following a reported air strike on the rebel-held Salihin neighbourhood of the northern city of Aleppo, on September 11, 2016. (Ameer Alhalbi/AFP/Getty Images)

There will be a reckoning for all of this one day, and we will all be judged, every last one of us. But on this day, two years on, it is enough to recount what happened in the early morning hours of September 2, 2015.

The Turkish photojournalist Nilüfer Demir came upon the body of child on a beach near the Turkish seaside town of Bodrum. The little boy was one of 12 Syrian refugees who had drowned when two overloaded inflatable boats capsized a few hours earlier after setting out in what should have been a 30-minute night crossing to the Greek Island of Kos.

Demir immediately filed the picture with the Dogan News Agency, and posted the photograph on Twitter. Straight away, the photograph came to the attention of Peter Bouckaert of Human Rights Watch, who was in Hungary at the time, documenting the merciless humiliations facing Syrian refugees on their arduous overland tramp into Europe. Bouckaert re-tweeted the picture.

The merciless horror of all this is difficult to bear, so it is perhaps best to tell the story by relying mostly on numbers.

By the time little Alan Kurdi drowned, along with his mother Rehanna, his five-year-old brother Ghalib and those nine other Syrian refugees, the Syrian Observatory for Human Rights had counted 11,964 children among the innocents who had been slaughtered in Bashar al-Assad’s Syrian abattoir since March, 2011.

In the eight months leading up to September 2, 2015, the International Organization for Migration counted more than 2,600 people, most of them Syrians, who drowned in the Mediterranean in the attempt to reach Europe. But it took that photograph of little Alan lying dead on the beach, in his red shirt and blue shorts, to capture the world’s attention. At least for a while.

Paramilitary police officers investigate the scene before carrying the lifeless body of Aylan Kurdi, 3, after a number of migrants died and a smaller number were reported missing after boats carrying them to the Greek island of Kos capsized, near the Turkish resort of Bodrum early Wednesday, Sept. 2, 2015. AP

An analysis undertaken by the Visual Social Media Lab at the University of Sheffield shows that within 12 hours of Demir’s encounter with that lifeless little boy, more than 20 million people around the world had seen her photograph. The image spread via social media, on news websites, and on the front pages of dozens of newspapers. Before the day was over, the photograph was circulating on Twitter at a rate of 53,000 retweets per hour.

The Sheffield study shows that until Alan Kurdi’s photograph shocked the conscience of the world, the number of tweets containing the word “refugees” averaged well below 20,000 a month. But during the month of September 2015, the word appeared on Twitter millions of times; in the immediate aftermath of Kurdi’s death the word was showing up in more than 600,000 tweets a day.

Within two weeks, Demir’s photograph had utterly transformed the way Europeans spoke about the hundreds of thousands of migrants who had begun arriving two years earlier in rickety boats on the shores of Italy, Greece and Spain. German Chancellor Angela Merkel led the way. Before 2015 was over, Germany had accepted nearly 900,000 asylum claims.

FROM THE ARCHIVE: Inside the tragedy that woke up the world

Demir’s photograph caused a particularly loud roar in Canada, because it immediately turned out that the Kurdi family had hoped to make a new life in Canada. The Kurdis were the subject of a detailed and carefully-prepared appeal submitted directly to Citizenship and Immigration Minister Chris Alexander, who had refused to intervene on their behalf only weeks earlier. In the uproar, Stephen Harper’s Conservatives, Tom Mulcair’s New Democrats and Justin Trudeau’s Liberals were suddenly forced to grapple with the public outrage and competed with one another to seize upon the outpourings of sympathy for Syrian refugees.

Justin Trudeau’s Liberals led the pack, and after coming out on top in the October 19 election, Trudeau made good on his pledge to redouble efforts on behalf of Syrian refugees. By the end of 2016, roughly 40,000 Syrian refugees had found homes in Canada. About 14,000 of those Syrians were privately sponsored by Canadian families and service organizations.

But then Ottawa lost interest, leaving a backlog of thousands of private refugee sponsorship applications that remain in the system. Germany has lost interest, too. Last year, the number of Syrian asylum applications Germany accepted for consideration had dropped by two-thirds to 280,000.

In the two years since Alan Kurdi drowned, at least 8,500 more people have drowned or have gone missing in the Mediterranean, or on the roundabout northward trek through the deserts of North Africa. During the first seven months of this year, the International Organization for Migration counted 2,236 drownings, 29 deaths by dehydration, 25 by hypothermia, 73 by unknown causes, and 28 people who starved to death. Most of the dead are Syrians.

The United Nations counts close to five million Syrians who have fled the country to become refugees since the Damascus regime began waging war on the Syrian people in the early months of 2011, in response to a non-violent democratic uprising. The UN also counts another six million “internally displaced” Syrians in the bloody chaos that has ensued – a revolution quietly abandoned by the U.S. administration of Barack Obama and other NATO leaders, and most recently betrayed formally and officially by President Donald Trump.

READ: Syria is gassing children to death. What should Canada do?

It is exceedingly difficult to track the mounting civilian death toll. The Syrian Centre for Policy Research counts 470,000 dead from March 2011 to February 2016. The United Nations and the Arab League counted at least 400,000 by April 2016. The Syrian Observatory for Human Rights reckons as many as 475,000 Syrians have been killed as of last month.

The one point of agreement among the various agencies and non-governmental organizations trying to keep track: the overwhelming majority of the dead were civilians murdered by Syrian tyrant Assad and his accomplices in the Kremlin by way of the Russian Air Force, and by Assad’s masters in Tehran, by way of the Iranian Revolutionary Guard Corps’ Quds Force and Hezbollah.

Paradoxically, it is easier to number the missing. By the count of the Syrian Network for Human Rights, 76,656 people have been “disappeared” by regime forces, including 4,219 women and 1,116 children. They have simply vanished into Assad’s gulag of dungeons and torture chambers, most notoriously the vast Saydnaya prison, less than an hour’s drive from downtown Damascus. At least 13,000 Syrians have been murdered there over the past six years, and aerial photographs released by the U.S. State department confirm the presence at Saydnaya of a crematorium, first identified by Amnesty International, that the Assad regime is employing to burn all the dead.

A few weeks after the photographer Nilüfer Demir happened upon little Alan Kurdi’s body, she was still reeling from the encounter. “There was nothing left to do for him,” she explained. “I thought, this is the only way I can express the scream of his silent body.”

The silent bodies of all those dead Syrians will utter their own screams, one day. The sound will be deafening, and it will ring in humanity’s ears forever.