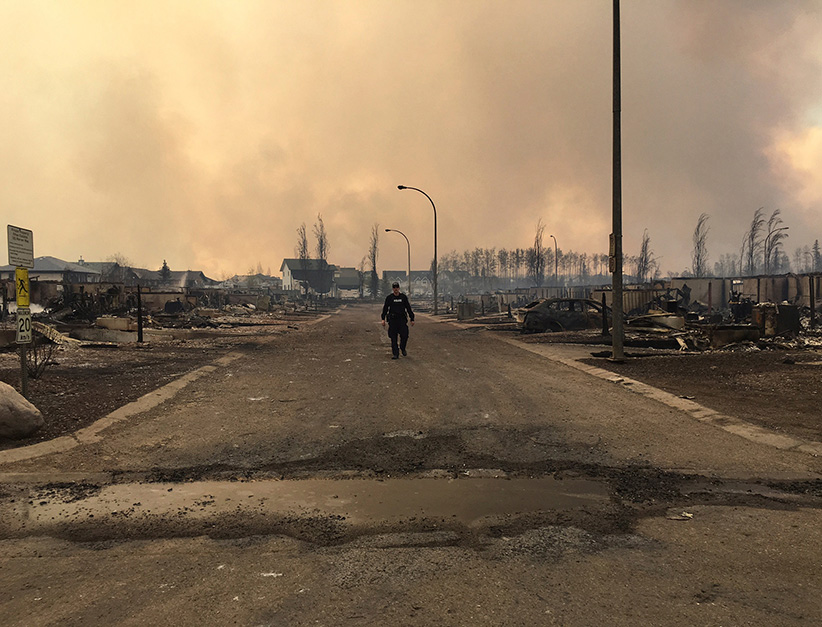 A Mountie surveys the damage on a street in Fort McMurray, Alberta, Canada in this May 4, 2016 image posted on social media. (Alberta RCMP/Reuters)

CALGARY – Alberta wildfires that swept through Fort McMurray in May have resulted in the loss of $1 billion in planned capital spending in the oilsands for 2016, according to Alberta’s chief energy economist.

Matt Foss said Wednesday that he believes those plans are deferred, not cancelled. But he doesn’t know when or if companies will resume their spending given benchmark oil prices that remain below break-even levels.

Foss said the interruptions have dropped expected oilsands spending in the current year to $18.5 billion from $19.5 billion estimated in the province’s spring budget.

“The majority of them were expansions to existing projects,” he told reporters on the sidelines of a heavy oil conference in Calgary.

“It interrupted the logistics chain for them such that their ability to deploy workforce … over those months was no longer available and then the rebuild effort around Fort McMurray has them just hitting pause for the moment. Hopefully, they will resume here later this year or early next year.”

Foss said lower costs have reduced the West Texas Intermediate price at which oilsands expansion projects make money by about $10 per barrel to US$50 to $60 per barrel – but that’s still higher than current prices in the mid-$40s.

Figures provided by the oilsands companies to the province show that about $800 million scheduled to be spent in May and June did not take place due to the upheaval in workforce availability and construction logistics caused by the fire, said Foss. Although little damage was done to the projects themselves, rebuilding in the city has continued to cause disruptions, he added.

Oilsands analyst Michael Dunn of FirstEnergy Capital said the wildfires affected progress on major oilsands projects under construction such as Suncor Energy’s (TSX:SU) Fort Hills oilsands mine, but he expects any capital spending decline to be a deferral, not a cancellation, in those cases.

Alberta oilsands production in May dropped by about one million bpd in May, Foss estimated, and by about 700,000 bpd in June. At full capacity, Canada’s oilsands industry produces about 2.5 million bpd.

One of Alberta’s oldest thermal oilsands projects was forced to shut down during the wildfires and has not reopened. Officials with Japan Canada Oil Sands say their Hangingstone project will remain closed until benchmark oil prices improve to above US$50 per barrel.