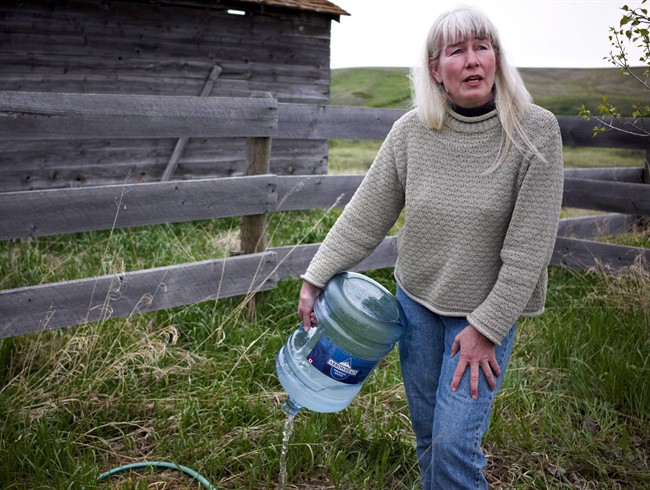 Jessica Ernst pours out some of the methane contaminated water from her well in Rosebud, Alta., on June 2, 2011. THE CANADIAN PRESS/Jeff McIntosh

OTTAWA – The Supreme Court of Canada says an Alberta woman cannot sue the province’s energy regulator as part of her claim that hydraulic fracturing so badly contaminated her well that the water can be set on fire.

In a 5-4 ruling Friday, the high court rejected Jessica Ernst’s argument that a provincial provision shielding the regulator from legal action was unconstitutional.

She alleges that fracking on her land northeast of Calgary released hazardous amounts of methane and other chemicals into her well and that her concerns were not properly investigated.

Ernst sought damages of $50,000 in claiming the regulator breached her constitutional right to free speech.

She said that from November 2005 to March 2007, the regulator’s compliance branch cut off contact with her, saying she would have to raise her concerns only with the regulator and not through the media or other public means.

Ernst claimed that infringed her charter right to free speech — effectively punishing her for the public criticism and preventing her from speaking out further.

The Alberta courts cited the immunity provision in provincial law and exempted the Alberta Energy Regulator from the lawsuit.

Ernst argued at the Supreme Court that the immunity clause in the Energy Resources Conservation Act was unconstitutional because it barred her claim for charter damages.

In the court’s reasons for judgment, Justice Thomas Cromwell said Ernst could have asked a court for judicial review of the regulator’s purported bar on communication with her. If she had established a case, the court could have set aside the regulator’s directive, he wrote.

“While an application for judicial review would not have led to an award of damages, it might well have addressed the breach much sooner and thereby significantly reduced the extent of its impact as well as vindicated Ms. Ernst’s charter right to freedom of expression.”

In addition, Cromwell wrote, it could “chill” the regulator’s ability to carry out its duties in the public interest.

In a dissenting opinion, four judges, including Chief Justice Beverley McLachlin, said it was “not plain and obvious” that Ernst’s claim was barred by the immunity provision. They said it was arguable that the regulator’s allegedly punitive actions fell outside the scope of the provision.

The judges added it was premature to address the constitutionality of the immunity provision, and Ernst’s claim should be returned to the Alberta courts to decide “the important issues of free speech and charter remedies that her case raises.”

Ernst said she is “horrified” by what the ruling will mean to other Canadians whose drinking water could be affected by fracking chemicals.

“If they get contaminated or harmed, or their children get cancer from the fracking chemicals or get sick, and they present evidence to the regulator, and the regulator violates their charter rights in response and engages in abuse of process as they did with me — it is really terrible,” she said.

Cory Wanless, one of Ernst’s lawyers, said the ruling was actually a 4-4-1 split as one judge dismissed the appeal on technical grounds.

Wanless said the ruling does not resolve some of the key issues, including whether a government can pass a law that prevents people from going to court to challenge a regulator if they believe their charter rights have been breached.

“This judgment is going to cause some head-scratching among the legal community,” he said.

Ernst said she plans to focus her time and money on continuing her lawsuit against Encana and Alberta Environment.

She said she expects others will file similar lawsuits over regulators and fracking. “I worked as hard as I could to get as far as I could and now it is somebody else’s turn. I throw the gauntlet down.”

A spokesman for the Alberta Energy Regulator said the agency was reviewing the decision.

The British Columbia Civil Liberties Association, an intervener in the case, said it was disappointed with the court ruling.

“This decision has worrisome implications for people across the country seeking to hold government-appointed decision-makers accountable for egregious unconstitutional actions,” said Laura Track, the association’s lawyer.

With files from John Cotter in Edmonton