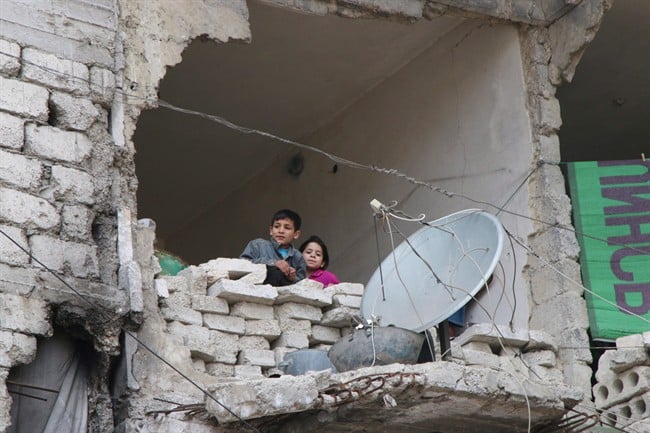 OTTAWA – Garbage and grass are now on the menu for the starving residents of Syria’s besieged rebel-held city of Aleppo, says a senior official with the United Nations World Food Program.

The 275,000 residents of East Aleppo have been at the centre of Syria’s civil war since July, when they last received food or medical supplies from the UN relief agency. Government attacks have also knocked all hospitals out of commission.

“The reports we’re getting (are) that people are looking through garbage to find something to eat – that’s if they find garbage in Aleppo,” Hadi said in an interview with The Canadian Press.

Hadi was in Ottawa on Thursday and Friday to update Canadian government officials on the crisis.

“People have been under siege for a very long time,” he said. “We heard that some people are now resorting to eating grass, whatever they can get their hands on. It’s a pretty ugly situation.”

Russia is backing Assad’s continued bombardment of northern Syria. On Nov. 15, Russia announced it would attack militants in the northern province of Idlib and the central province of Homs. Since then, Syrian warplanes have stepped up the bombing of Aleppo, and have urged residents to leave the battered city.

Hadi said the UN is grateful for Canada’s financial aid. It has earmarked $840 million in humanitarian assistance funding over three years to the crisis in Syria and Iraq.

But he said Canada is a respected country, and asked that it also mount a diplomatic push with other countries to help the World Food Program regain access to besieged Syrians.

“We have the food to meet all the needs of the eastern Aleppo, if we are given the opportunity. Even what the infants need. We have the special food needed for the malnourished children,” he said.

“We have the food baskets ready to go into Aleppo – flour, rice, pasta, beans, oil, sugar – all of this is ready, and available. But what we need is access.”

The supplies are in storage in neighbouring Turkey and stockpiled in Syria itself, including in western Aleppo, said Hadi.

“We don’t need a lot of preparation. If we are allowed access, we can load our trucks and move in hours – not in days, in hours.”

On Friday, two more hospitals in northern Syria were targeted in airstrikes that left at least 12 dead and scores more injured.

A UN-sponsored gynecology and gender-based violence treatment and awareness centre in Termanin village in the northern Idlib province was hit by four consecutive airstrikes Friday, killing two civilians who were in the building and injuring a gynecologist and a janitor in the facility.

In the western countryside outside Aleppo, at least five people – including children – were killed and dozens more wounded in an airstrike on the village of Taqud.

Jan Egeland, a senior UN aid adviser on Syria, said earlier this week that the UN had received “verbal support” from Russia to allow aid into Aleppo and the evacuation of its wounded. That came after he said he received written permission from Syrian rebels to enter their part of Aleppo.

Egeland was still waiting to hear from the Syrian government on Friday.

“In the World Food Program, we don’t do politics,” Hadi said. “We deal with the results of the failed politics.”