What happened when Alison Azer met the PM

The Prime Minister assured Alison Azer that her family's file is on his desk. So what's next for the four children she alleges were abducted by her ex-husband? 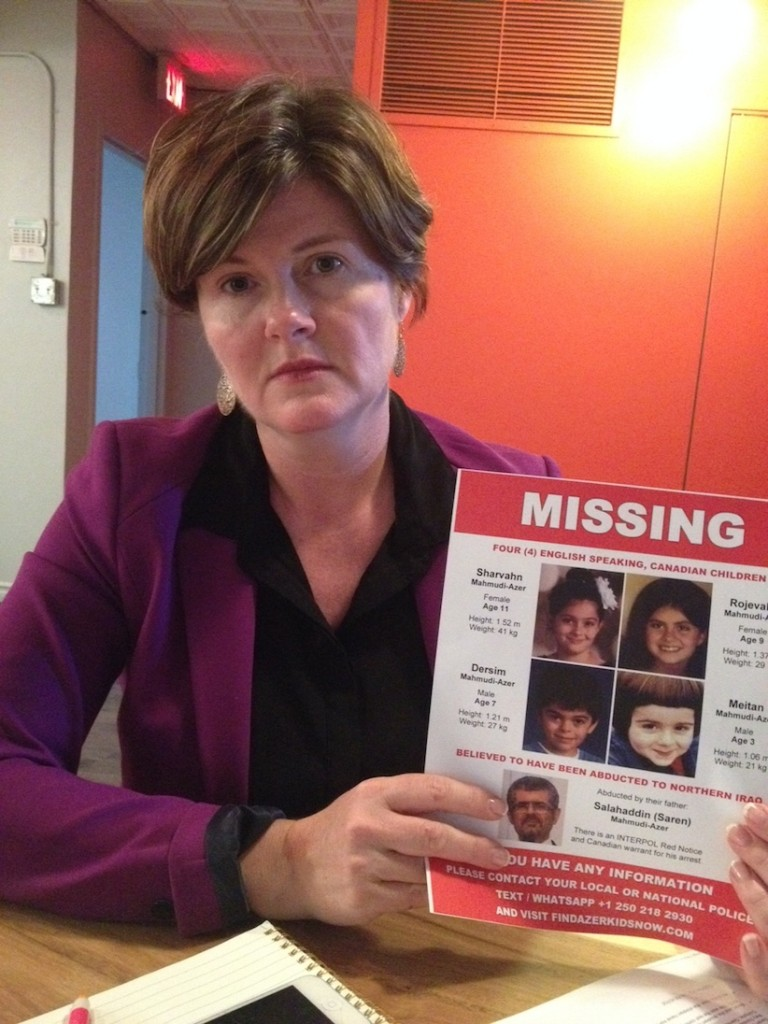 This week, Alison Azer — a British Columbia mother who alleges her four children were abducted by their father — met with Prime Minister Justin Trudeau, who assured her the case is now on his desk. It is believed the Azer children are living in Iran with Azer’s ex-husband, Saren Azer. On Friday, Evan Solomon interviewed Azer. Here is an edited transcript of their conversation.

Q: Alison, tell us about your meeting with Justin Trudeau.

A: I would say I’ve been persistently asking for a meeting with the Prime Minister since about March. It was great to see it come to fruition. So we met with Prime Minister Trudeau and his chief of staff, Katie Telford. Omar Alghabra, the parliamentary secretary, was there, whom I’ve met I think three or four times previously. Somebody from the department. And then my sister Elizabeth and her husband, Jan, came with me. The meeting I think was about 20 minutes. The feedback that I’ve had from the departmental official was that my tone was warm but direct, and that I feel like I used my time well to really impress upon the Prime Minister how important it was that the Azer children[‘s file] landed on his desk and stayed on his desk until the kids came home.

What was his reaction when you told him that you’d been waiting nine months to get your four children back? What did he tell you?

So the nine months is split two-thirds/one-third at this point. They were in a rebel-held territory in northern Iraq, what most people would call a war zone because bombs were falling intermittently. In and around February, Saren crossed illegally with the children into Iran, and as far as we know, he’s been there since. So the Prime Minister did a lot of listening. He asked some good questions. I wanted to get the point across to him that could he imagine one day having his children kidnapped. Could he imagine one week. I have been living this for nine months. There were times in our interview where I did feel I was speaking to the head of government, and there were times where I knew I was speaking to a father. And it was at those times that I think he really understood the depth of my impatience and the reason for my utter tenacity and determination in ensuring that the plight of my children, four abducted Canadian kids, reached his office and stayed in his office. He has to take responsibility for bringing my children home.

Your ex-husband is the subject of what’s called a red notice from Interpol. He’s wanted. What exactly can Canada do, given the fact that the previous government closed down the embassy in Tehran, although this Liberal government has promised to reopen it? What instruments do they have available to actually to get your children?

So they have this instrument called the telephone. Countries don’t need formal diplomatic relations to be able to make phone contact. Iran is motivated to continue opening up to the West. We saw it about a month ago, a well-heeled delegation from the European Union go into Tehran. They were well received. So Iran is motivated to open up diplomatically, commercially. They’re waiting. They’re waiting for Canada to reach out to them and to articulate this country’s desire to have the children returned. We know that, you know, it’s a kind of a different angle, but for example, the Canadian company, Bombardier, is very, very motivated to have access to Iranian aviation markets. The government is being nudged by many sectors in Canadian society, including consular cases. And I would say that the Azer children, we’re at the top of the file, at the top of the pile.

Did you make a specific request? Did you ask Justin Trudeau, as the Prime Minister, to call the head of state in Iran?

I sure did. He was well aware of our campaign, Make the Call, asking Prime Minister Trudeau to call President Hassan Rouhani. To date, he has not made that call. A few months ago, when we knew that the children were still in northern Iraq, I’d made a similar but different request, that Prime Minister Trudeau pick up the phone and call Masoud Barzani, who is the head of the KRG [in Kurdistan].  Canada has extremely good relations with the Kurdistan Regional Government; in fact they’re asymmetrical. The Kurds of course are needing more from Canada at this time, and Canada is in many ways complying. When I saw the Prime Minister, I asked him: OK, I’m hearing that you haven’t yet made the call to Rouhani. Did you follow through and make the call to Barzani of the KRG? And he said, “No, I didn’t,” and now the children are in Iran anyway. I said well, as we speak, Kurdish President Barzani is in Tehran meeting Rouhani. Had you made that call, it’s really possible that he could be speaking on behalf of Canada and the Azer children in Tehran. I want more action. I want more urgency. I want a degree of imagination from the government. They can’t be thinking about it in terms of bilateral relations. They need to be thinking about it in terms of our assets in the region. And we’ve got such good relations with the Kurds. Why wouldn’t they have tried to optimize those relations to help open some doors with Iran? 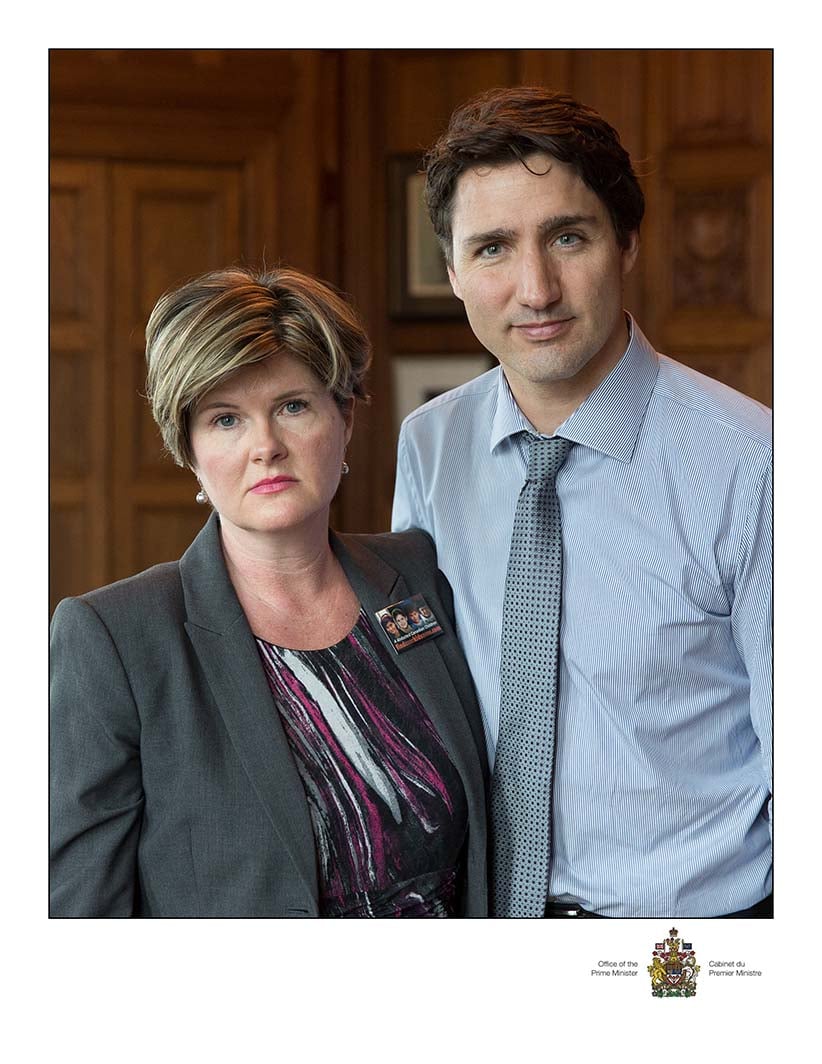 Talk about the timeline. You’ve raised this issue with the Prime Minister face to face; Rona Ambrose, the leader of the Opposition; Thomas Mulcair. And yet it’s been nine months. In that period, your ex-husband just posted a Facebook post with pictures of your children on it. What was your reaction to that? What impact has that had?

You know, I’m a mom who hasn’t seen her kids in nine months. But those weren’t the first photographs I’ve seen of my children since they’ve been kidnapped. I’ve probably had a dozen photos and videos, and kind of narrative of where my kids are and what they’re doing. It wouldn’t surprise most people that the photographs that I’ve seen don’t bear a lot of resemblance to what he’s posted, and that’s his prerogative. He is after all an international fugitive, a wanted man. What I read in Saren’s words – because, after all, I was married to him for over 10 years, I’ve known him since 1999. I know the tone, I know the phrases that are correlated to desperation and panic. If his life, and, by extension, as he suggests, the lives of the children, are so blissful, you’re a wanted fugitive, just put your head down and lead your so-called blissful life. The only reason, in my opinion, that he is speaking out now or breaking the silence, I think were some of the phrases that I’ve heard, is because he’s not doing very well. He can’t get work in Iran because his credentials are those of a wanted fugitive. He’s gone back to a country that he said would execute him if he ever returned. He’s putting his family there – his mom, his four brothers, four sisters, and their families – in a really precarious set of circumstances. He’s a desperate man, and that’s what I saw in that exercise of him emerging on social media.

What’s the next step? Where do you go from here? You’ve met the Prime Minister. What do you want to see now?

I am an extremely impatient woman. But having said that, I do feel I should give the Prime Minister and his staff a reasonable amount of time to follow through with some of the commitments that they made on the file. I continue to feel heartened by the thousands of Canadians who are mobilizing for my children, whether that’s signing the petition, contacting their own members of Parliament, writing, making international connections, making connections into Iran. I’ve been so touched by those efforts. And I’ve been really humbled by the people from Kurdistan and from Iran who’ve reached out to me. I don’t think it’s necessarily safe or possibly without consequence for them to do the kind of things that they’re doing. They write to me and they say I understand you’re a mom with a broken heart, I saw your ex-husband — they call him Dr. Saren — I saw Dr. Saren running across the street with your son, looking both ways. He’s on the run. One woman managed to shoot a 30-second video. A woman in an Iranian city follows my ex-husband to try and get me a video.

These are the gestures that really remind me of the goodness that exists and that sense of injustice and unlawfulness that’s occurred here. It’s not a custody battle being played out thousands of miles away. This is an international fugitive that has stolen children from their childhood, denied them a mom, denied them my parents. My mom is 85, my dad is turning 88. And they’re doing as well as they can be expected to do, but my dad’s health isn’t great. And he doesn’t know, and I don’t know, if he’s going to see those kids again.