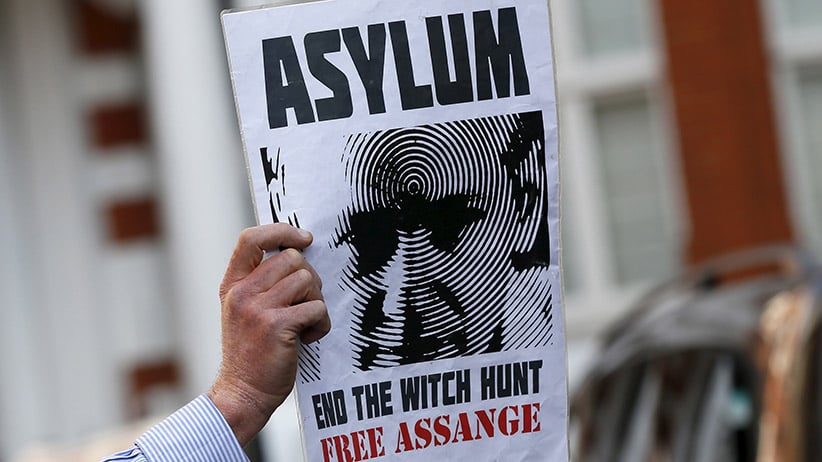 The costs for Ecuador hosting Assange were once minor. Now, the stakes have been raised. Stefan Wermuth/Reuters

QUITO, Ecuador – WikiLeaks founder Julian Assange is finding himself in open conflict with his Ecuadorean protectors as the group’s latest dump targeting Hillary Clinton’s presidential campaign runs afoul of the South American government’s goal of warming up to Washington.

Ecuador’s move to cut off his internet access at its embassy in London was a stinging rebuke from leftist President Rafael Correa, who in 2012 heralded Assange as a digital-age Robin Hood and granted him asylum over protests from the United States, the United Kingdom and Sweden, where he faces allegations of rape.

Correa’s government said Tuesday that WikiLeaks’ publication of a trove of damaging emails from Clinton’s campaign had impacted the U.S. election in violation of Ecuador’s traditional respect for other nations’ sovereignty.

Analysts say Correa is unlikely to now kick Assange out into the streets of London where he faces certain arrest. But allowing him to keep leaking secrets from the embassy risks putting the small Andean nation unwittingly on Russia’s side of a brewing cyber-battle with the United States, Ecuador’s top trade partner, at a time of deep economic stress.

“Before, the costs for Ecuador of hosting Assange were minor,” said Santiago Basabe, a political analyst at the Latin American School of Social Sciences in Quito. “But they are growing bigger now because they involve questions of U.S. national security, its tense relations with Russia and the presidential elections.”

The cascade of disclosures of Democratic operatives’ hacked emails, including this week’s publication of Clinton’s speeches to Wall Street investment bank Goldman Sachs, has been hailed by Republican candidate Donald Trump as evidence of his rival’s dishonesty. However, U.S. intelligence agents say the hack is the work of the Kremlin, although it’s not clear how the files ended up with WikiLeaks.

Regardless, Ecuador has plenty of reasons to try to curry favour with Washington.

The oil-dependent, dollarized economy is fighting a recession made worse by low crude prices, a destructive earthquake in April and a strong U.S. dollar. Adding to the uncertainty is Correa’s imminent departure from office after a decade in power that provided a sense of stability after years of coups and revolving-door presidencies.

Analysts say whoever wins February’s election – Correa’s preferred successor currently leads polls – is almost certain to turn to the International Monetary Fund for a bailout. In such a scenario the support of the Washington, the biggest shareholder in the IMF, will be key in determining how severe an austerity program is required.

“Assange has inserted Ecuador in the U.S. presidential campaign and exposed it to retaliation in case Clinton wins,” said former Foreign Minister Mauricio Gandara, adding that the publication of stolen documents is considered a crime in Ecuador.

Correa, who in 2009 closed the only U.S. military base in South America and two years later expelled the U.S. ambassador, still peppers his speeches with anti-Yankee harangues in the mould of the late Venezuelan President Hugo Chavez.

But with Venezuela in economic freefall and ideological allies losing power in countries like Argentina and Brazil, Correa has quietly extended an olive branch to the Obama administration and sought to deepen commercial ties. This week he’s hosting a U.S. trade delegation.

“For the good of the United States and the world, and for my personal appreciation of her, I’d like to see Hillary win,” he said.

Tensions between Assange and his hosts have surfaced before. In 2013, Correa criticized him for shooting a video from the embassy mocking Australian politicians during a political campaign.

On Tuesday, Ecuador said WikiLeaks’ “journalistic activities” would not be affected by the “temporary restrictions” on Assange’s communications.

Assange accused Ecuador of bowing to U.S. pressure and alleged that Secretary of State John Kerry discussed the issue with Correa last month in Colombia, something both Washington and Quito deny.

It seems unlikely he will submit to the internet ban quietly. Over the weekend WikiLeaks released three lines of code it described as “pre-commitments,” labeling them “John Kerry,” ”Ecuador,“ and ”FCO“ – an apparent reference to Britain’s Foreign and Commonwealth Office. Pre-commitments are cryptographic functions that can be used to verify the integrity of material released subsequently.

Security experts interpreted that as a warning to the named parties that WikiLeaks has ammunition in reserve that could embarrass his hosts as well.

For most Ecuadoreans, Assange’s case seems like a Hollywood spy movie with little bearing on their daily life. But even Correa’s opponents have shown little enthusiasm for revoking the Australian’s asylum.

“We can’t just throw him out of the embassy from night to day because he could be exposed to risks,” opposition presidential candidate Guillermo Lasso said last month, even while arguing that Assange was breaking the conditions of his asylum.

AP writers Joshua Goodman in Bogota, Colombia, and Raphael Satter in Paris contributed to this report.