Patrick Fox said he created the site about his ex-wife to cause 'as much damage to her reputation and life as possible.' 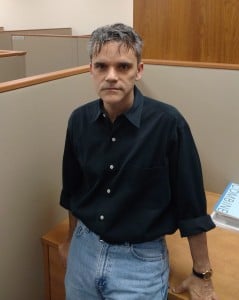 Patrick Fox of Burnaby, B.C., shown in this undated handout image, says he created a website about his ex-wife to do as much damage to her life and reputation as possible but he would not physically harm her. THE CANADIAN PRESS/HO-Patrick Fox

VANCOUVER – The British Columbia Crown’s decision not to charge a man who created a revenge website to destroy his ex-wife’s reputation reveals the limits of criminal harassment law in the digital age, experts say.

The Crown said it could not conclude the woman had an “objective basis to fear for her safety.” The website includes private photos, her address and phone number and describes her as a white supremacist, child abuser and drug addict.

“I do think it’s worth having a conversation as a society to find out whether or not ‘objective fear for your safety’ is in fact the right threshold, when more and more harassment is taking place online,” said David Fraser, an Internet and privacy lawyer.

“I don’t suggest dropping it so low that you just have to hurt somebody’s feelings, but maybe that line is a little bit too high in order to deal with significant cases of purposeful harassment.”

The case involving a B.C. man. and an Arizona woman has prompted criticism of Canadian law enforcement. While experts said the high threshold set by criminal harassment law plays a role, they also urged the Crown and police to take another look at the case.

Patrick Fox, whose birth name is Richard Riess, said in an interview that he created the site about his ex-wife Desiree Capuano to cause “as much damage to her reputation and life as possible,” but that he would never physically harm her.

He said he would only take the site down if she reached a low point in her life that satisfied him or if she died. He said it “would be great” if she killed herself, but it isn’t a goal of the site.

“I just don’t believe that she really brings anything positive or good to the world at all, and I don’t think the world is going to be worse off when she ceases to exist.”

The couple separated in 2001, when their son was a baby. Capuano alleged that Fox hid the child from her for years, while Fox said she abandoned the boy. He was later convicted of perjury and deported from the U.S. in 2013, but he blames Capuano for calling authorities.

Capuano now has custody of their son and lives near Tucson, Ariz. She said she lives with constant stress and fear and has struggled to find work after being laid off months ago. At one point he sent her colleagues links to the website, she said.

Fox has also sent her hundreds of threatening emails, some including photos of his gun licence and a spot where he said he could cross the border, she said.

She vehemently denied Fox’s allegations that she’s a child abuser, white supremacist or drug addict. She said she has not launched a defamation suit because she can’t afford the legal costs.

She noted that a recent Twitter harassment trial in Ontario resulted in an acquittal because the judge could not conclude the fear of the two complainants was reasonable. She said the B.C. case appears more egregious and could fall within criminal harassment law.

“When this provision was drafted in the early 1990s, people weren’t thinking of cyber abuse. They were thinking of men who are physically following and threatening their former partners.”

“This assessment included the fact that the two parties involved lived in different countries and the perpetrator had been deported from the U.S.”

B.C. Justice Minister Suzanne Anton left the door open Saturday to the possibility of authorities taking another look at the case.

“I am advised by the Branch that if the police provide additional evidence that might affect the Crown’s decision on whether to approve charges, the case could be revisited,” Anton said in an emailed statement. “However, it would be up to police to determine whether to re-submit its original Report to Crown Counsel to the Branch, with any additional evidence included.”