Michael Petrou on false hope and the president's bluff 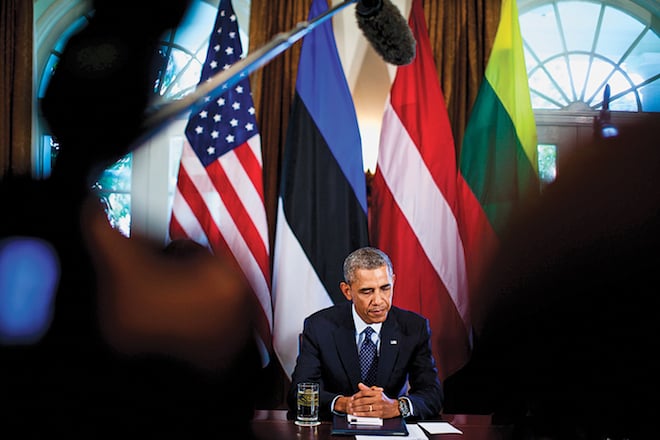 Perhaps the only way U.S. President Barack Obama might salvage some of his — and his country’s — credibility that has been so degraded by his handling of the Syrian war would be to come right out and admit that when he warned last year that the use of chemical weapons was a “red line” that would “change my calculus,” he didn’t really mean it, or at least he never thought his bluff would be called.

He might add that his assertion a year earlier that “the future of Syria must be determined by its people, but President Bashar al-Assad is standing in their way” was merely an observation, and not a foundation for American foreign policy regarding the country.

That at least would save Syrians from the false hope that anyone — other than jihad-funders from the Gulf — is going to help them. And it would save the world the pain of watching Washington publicly plotting an ever more feeble military mission.

On Monday Secretary of State John Kerry said that any military strike would be an “unbelievably small, limited kind of effort.” What, then, even a liberal interventionist might ask, would be the point?

America appeared to be gearing up for a war without a purpose other than the vaguely defined need to send a message. Obama said Assad had to go before the Syrian dictator started gassing children, but now that he had the American president wasn’t willing to invest military force in forcing his exit.

“The administration rhetorically committed itself to a policy that it has been unwilling to carry out,” Brookings Institution fellow William McCants said in an interview with Maclean’s. “This is the sort of muddling-through response you get to a chemical weapons attack.”

Obama has always been reluctant to get involved militarily in Syria. By July 2012 American intelligence officials believed Syrian government forces had used chemical weapons, and in April of this year Defence Secretary Chuck Hagel went public with America’s conclusions. The red line appeared to have been crossed. But it was not until June that Obama authorized the provision of arms to Syrian rebels. These weapons have reportedly not yet been delivered.

The most recent chemical attack, on August 21, was much more lethal than anything before. More than 1,400 Syrians, including more than 400 children, died, according to American intelligence. Obama called for an American military strike, but only a “limited and proportional … shot across the bow.”

War seemed imminent, and then Obama stepped back. He said he would ask for approval from Congress. British Prime Minister David Cameron had done something similar — seeking, unsuccessfully, the backing of Parliament. Cameron recalled Parliament for the vote. Obama would not be rushed. Congress would convene as scheduled. In the meantime it became clear that he might lose the congressional vote.

In an effort to win support from hawks who favoured a more robust intervention, Obama briefly hinted at a policy of regime change. “We have a broader strategy that will allow us to upgrade the capabilities of the opposition and allow Syria to ultimately free itself,” he said last week.

Polls still showed an unconvinced Congress and American people. Obama did a round of interviews with American networks Monday. But rather than build a case for this “broader strategy,” Obama again underlined how limited any American military action would be. “My narrow concern right now is making sure Assad does not use those chemical weapons again,” he told Fox News.

Fortunately for Obama, if not the Syrian people, he may be able to claim to have addressed this narrow concern without firing a shot. Russia has proposed a diplomatic solution that would see Syria relinquish its chemical weapons in order to avoid an American strike. Syria said it welcomed the initiative. Obama, in interviews Monday, said he was skeptical but called the move “potentially positive” and said he would pause plans for an attack were Syria to give up its chemical arsenal.

Verifying that Syria had done so in the midst of a civil war would be extremely difficult and time-consuming. U.N. inspectors were never able to conclusively determine what Iraq had done with its chemical stores before the 2003 war. And buying time for Assad may be what is motivating Russia in the first place.

Obama’s willingness to spare Assad any American missile strikes if he gives up his stocks of sarin gas also represents another shift and reduction in what America is trying to accomplish in Syria. Obama had originally proposed military strikes on Syria not to prevent Assad from using chemical weapons, but because he already had done so.

One might argue that losing his chemical weapons would be something of a punishment for Assad. But his forces have killed many more people with guns and bombs. And, besides, it seems he’s gotten quite a lot of use out of his chemical arsenal already.

If the Russian proposal goes ahead, Obama will say his threat of military strikes forced Assad to disarm. Assad will say he faced down American threats and declare victory. The civil war, with all its attendant abuses and horrors, will rage on.