BARCELONA, Spain – Police on Friday shot and killed five people wearing fake bomb belts who staged a car attack in a seaside resort in Spain’s Catalonia region hours after a van plowed into pedestrians on a busy Barcelona promenade, killing at least 13 people and injuring over 100 others.

Authorities said the back-to-back vehicle attacks – as well as an explosion earlier this week elsewhere in Catalonia – were connected and the work of a large terrorist group. Three people were arrested, but the driver of the van used in the Barcelona attack remained at large and the manhunt intensified for the perpetrators of the latest European rampage claimed by the Islamic State group.

Authorities were still reeling from Thursday’s Barcelona attack when police in the popular seaside town of Cambrils, about 130 kilometres (80 miles) to the south, fatally shot five people near the town’s boardwalk who had plowed into a group of tourists and locals with their blue Audi 3. Six people, including a police officer, were injured, though it wasn’t clear how badly.

“They were fakes, but very well made, and it wasn’t until the bomb squad carried out the controlled explosion of one that they could determine they were fakes,” he said.

The Audi and a damaged police car were towed from the scene Friday.

The Cambrils attack came hours after a white van veered onto Barcelona’s picturesque Las Ramblas promenade and mowed down pedestrians, zig-zagging down the strip packed with locals and tourists from around the world.

Forn, told local radio RAC1 the Cambrils attack “follows the same trail. There is a connection.”

He told Onda Cero that the Cambrils and Barcelona attacks were being investigated together, as well as a Wednesday night explosion in the town of Alcanar in which one person was killed.

“We are not talking about a group of one or two people, but rather a numerous group,” he said. He added that the Alcanar explosion had been caused by butane tanks stored in a house, and that firefighters and police responding to the blast had been injured.

The Barcelona attack at the peak of Spain’s tourist season left victims sprawled across the street, spattered with blood and writhing in pain from broken limbs. Others were ushered inside shops by officers with their guns drawn or fled in panic, screaming and carrying young children in their arms.

“It was clearly a terror attack, intended to kill as many people as possible,” Josep Lluis Trapero, a senior police official for Spain’s Catalonia region told reporters late Thursday.

The Islamic State group claimed responsibility, saying in a statement on its Aamaq news agency that the attack was carried out by “soldiers of the Islamic State” in response to the extremist group’s calls for followers to target countries participating in the coalition trying to drive it from Syria and Iraq.

Cambrils Mayor Cami Mendoza said the town had taken precautions after the Barcelona attack, but that the suspects had centred their assault early Friday on the narrow path to Cambrils’s boardwalk, which is usually packed with locals and tourists late into the evening.

“We were on a terrace, like many others,” said bystander Jose Antonio Saez. “We heard the crash and intense gun shots, then the dead bodies on the floor, shot by the police. They had what looked like explosive belts on.”

Others described scenes of panic, and found safety inside bars and restaurants until police had secured the area.

Local resident Markel Artabe said he was heading to the seafront to get an ice cream when he heard the shots.

“We began to run. We saw one person lying on the pavement with a shot in his head then 20-30 metres further on we saw two more people, who must have been terrorists as they had explosive belts around them. We were worried so we hid.”

A third Barcelona suspect was arrested Friday in the northern town of Ripoll, where one of the two detained on Thursday had also been nabbed. The third arrest was made in Alcanar, where the gas explosion in a house was being investigated.

“There could be more people in Ripoll connected to the group,” Forn told TV3 television, adding that police were focusing their investigation on identifying the five dead in Cambrils as well as the driver of the Barcelona van. 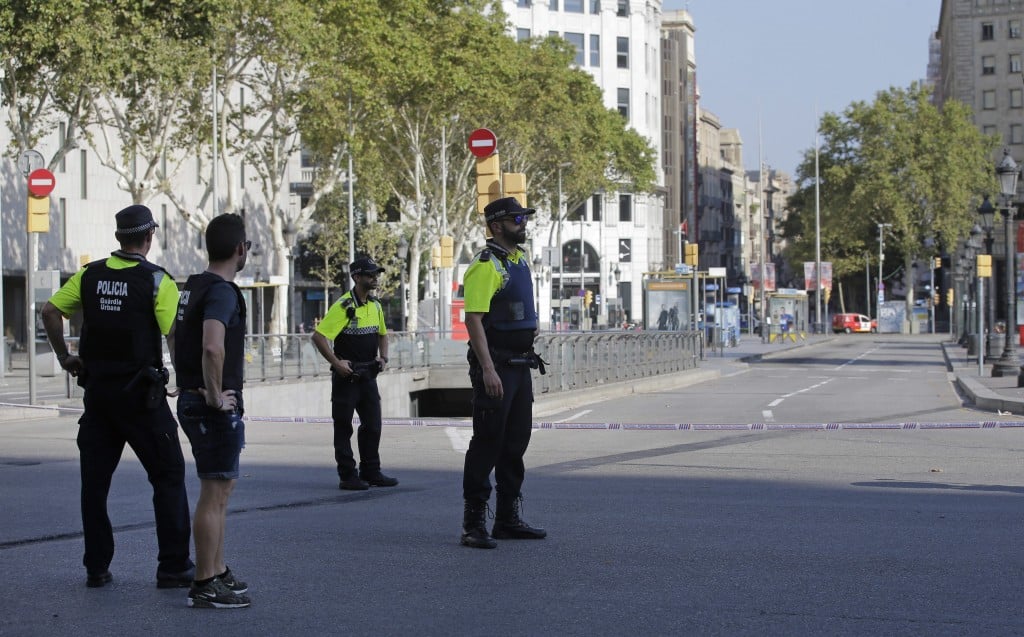 Police said the two suspects arrested Thursday were a Spanish national from Melilla, a Spanish-run Mediterranean seafront enclave in North Africa, and the other a Moroccan.

Spanish public broadcaster RTVE and other news outlets named one of the detained as Driss Oukabir, a French citizen of Moroccan origin. RTVE reported said Oukabir went to police in Ripoll to report that his identity documents had been stolen. Various Spanish media said the IDs with his name were found in the attack van and that he claimed his brother might have stolen them.

Media outlets ran photographs of Oukabir they said police had issued to identify one of the suspects. The regional police told The Associated Press that they had not distributed the photograph. They refused to say if he was one of the two detained.

The driver, however, remained at large.

“We don’t know if the driver is still in Barcelona or not, or what direction he fled in,” Forn, the Catalan interior minister, told SER Radio. “We had local police on the scene, but we were unable to shoot him, as the Ramblas were packed with people.”

The Catalan regional government said people from 24 countries were among those killed and injured in Barcelona.

Spanish Prime Minister Mariano Rajoy called the killings a “savage terrorist attack” and said Spaniards “are not just united in mourning, but especially in the firm determination to beat those who want to rob us of our values and our way of life.”

After the afternoon attack, Las Ramblas went into lockdown. Swarms of officers brandishing hand guns and automatic weapons launched a manhunt in the downtown district, ordering stores and cafes and public transport to shut down.

By Friday morning, the promenade had reopened to the public, and neighbours and tourist were allowed past police lines to go back to their homes and hotels. The city centre remained under heavy surveillance.

At noon Friday, a minute of silence honouring the victims was to be observed at the Plaza Catalunya, near the top of the Ramblas where the van attack started. Rajoy declared three days of national mourning.

Similar vehicle attacks have been carried out at tourist sites in France, Germany, Sweden and Britain.

“London, Brussels, Paris and some other European cities have had the same experience. It’s been Barcelona’s turn today,” said Carles Puigdemont, president of Catalonia’s government.

The bloodshed was Spain’s deadliest attack since 2004, when al-Qaida-inspired bombers killed 192 people in co-ordinated assaults on Madrid’s commuter trains. In the years since, Spanish authorities have arrested nearly 200 jihadists. The only deadly attacks were bombings claimed by the Basque separatist group ETA that killed five people over the past decade but it declared a cease-fire in 2011.

“Unfortunately, Spaniards know the absurd and irrational pain that terrorism causes. We have received blows like this in recent years, but we also that terrorists can be beaten,” Rajoy said.