Officially, Trump's height is six-foot-three, compared to Biden's five feet, 11.65 inches. But would that number stand up were the two of them to be photographed side-by-side? 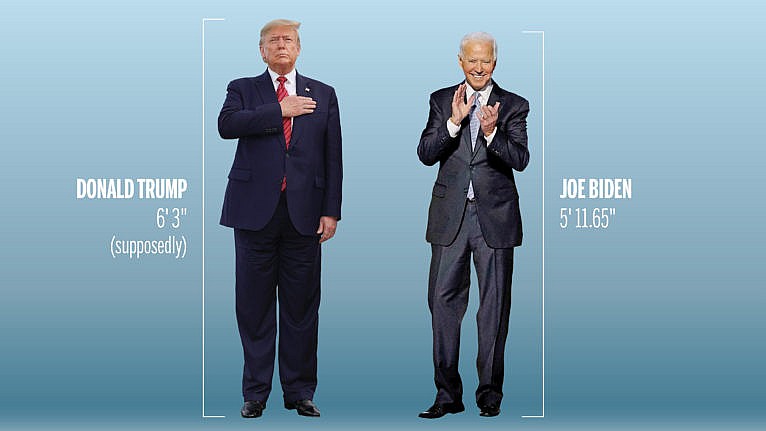 There are lots of ways to measure the differences between Joe Biden and Donald Trump, whether it be their temperament, actions or propensity for gaffes and lies. Then there are their official heights. It’s hardly the most important measure, but it may be one of the most illuminating. One is given to the second decimal point, the other appears to be more aspirational than accurate.

Joe Biden’s height is officially given as five feet, 11.65 inches, according to a detailed three-page medical history released by his physician in December. Biden could have asked his doctor to round that number up to six feet like many people who are a smidge under that mark would. He could have insisted that it be presented in metric (182 cm), which is used in the medical world, to forestall bemused reactions to a height measure given to two decimal points. He didn’t. Biden either a) doesn’t care or b) isn’t going to massage his doctor’s report to assuage his own vanity or c) both of the above.

Instead, along with his height was a lengthy list of his medical history, from serious (two brain aneurysms dealt with in 1988) to relatively mild, including that Biden has “mild diverticulitis” and has had “several localized, non-melanoma skin cancers” removed. It ends with his doctor stating, “Vice President Biden is a healthy, vigorous, 77-year-old male, who is fit to successfully execute the duties of the Presidency.”

That openness is in direct contrast to the secrecy and unbelievability that characterized the medical information about Trump that was released to the public. During the 2016 election campaign, Trump’s physician, Dr. Harold Bornstein, stated, “If elected, Mr. Trump, I can state unequivocally, will be the healthiest individual ever elected to the presidency,” even though Trump is an overweight senior citizen who adores fast food, steaks and ice cream and avoids exercise that doesn’t involve using an electric cart to zip around a golf course. Bornstein eventually revealed that Trump had dictated that fitness statement for his doctor to sign.

Donald Trump’s height is officially pegged at six feet, three inches by his White House doctor. However, that official statistic appears to be another of Trump’s myriad exaggerations, if one looks at photos of Trump standing next to other tall people whose heights are also publicly known. In a group shot of G7 leaders at their 2018 meeting, Trump was placed next to host Prime Minister Justin Trudeau (six-foot-two) on the flat dais and it was impossible not to see that the American president was noticeably shorter than the PM, even as Trudeau widened his stance, as if shrinking down a bit so as to not antagonize the thin-skinned president. It was to no avail: “A tall tale?” was the Daily Mail’s headline for the Trump-Trudeau height fracas.

At the following year’s G7 photo op, Trump moved to stand next to German chancellor Angela Merkel (five-foot-five) only to be foiled by his host, French President Emmanuel Macron, who escorted him to a position near Trudeau.

RELATED: The G7 group shot, where Donald Trump can’t hide from his height

Other height-comparison images are easy to find, including one in which Trump stood beside Sen. Ted Cruz (five-foot-10, on a good day) at a Republican presidential debate in 2016 and appears to be nowhere close to five inches taller than the Texan. There’s also a photo of Trump with quarterback Tom Brady (six foot four), in which Trump looks decidedly shorter, that also seems to indicate Trump was fibbing.

If that wasn’t enough, there’s the pesky fact that when Trump needed to divulge his height to a government on a legal document—applying for a New York driver’s licence in 2012—he chose six-foot-two-inches. (Politico got a copy of the legal ID in a freedom-of-information request.)

Biden picked a running mate who is equally comfortable with her height. Kamala Harris is five feet, two inches tall, according to the Encyclopedia Britannica, though IMDB.com puts her 1½ inches taller. Her most famous shoe brand is the flat Converse sneaker. She wears them because they are comfy.

Also in contrast to Biden and Harris, Donald Trump is notoriously vain about more than just his height: His coiffure is a carefully constructed bird’s nest while his orange visage is courtesy of Bronx Colors make-up (shade BHC06, to be precise). If he’d agreed to attend Biden’s inauguration, they’d have spent time standing next to each other. The compare-and-contrast would have been inevitable between the trim Biden and the obese outgoing president. Donald Trump lost the election. There was no way he was going to lose a battle to determine who’s the fairest of them all.