Bill Cosby goes to jail, but Andrea Constand has already done the time 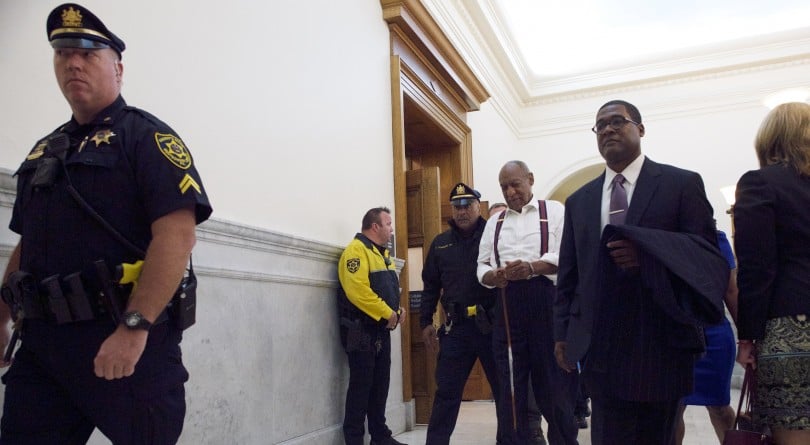 Bill Cosby is taken away in handcuffs after being sentenced to 3-10 years in his sexual assault retrial at the Montgomery County Courthouse on Sept. 25, 2018, in Norristown, PA. (Mark Makela/Getty Images)

In sentencing Bill Cosby to three to ten years in state prison for three counts of aggravated indecent assault against Andrea Constand on Tuesday, Judge Steven O’Neill made it eminently clear that he listened not only to Constand’s voice. He also  heard the voices of  the six “prior bad acts” witnesses who gave testimony during Cosby’s two criminal trials about how Cosby  assaulted them: one spoke at the 2016 trial that ended with a jury deadlock and five testified at the second trial. Speaking directly to Cosby in court, the judge said he considered the additional accusers’ testimony as “voices from the past, your past, Mr, Cosby, saying, ‘This happened to me at the defendants’ hands,’ six times over.”

It’s telling too that though Constand was the only complainant, the judge identified Cosby’s behaviour as serial in naming the 81-year-old a “sexually violent predator,” which requires him to attend  monthly counseling for rest of his life and register as a sex offender in Pennsylvania. The judge ignored defence attorney Joseph P. Green’s call for probation or house arrest due to Cosby’s advanced age and blindness. Cosby has committed no other crimes in the last 14 years, he’s unlikely to commit such a crime again, Green told the court. The assertion was chillingly countered by psychologist Kristen F. Dudley, who has assessed Cosby: “It is possible he has already met someone who could be a future victim,” she told the court.

Recognizing the voices of accusers who were not formal complainants is a watershed moment in the first high-profile post-#MeToo sexual assault trial. The #MeToo movement itself is traceable in part to Constand’s bravery going to Ontario police in 2005 to report Cosby had drugged and assaulted her in his suburban Philadelphia home the year before. She would be the first woman whose claims triggered a police investigation of sexual assault against Cosby. (In 2000, actress Lachele Covington filed a police report saying Cosby had inappropriately touched her while alone in his townhouse but it went nowhere.)

Judge O’Neill made it clear that he didn’t want #MeToo to permeate the 2018 trial, which proved impossible. During jury selection, he asked 120 potential jurors about any #MeToo bias. Only one was not familiar with the movement. Now sentencing the first major celebrity to jail time for sexual assault will also be viewed a landmark. Cosby clearly didn’t see incarceration as a possibility on Tuesday. When the prosecutor read Cosby the details of registering as a sex offender, the disgraced comedian asked if he would have to notify police of overnight trips to different cities. (Under Pennsylvania law, Cosby will have to serve the full minimum of three years before he can be eligible for parole. The maximum possible sentence was five to 10 years behind bars.)

O’Neill’s sentencing falls squarely within sentencing guidelines. He made it clear Cosby didn’t get special treatment. “No one is above the law,” the judge told the court. “And no one should be treated differently or disproportionately because of who they are or because of wealth, celebrity or even philanthropy.” The judge also signalled Cosby’s sentence was long overdue: “It is time for justice in a court of law,” he said.  “The day has come. The time has come.”

Yet there is no balancing justice’s scale in terms of  the enduring trauma Cosby caused. That was evident in the presence of 33 of Cosby’s accusers in the Montgomery County Court in Morristown, Pa. Their cases will never be heard in a court of law, many because the statute of limitations ran out. (The multiple allegations against Cosby led to many states dropping statute of limitations in sexual assault cases.)

Nowhere was the justice imbalance more harrowingly evident, however, than in the powerful, devastating five-page victim impact statement  Constand read in court on Monday that would be referred to repeatedly by Judge O’Neill in his sentencing. “Bill Cosby took my beautiful, healthy young spirit and crushed it,” Constand told the court. “He robbed me of my health and vitality, my open nature, and my trust in myself and others.” She was “a young woman brimming with confidence and looking forward to a future bright with possibilities” when the entertainer drugged and assaulted her at his suburban Philadelphia home in January 2004: “Now, almost 15 years later, I’m a middle-aged woman who’s been stuck in a holding pattern for most of her adult life, unable to heal fully or to move forward.”

Constand was befriended by the entertainer as a 30-year-old employee of Temple University, Cosby’s alma mater, a place where he wielded huge influence. He invited her for dinner and advised her on her career.  The night of the assault was “when life as I knew it came to an abrupt halt,” Constand said.  She felt “completely helpless”: “I could not move my arms or legs. I couldn’t speak or even remain conscious. I was completely vulnerable, and powerless to protect myself.”

Her description of the aftermath reveals how sexual assault victims internalize the experience: “I wasn’t sure what had actually happened but the pain spoke volumes,” she told the court. “The shame was overwhelming. Self-doubt and confusion kept me from turning to my family or friends as I normally did. I felt completely alone, unable to trust anyone, including myself.” That trauma continued after she returned to her family home in Pickering, Ont.: “I couldn’t talk, eat, sleep or socialize,” she said. She had nightmares. She eventually confided in her mother, Gianna, who demanded a full explanation from Cosby and then, justice.

In court, Constand spoke of how difficult reporting to police was in 2005, at time when Cosby’s fame was at a zenith: he was the beloved Dr. Cliff Huxtable, or “America’s Dad,” from The Cosby Show. He was a cultural hero known for eradicating racial barriers, promoting education and supporting worthy social causes: “Reporting the assault to the Durham Regional police in Toronto only intensified the fear and pain, making me feel more vulnerable and ashamed than ever.” When that went public, it emboldened  dozens of women, eventually close to 60,  to come forward with similar reports of being drugged and sexually violated by Cosby in  incidents dating back decades. For years, these women were denounced and discredited.

Constand’s attempts to launch civil claims against Cosby were met with threats and intimidation tactics by his legal team that worked, she told the court: “The psychological, emotional and financial bullying included a slander campaign in the media and left my entire family reeling in shock and disbelief.” Criminal charges were laid in 2015, just before Pennsylvania’s statute of limitations on the case expired; Cosby pleaded “not guilty” to three counts of aggravated assault at both trials; he admitted he had sexual activity with Constand, but said it was consensual.

In court on Tuesday, Constand outlined the enormous pressure of being the sole complainant in two trials: “I knew that how my testimony was perceived ― that how I was perceived ― would have an impact on every member of the jury and on the future mental and emotional well-being of every sexual assault victim who came before me. But I had to testify. It was the right thing to do, and I wanted to do the right thing, even if it was the most difficult thing I’ve ever done. When the first trial ended in a mistrial, I didn’t hesitate to step up again.”

Cosby may now spend the next three to ten years in jail, but his behaviour has stolen an incalculable amount from Constand. Her life now revolves around her work as a therapeutic massage practitioner, she said: “I’ve never married and I have no partner. I live alone. My dogs are my constant companions, and the members of my immediate family are my closest friends.”

Within Constand’s statement can also be found an inkling of optimism, and the trust in herself that Cosby took from her: “I know now that I am one of the lucky ones,”  she said. She also uttered the most hopeful line to emerge from the landmark saga: “Instead of looking back, I am looking forward to looking forward. I want to get to the place where the person I was meant to be gets a second chance.”