By Michael MacDonald and Alison Auld, The Canadian Press February 13, 2017 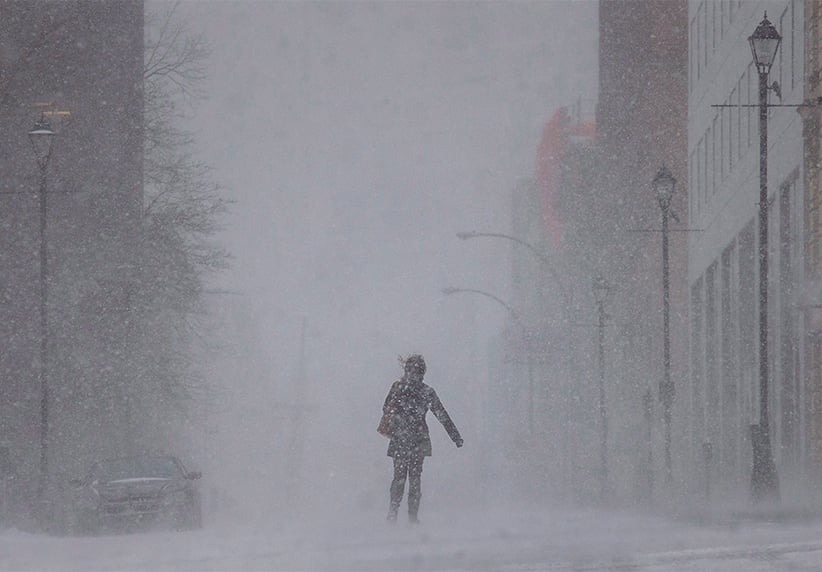 A pedestrian makes her way through wind-swept snow on Granville Street in downtown Halifax during a winter storm on Monday, February 8, 2016. (Darren Calabrese/CP)

HALIFAX – A massive, slow-moving blizzard has descended on the Maritimes, lashing the region with powerful, icy gusts that brought much of the area to a snow-caked standstill.

Police warned drivers to stay off the roads amid white-out conditions. Public transit was shut down in several communities, and government offices were closed in Nova Scotia and in southern New Brunswick. Schools were shuttered and air travel also ground to a halt.

Amid swirling curtains of snow, Halifax resident Rae Brown was shovelling off her covered porch, which had a drift building up by the front door. The sidewalk on Tulip Street was choked with a metre of snow left behind by a front-end loader pushing a massive plow.

At that point, the wind was howling along the street, gusting at over 80 kilometres per hour.

Brown, a teacher, winced as icy shards of ice and snow hit her face.

“This is definitely a proper winter storm — a blizzard,” she said, her parka and knitted mittens caked in snow. “It’s very blustery … The snow is pretty fluffy. So it’s getting picked up and blown around.”

In Nova Scotia, Environment Canada meteorologist Tracey Talbot said winds were gusting to 110 kilometres per hour just outside of Halifax, and up to 20 centimetres of snow had fallen in the morning.

The big, brawny storm was expected to keep pounding the region until Tuesday.

“This is definitely a very intense storm for this winter and even for last winter,” Talbot said in an interview.

Snowfall totals across Nova Scotia were expected to range from 20 to 60 centimetres. However, some areas could be buried under as much as 75 centimetres amid higher drifts. Storm surges were also expected along much of the Atlantic coast.

New Brunswick and Prince Edward Island were expected to get between 25 and 40 centimetres of snow, with wind gusts up to 100 km/h.

Halifax resident Paul Giroux said the blizzard rated a seven or eight on a scale of 1 to 10. He said a blizzard on Feb. 19, 2004, known as White Juan, was far worse. That storm churned out gusts in excess of 124 kilometres per hour and buried the region under almost a metre of snow.

“It was worse than this,” he said, looking over his snow-choked glasses. “It’s a lot of blowing and stuff. Yeah, there’s a fair amount of snow, but we’ve lived through worse.”

Giroux said he has lived in the Dartmouth area for more than 70 years.

“Hopefully, we won’t lose our power,” he said as a gust almost toppled him over. “But if we do, I’ve got extra firewood in. We have candles and food in our fridge and freezer.”

“The storm surge and strong winds can make the shoreline dangerous very quickly,” said Zach Churchill, the minister responsible for Emergency Management Office. “I urge Nova Scotians to stay away from the coast during this storm.”

Peter Spurway, who lives about 35 minutes outside Halifax in West Lawrencetown, said the visibility at his property was near zero as winds whipped around his home as he tried to get to his barn to feed three ponies. He said he had to drive a truck to the barn, adding that it was tough to stand up in the face of the fierce winds.

“Snow is going parallel to the ground at this point,” he said from his home. “We just drove back into the open which was treacherous in that it was very, very hard to see because of the big gusts.”

Spurway, who is also communications advisor for Halifax Stanfield International Airport, said the airport departures and arrivals boards were “a sea of red” as flights were being cancelled one by one.

Nova Scotia Power, the province’s privately owned electric utility, said the storm had knocked out power to about 13,000 customers, with many of them in the Lunenburg area.

“It will take time to get to sites as the storm progresses,” spokesman Matt Drover said in a statement. “We expect restoration efforts will be hampered.”

He said it’s not safe for work crews to use bucket boom trucks when winds are over 80 kilometres per hour.

The blizzard moved into southern New Bruswick around 10 p.m. Transit buses were pulled from the roads in Fredericton, Saint John and Moncton.

“Public safety is the number one priority for everyone, and the less people we have on the street, the less chance there is of an accident,” said Isabelle LeBlanc, spokeswoman for the City of Moncton.

In Saint John, N.B., city officials asked parents to keep children from playing in the streets and tunnelling in snowbanks while the snowplows were still at work.

NB Power added 20 extra work crews to deal with outages. By noon, there were roughly 775 NB Power customers without power, mainly in the southwest and northeastern parts of the province.

Utility spokeswoman Marie-Andree Bolduc said there may be delays getting to the affected areas.

“Whiteout conditions are obviously a concern. If the roads are too dangerous for the crews to head out then we will have to wait a little while until the storm passes,” she said.

Bolduc stressed that people should be prepared with emergency kits and not to use generators inside garages or homes.

During the recent ice storm in New Brunswick, two people died of carbon monoxide poisoning while 34 others were hospitalized.

Phil Mooney, deputy mayor of Yarmouth, N.S., said winds were blowing around his house since the storm set in at about midnight. But he said most people were heeding warnings to stay put.

“It’s blowing, but not as hard as I thought it would be _ it’s not over yet though, ” he said. “We just got to hunker down.”

In Cape Breton, councillor Jim Mustard said they were seeing stiff winds but little snow in the morning.

“It’s pushing on you, you can’t really stand still,” he said from Margaree, N.S.