By Jerry Harmer and Todd Pitman, The Associated Press August 12, 2016 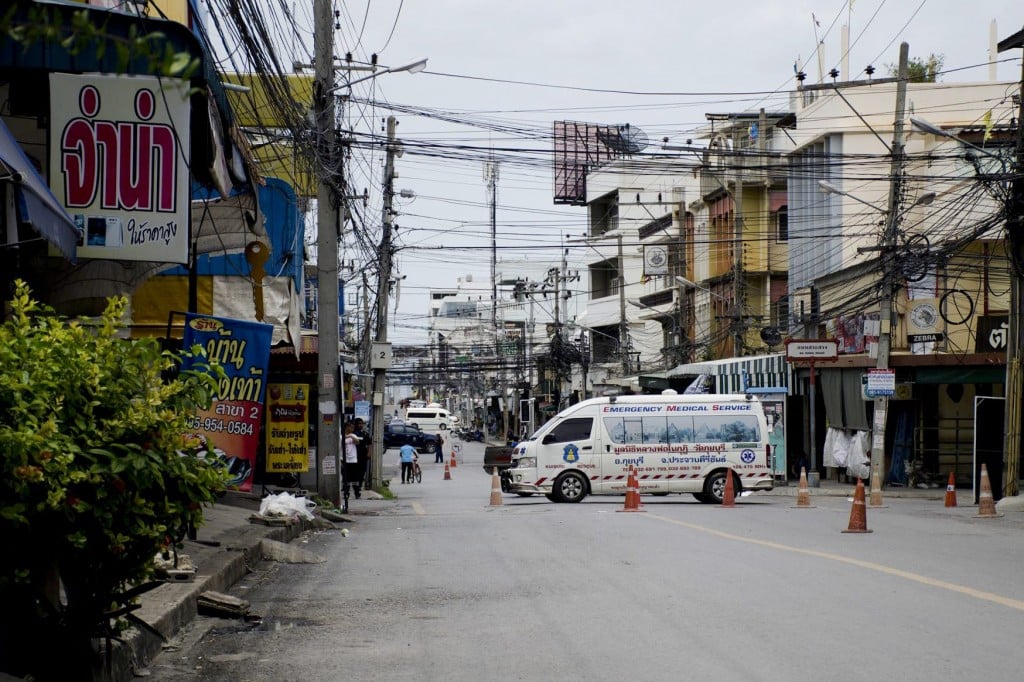 HUA HIN, Thailand – Attackers using firebombs and homemade explosives struck a series of popular resort cities and beach towns across Thailand in some of the worst violence to hit the country since a military coup two years ago. At least four people were killed and dozens wounded, including 11 foreigners.

It was not clear who was behind the attacks Thursday and Friday, which followed a successful referendum held last weekend on a new constitution that critics say will bolster the military’s power for years to come.

The attacks occurred south of Bangkok and several of the blasts – including one on a beach in Patong in the tourist town of Phuket and four in the seaside resort city of Hua Hin – appeared designed to strike the tourism industry, which provides vital income to the government.

Thailand’s economy has sagged since the military seized power in a 2014 coup. But tourism has remained one of the few bright spots, with visitors rising to 30 million in 2015 and more than 14 million having visited by May 2016, according to the latest official figures.

Police said four of the injured tourists were from Germany, two from Italy and one from Austria. The Netherlands said four of its citizens were also wounded.

“It is not yet clear who is behind these attacks,” German Foreign Minister Frank-Walter Steinmeier said in a statement. “But one thing is clear: no political aim justifies violence and attacks on innocent people.”

Thai Prime Minister Prayuth Chan-ocha said the government was doing the best it “could to provide security to the country. … We have to band together and stay strong.”

“Why has it happened now when the country is improving … Who (did it)? Who doesn’t want to see Thailand getting better? Which group? Go find out for me.”

Police said they were investigating all leads and had ruled out links to international militant groups.

Royal Thai Police Col. Krisana Patanacharoen said it was “too early to conclude” who was behind the attacks. But he said the bombings followed “a similar pattern used in the southern parts of the country” _ a reference to a low-level insurgency in the country’s Islamic south that has ground on for more than a decade and killed more than 5,000 people.

Southern militants fighting for greater autonomy have carried out sophisticated, co-ordinated attacks before, but most have hit three provinces in the far south that were not among those targeted Thursday and Friday.

The most devastating explosion occurred overnight in Hua Hin on a busy street filled with bars and restaurants. One Thai woman was killed and about 20 people were wounded, half of them foreigners, according to police Lt. Chaiyot Tisawong.

Gen. Sithichai Srisopacharoenrath, the superintendent of police in Hua Hin, said the bombs were hidden inside potted plants and were set off by remote control, about half an hour apart. The second blast caused the death and injuries. He said a Samsung cellphone had been recovered that they believe was used to detonate at least one of the bombs.

On Friday, debris and ball bearings could be seen strewn across the road as police investigated the scene. The blast damaged a pair of phone booths and shattered the window of a nearby Starbucks.

Many shops in the city centre closed afterward and normally bustling streets were empty, for good reason: Hua Hin was hit by another two bombs that exploded in quick succession Friday morning near a clock tower, killing one person and wounding four more.

Separate blasts were reported elsewhere in the south. One exploded on popular Loma Beach in Phuket city’s Patong district, injuring one person. Two more detonated half an hour apart in front of two police stations in Surat Thani in southern Thailand, killing one and wounding three. And two bombs exploded outside a market in Phang Nga, damaging two vehicles but causing no casualties.

On Thursday afternoon, a bomb blew up in the southern province of Trang – full of beautiful beaches and tourist islands – killing one person and injuring six, according to police and Thai press reports.

In Hua Hin, 51-year-old Italian Andrea Tazzioli said he “saw light, white light” after the second of Thursday night’s explosions, and that he immediately felt pain in his shoulder “like big fire.”

Speaking later at a hospital, he said he fell down and saw people “screaming, the glass broken, table broken, confusion.”

Tourist Shane Brett told the Australian Broadcasting Corp. from his hotel room that there was panic after the first Hua Hin explosion.

“I was at a bar in the main bar district in Hua Hin right outside the Hilton Hotel and at first I heard kind of a bang … and everyone kind of panicked,” Brett said.

He looked outside and saw people running. Half an hour later, heading back to his hotel, he saw “a good few people injured and the whole area just panicking … the whole area was just shut down with police cars, ambulances.”

Thailand has been plagued by political violence, including several bombings, since the populist billionaire Thaksin Shinawatra was ousted as prime minister in a 2006 military coup after demonstrations accused him of corruption, abuse of power and insulting King Bhumibol Adulyadej.

Thaksin’s ouster set off sometimes-bloody battles for power between his supporters and opponents, who include the military. The government of his sister Yingluck Shinawatra, who became prime minister in 2011, was toppled in the country’s last coup in 2014.

On Sunday, Thai voters approved a referendum on a new constitution that is supposed to lead to an election next year. Critics say it is undemocratic and is fashioned to keep the military in control for at least five more years even if a free election is held.

Friday’s blast took place on the birthday of Thailand’s Queen Sirikit. The junta has repeatedly said that defending the monarchy is a top priority, and the army and its allies are keen to ensure a smooth succession for Bhumibol, who is the world’s longest reigning monarch.