Omran Daqneesh, the face of global neglect in Syria 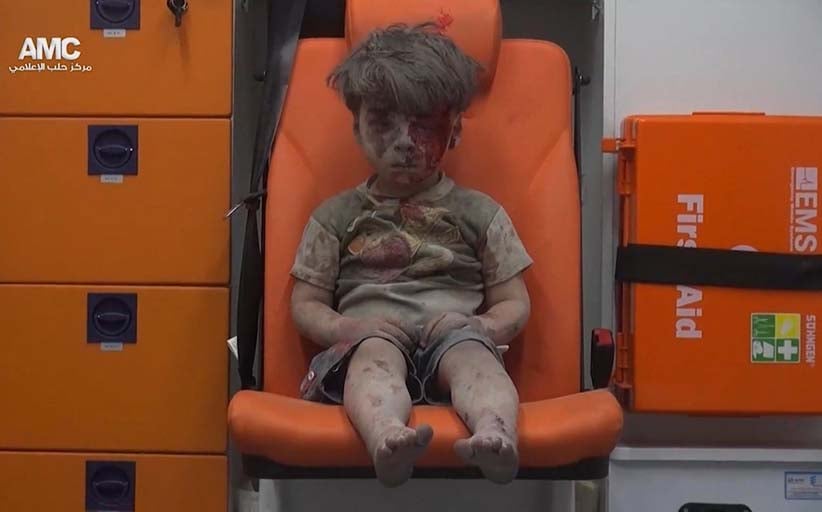 In this frame grab taken from video provided by the Syrian anti-government activist group Aleppo Media Center (AMC), a child sits in an ambulance after being pulled out or a building hit by an airstirke, in Aleppo, Syria, Wednesday, Aug. 17, 2016. (Aleppo Media Center/AP)

The last time around it was the photograph of a little Syrian refugee boy, Alan Kurdi, dead on a Turkish beach. Another year of the Syrian catastrophe has passed and we are all outraged again. This time it’s the gone-viral photograph of five-year-old Omran Daqneesh, pulled from the rubble of his bombed-out home in Aleppo. The mop-haired cherub, bloodied and dazed, sits in an ambulance, his little broken face a metaphor for the collapse of humanity in a ceaseless Middle Eastern carnage we’d otherwise rather not even think about.

You have to hand it to Syrian tyrant Bashar al-Assad’s role model, Josef Stalin. The Soviet uber-despot was onto something when he told a meeting of senior commissars, as reported in the Washington Post in 1947: “If only one man dies of hunger, that is a tragedy. If millions die, that’s only statistics.”

The world’s outrage over the tragedy of Kurdi’s death was, at the time, at least manageable. We could allow ourselves to be persuaded that it was a tragedy about refugees. Angela Merkel pledged to open Europe’s doors, and nearly a million migrants found a home in Germany by the end of the year. When it turned out that Kurdi’s family had been trying to find a way to Canada, the outpouring of Canadian empathy threw a spanner into the works of the federal election campaign. With the election of the Liberals, Canada had taken in 25,000 homeless Syrians by the end of February this year.

In the case of little Omran, though, the world’s conscience cannot be so readily soothed, because that would require a degree of empathy and resolve that the NATO countries have proven incapable of mustering. The United States is NATO’s leading military power, and President Barack Obama has required NATO to align behind a doctrine that has amounted to the most disastrous American foreign-policy debacle since Vietnam. It’s too late to change any of that. It is “only statistics” that tell the full story.

In the three years since Obama invited Russia to help him renege on his “red line” on the use of chemical weapons in Syria, the Syrian Network for Human Rights has documented 136 occasions in which the Assad regime has deployed poison gas in its war on the Syrian people.

We’ve allowed ourselves to be persuaded that the big problem in Syria is the threat posed by Islamic State. The number of Syrians slaughtered by them in three years: 2,686. The number of civilians slaughtered by Russian bombers since the Kremlin scrambled its air force to protect Assad only 11 months ago: 2,704. The number of times Russian warplanes showered civilian districts with internationally outlawed cluster bombs in June and July this year: 47.

Last October, Russia’s UN ambassador insisted that the Assad regime had stopped bombarding civilian neighbourhoods with “barrel bombs” — metal containers filled with explosives, a napalm-like chemical and shrapnel that will destroy everything within a 250-m radius. The number of barrel bombs the Assad regime has dropped since then, counted by the Syrian Network for Human Rights: 10,987. On Feb. 10, Assad told the BBC: “There are no barrel bombs.” The number of barrel bombs dropped on civilian areas during the month of July alone: 1,183.

The number of Syrian civilians killed since Assad decided to turn his country into a slaughterhouse rather than cede to the demands of the non-violent democratic uprising that began in 2011: nobody knows. In April, the UN special envoy for Syria reckoned a death toll of 400,000 (the UN stopped counting in 2014), which matches the directly killed February body count prepared by the Syrian Center for Policy Research. A further 70,000 deaths since 2011 are attributable to the collapse of Syria’s medical infrastructure, the spread of disease and starvation.

Roughly nine of every 10 Syrian war dead since 2011 are on the butcher’s bill accumulated by Assad and his friends in Iran’s Quds Force, the Iran-allied Hezbollah and the Russian air force. The Syrian civilian deaths enumerated during the aerial bombardment of Aleppo, Idlib, suburban Damascus and Hama in the week that little Omran was photographed in that ambulance chair: 508. The number of children among the dead: 96. Among them was Omran’s 10-year-old brother, Ali. It is still not clear whether the bomb that demolished their home was dropped by one of Vladimir Putin’s bombers or Assad’s.

There is always hope, of course. History is full of unforeseen twists and reversals. There may be another Alan Kurdi, another Omran Daqneesh, some little boy who will strike a particularly poignant pose while writhing in agony in the rubble of an Aleppo backstreet, and the conscience of the world will at last be roused to bring the Syrian genocide to an end. Or perhaps it will be some dismembered little girl, breathing her last breath in some endearingly photogenic way.

That should tell you something, to be reduced to hoping for something like that.