In a city already saddled with ill-conceived artwork, officials plan to remove a $20,000 installation from an underpass 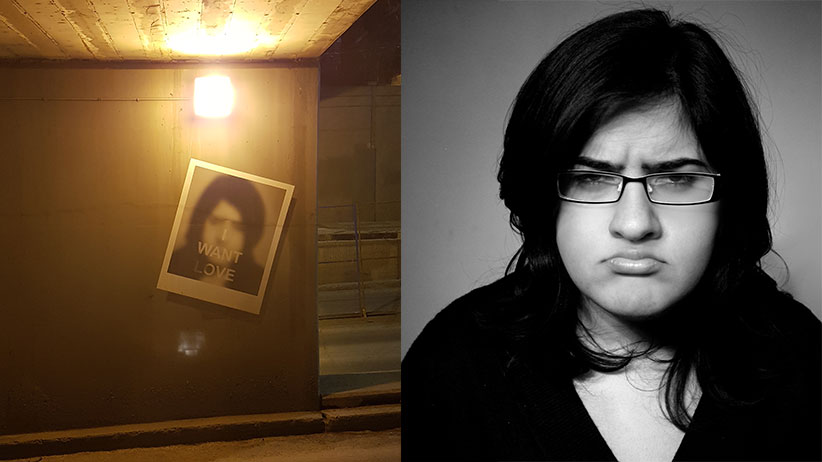 Left: The offending shot of Bisha Ali in a Calgary underpass; Right: the original shot by Jayde Adams.

For the past two years, a gauzy six-foot image of U.K. comedian Bisha Ali has been staring out at Calgary pedestrians and cars, telling them all: “I want love.” Ali has never been to Calgary, but in 2006 went to Vancouver for a science camp as a teenager. A fellow campmate recently got in touch, informing her that her head shot—blown up and intentionally blurred—was in a public art installation in a downtown underpass.

Surprised and curious, Ali began researching this installation by Derek Michael Besant, a long-established Calgary artist and former art college faculty member. One of the portrait subjects, she thought, looked like fellow comedian Sofie Hagen. Another—that’s Chris Betts. And blurry in the turban, that must be Hardeep Singh Kohli, a broadcaster and National Theatre of Scotland board member.

Her sleuthing well past midnight also revealed that Besant had publicly claimed he’d photographed and interviewed 20 random passersby in the underpass for his $20,000 public art commission—“ a real cross-section of the city,” he told Avenue Calgary. It turns out the photos were all lifted from the 2015 Edinburgh Fringe Festival program, to the shock of the subjects and photographers themselves.

“Listen, I’d love to be part of an art installation in Calgary. But I want to give consent first,” says Hagen, who happened to win the Best Newcomer Award at Edinburgh that year. “And I definitely want myself and my photographer Karla Gowlett credited. I feel sort of bemused and I am so curious to know what on Earth Besant was thinking.” (Upon close inspection, it appears the Calgary artist used a mirror image of her photo, and others seem to have been slightly altered in the same manner.)

Besant was also in the Scottish city that summer, doing another of his many public photographic installations at the Edinburgh Art Festival—this one of local printmakers with images blurred and text scrawled over their faces. A few months later, in October, his project for the city of Calgary was complete: six-by-seven-foot mock Polaroids against underpass support walls with large block-letter messages over the alleged Calgarians’ faces.

“Edinburgh Fringe Festival is such a wonderful month full of artists that I am so glad we were collectively such an inspiration to him, even if it unfortunately clouded his ability to complete the assignment adequately,” Gowlett tells Maclean’s in an email.

For comedians and visual artists alike, $20,000 is a lot of money. Ali and other performers in the world’s original and best-known fringe theatre festival are used to having massive head shots in public places—those guidebook shots are blown up throughout the city during the event. “So much money, time, effort design goes into the taking of those photographs, and they become… iconic,” Ali says. “It’s audacious, what he’s done. It’s the basic code of any kind of creative work, or any work in fact, not to be plagiarizing your peers.” Jayde Adams, who took Ali’s photograph for the 2015 festival guide, was similarly surprised, and has reached out to both Besant and a lawyer. 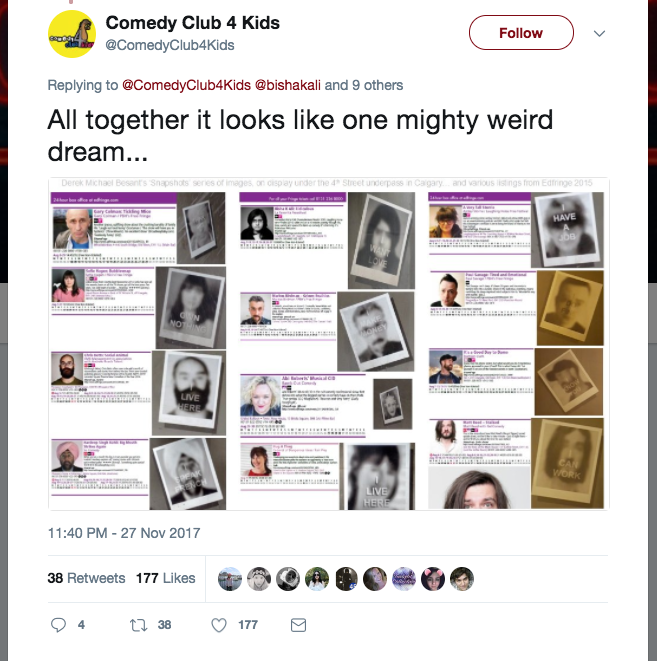 Besant did not reply to multiple requests for comment, but did reply to an investigation that Calgary Mayor Naheed Nenshi requested in response to the outcry. In a statement, head of community services Kurt Hanson said the artist advised officials to remove the installation, and that the city was considering its “next steps.” (As of midday Tuesday, the blurred British performers were still staring out at underpass pedestrians.)

Besant is no rookie. Born in Calgary in 1950, he’s won international awards, and headed the drawing department at the Alberta College of Art and Design from 1977 to 1993, according to his biography. Many of his works, including previous public art commissions for the city of Calgary, have involved photography. (One, 2010’s I Am the River, featured recognizable Calgarians submerged in water.)

Like many cities, Calgary has a policy of setting aside one per cent of infrastructure budgets for public art pieces, but its projects have a remarkable tendency to make headlines for all the wrong reasons. The policy’s mathematical logic requires six-figure public art to adorn multimillion-dollar road projects, but because they’re along major highways, the artists are instructed to design projects that, while attractive and compelling, are not too distracting, lest they cause vehicle crashes. A $470,000 giant blue ring near a 2013 road extension—”awful,” Nenshi said—and a recent $500,000 series of towering steel beams propping up large rock sheets at a new Trans-Canada Highway interchange may not be everybody’s idea of the sublime or of a worthwhile expenditure. Further indignity shone on the city’s public art program in 2014, when officials had to remove a split-globe sculpture for repairs when sunlight bounced off its concave interior and singed a spectator’s coat. City councillors have repeatedly ordered reviews of the program.

I AM AVOIDING WRITING! pic.twitter.com/MxpRbEuAls

For his 2015 temporary project at a downtown underpass scheduled for a major modernization, Besant told Metro Calgary he had spent time in the underpass, observing panhandlers, commuters and “young tattooed guys bopping along.” He interviewed and photographed them, and paired images with quotes like “I want love” or “I walk to work.” Besant has said the quotes and pictures were intended to convey a cross-section of downtown pedestrians. But “this could be any city, anywhere,” his artist statement on the city of Calgary website reads.

Nenshi has told reporters the city is investigating the underpass project and the accusations from across the Atlantic.

Besant’s 2015 work in Edinburgh was meant to offer a glimpse into life in that city, he told Studio International. Using blurred faces of strangers has been a motif in his work for years, and he recalled a 2000 installation in Buenos Aires. “People who came to the opening started telling me whole stories about people they thought they recognized from the portraits who were complete strangers to them. The works are triggering devices … of recognition.”

In Ali’s case, the shock of recognizing herself in Besant’s work summoned a new memory from the 2015 Edinburgh Fringe. Due to a mix-up, she lost her venue that year and never did perform. “Not only did I not get to do a show,” she says, “but my photograph was hijacked and taken over to Calgary.” 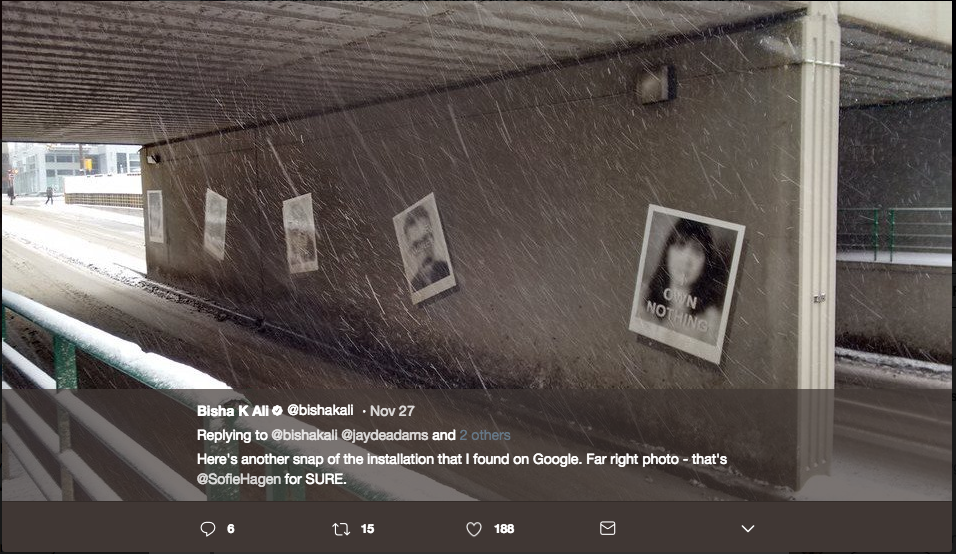 The comedians whose images were used began alerting each other (Twitter)