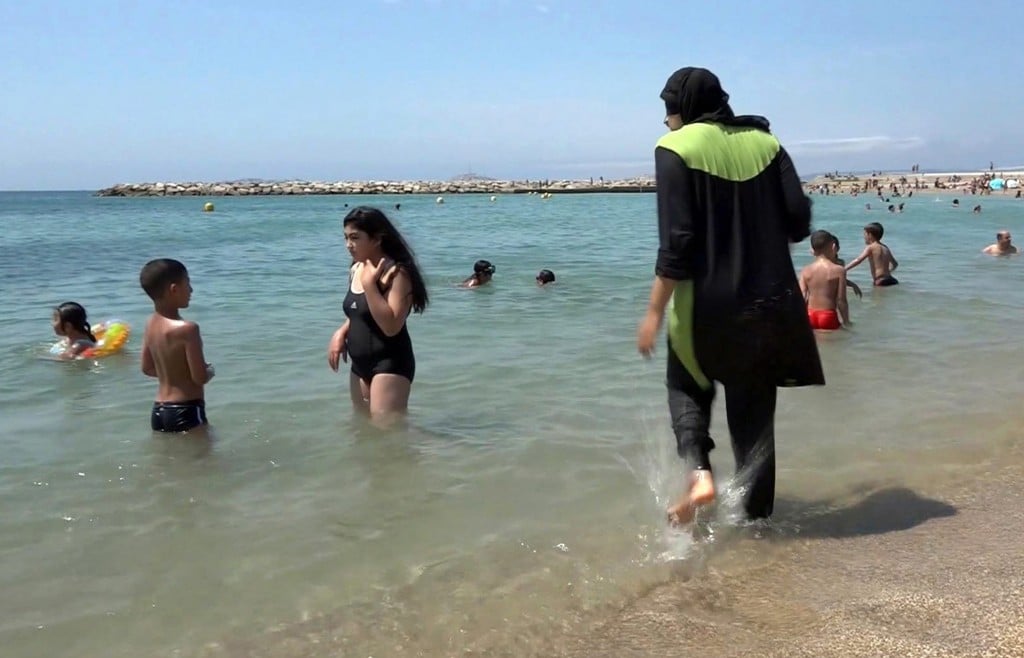 In this Aug. 4 2016 file photo made from video, Nissrine Samali, 20, gets into the sea wearing a burkini, a wetsuit-like garment that also covers the head, in Marseille, southern France. (AP Photo, File)

Beneath the clash over how to dress, or undress, on the beaches of France simmers an issue that for decades has divided the nation, and grown more complex in this time of terrorism.

At least a dozen towns have banned body-covering burkini swimwear favoured by some Muslim women, the latest skirmish in a long-running duel between some members of France’s large Muslim population and the secular establishment.

The burkini will finish in the closet at summer’s end, but the refuelled debate over the French principle of “laicite,” or secularism, is unlikely to go away. And Muslims who feel they lost ground over an issue as shifting as the sand aren’t likely to forget.

The July 14 truck attack in Nice that killed 86 and the July 26 murder of a priest saying Mass in northwest France appear to have lowered the bar of fear, and tolerance.

A 22-year-old French Muslim woman living in Marseille was accosted while shopping in a grocery store with her mother by several people who had seen her on a TV news show explaining why she wears a burkini to the beach.

“’You aren’t at home here. Go home. This is fundamentalism,”’ she said the group told her, recounting the event to The Associated Press, which chose not to identify her by name for her own protection.

The incident reflects just how threatening the subject of head-to-toe swimwear has become, and stoked the debate on secularism – still volatile more than a century after the 1905 law on separation of church and state that established it as a principle of the French Republic.

Then, it was enacted to bring peace to tumultuous relations with the Roman Catholic clergy. Today, enshrined in the constitution, secularism is still being defined, debated and clarified by politicians and experts. An Observatory of Secularism, attached to the prime minister, was created in 2007 and discerns an annual prize.

Some Muslims and non-Muslims alike maintain that the purpose of secularism is being thwarted and the principle transformed into an instrument to regulate the behaviour of Muslims.

“Islamophobia is a new way to say I’m a patriot and that’s the way I’ll defend my country against you people who cannot integrate,” said Rim-Sarah Alouane, an expert on Muslim issues at the University of Toulouse. Politicians, she said, “are actually making sure the population does not integrate. They are making Muslims feel like that they cannot be French.”

With an estimated 5 million Muslims, France has the largest such population in Western Europe and is increasingly in search of ways to reign in traditions that clash with French culture and root out extremism.

France also has an unusually high number of atheists, which is another reason why secularism is a major issue.

The beach bans push the legal envelope on two national laws that amount to dress codes – no headscarves in classrooms and no face-covering veils in streets, passed in 2004 and 2010, respectively.

In neighbouring Belgium, a law banning face-covering veils went into force in 2011. There is a push by some conservative politicians in Germany to ban face-covering veils in German public schools, courts and while driving, but Interior Minister Thomas de Maiziere said it’s not a security issue.

France, steeped in its religious disputes with Catholics, its colonial past in Muslim North Africa and the secularist tradition that wrung peace from violence puts weight on Muslim garb that critics say is excessive.

Some point with concern to a statement by the man expected to head a foundation to better control foreign influence on French Muslims, former minister Jean-Pierre Chevenement, who counselled in a recent interview with Le Parisien daily for “discretion (for Muslims) in public spaces in these difficult times.”

The burkini bans cite as reasons the observance of secularism, risks to public order and, sometimes directly, security, underscoring how sensibilities have quickened with France in a state of emergency living under what Interior Minister Bernard Cazeneuve has said is an “extremely high” terror threat.

Prime Minister Manuel Valls, backing the bans, said that burkinis are a sign of danger.

“The burkini isn’t a new line of bathing suit, a style,” Valls said in an interview last week with La Provence newspaper serving the cities of southern France. “It’s the translation of a political project, counter-society, notably founded on the servitude of the woman.”

The intransigence of Valls – who has said he would like to see a law banning headscarves in university classrooms – reflects worries by some that Islam is slowing gnawing at the fabric of French society, a theme once monopolized by the far-right National Front.

A swim day reserved for women at a private pool was cancelled before the beach bans by the southern town of Pennes-Mirabeau because those to attend could don burkinis if they wished. Now, a driving school opening in the Beaujolais region, with a separate room for women to learn the driving code, is causing a local ruckus.

“The scale of the disaster” is much larger than the burkini issue, said Leyla Dakhli, an Arab history professor studying Muslim women’s issues.

“We are seeing an accumulation” of diktats to regulate the behaviour of Muslims. “They don’t need to isolate themselves,” she said, because this deprives women in traditional garb of opportunities to integrate.

“There is an anguish that is developing and that is crystalizing … We need to have leaders who can calm things,” she said.

A “Little Handbook for a Calm Laicite” was being published this week for use, the subtitle reads, by “teachers, students and their parents.”

The handbook, whose main author is leading secularism expert Jean Bauberot, is needed, because secularism has gone astray, said one of four teachers contributing.

“We see a complete turnaround of secularism from 1905 to 2004,” when the law banning headscarves and other ostentatious religions symbols from classrooms was passed, said Paul Guillibert, who worked for years as a philosophy teacher in a working-class Paris suburb with a high Muslim population.

The law was conceived to guarantee freedom of conscience and religion, a “secularism of compromise” that does not discriminate between citizens, Guillibert said.

“They have changed the definition” into one that makes public spaces “neutral,” he said. And “it’s rather clear there is (now) a form of Islamophobic instrumentalization of secularism.”

He noted the national focus on students who refused to honour a minute of silence following the January 2015 newsroom massacre at the satirical French newspaper Charlie Hebdo – about 200 instances with 40 reported to police, the media said at the time.

Dialogue rather than sanctions can help resolve such problems, Guillibert said.

“But we have transformed secularism into an instrument of combat,” he said.

Angela Charlton and Nadine Achoui-Lesage contributed to this report.