Cameron: Britain's referendum on EU membership to be June 23 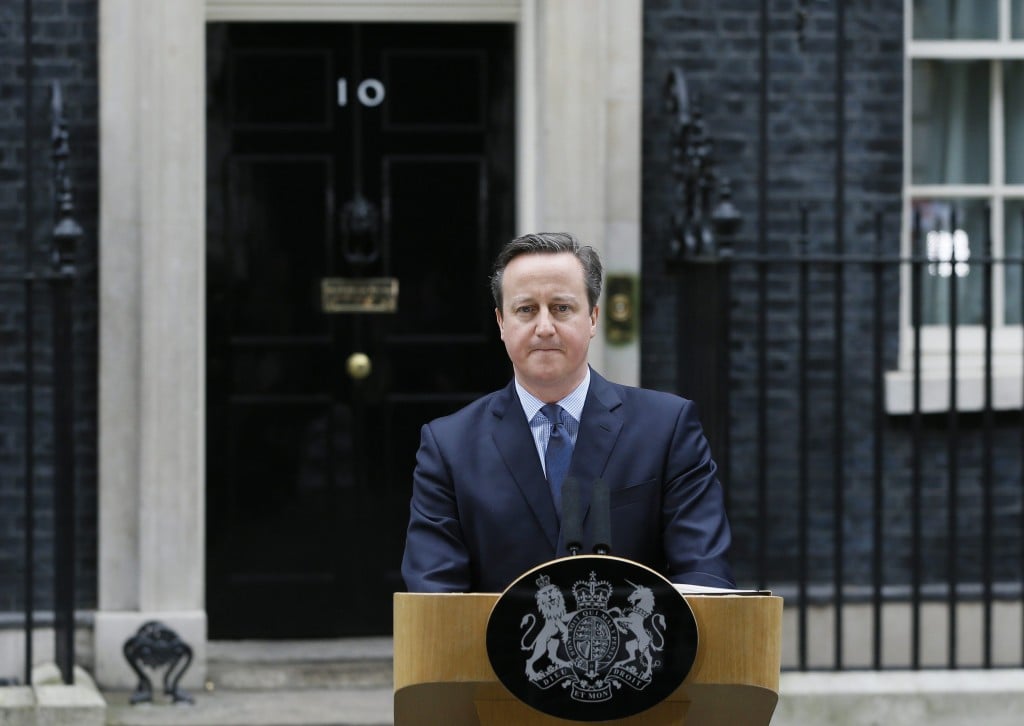 Britain’s Prime Minister David Cameron delivers a statement in Downing Street in London, Saturday, Feb. 20, 2016. Cameron said Saturday a historic referendum on whether to stay in the European Union will be held on June 23. He spoke in front of 10 Downing Street after winning his Cabinets agreement to recommend that Britain remain part of the 28-nation bloc rather than strike out on its own. (AP Photo/Kirsty Wigglesworth)

LONDON – A historic referendum on whether Britain should stay in the European Union will be held on June 23, Prime Minister David Cameron announced Saturday, even as he declared his belief that the U.K. would be “safer and stronger” if it remained in the 28-nation bloc.

Cameron spoke in front of his 10 Downing Street office after holding a rare Saturday Cabinet meeting and winning its agreement to recommend that Britain remain part of the EU rather than strike out on its own.

Despite that support, some Cabinet figures are expected to back the “leave” campaign that wants Britain to carve its own path outside of the bureaucracy in Brussels.

Cameron said if Britons decided to remain in the EU, he would seek continued reforms to address their concerns about job losses and benefit payments to EU migrants seeking work in Britain.

“I don’t love Brussels, I love Britain,” he said, emphasizing that Britain can have “the best of both worlds” if it remains in the EU under a reform deal reached Friday night with EU leaders.

Cameron is poised to lead the campaign for the nation to remain in the bloc in what is expected to be a closely fought referendum _ yet still faces skepticism within his own Conservative Party about the merits of retaining Britain’s ties with the EU.

Cameron has suggested that his ministers will be free to reach an independent decision on the prospect of a “Brexit,” as Britain leaving the bloc is called.

Justice Secretary Michael Gove has already indicated that he favours leaving the EU _ a position Cameron called “disappointing.” London Mayor Boris Johnson, an influential figure in the Conservative party, has so far kept his intentions to himself.

Home Secretary Theresa May, like Johnson seen as a possible future leader, indicated she will back the deal and support Cameron’s position, as has Treasury chief George Osborne.

The deal agreed by EU leaders protects Britain from taking part in an “ever closer union” with European nations and makes clear that Britain will not adopt the euro currency shared by 19 EU nations. Cameron says it also protects British interests and restricts welfare payments to migrants from other EU nations.