Canada is about to surpass the U.S. in first doses of the COVID vaccine

Vaxx Populi: Canada now has strong supply and demand of vaccine doses and is vaccinating 0.88 per cent of the population daily 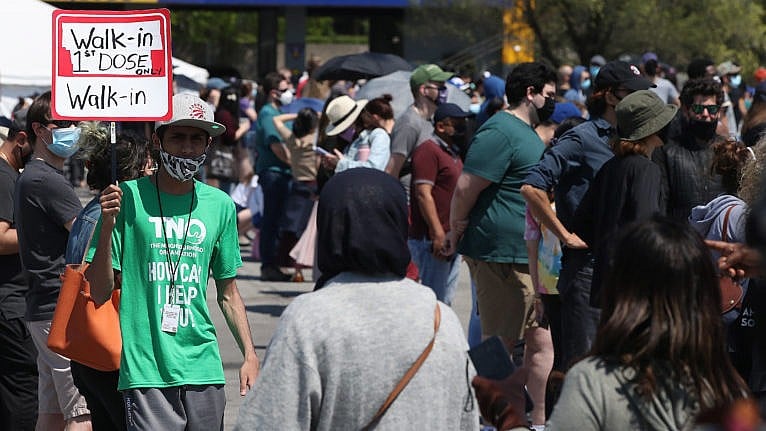 Toronto, ON- May 16 - Hundreds line up in the parking lot of the East York Town Centre for a COVID-19 vaccination clinic. The clinic was opened to anyone from any area code attracting a huge turn out. Ontario tightens restrictions to slow the spread of the COVID-19 pandemic in Toronto. May 16, 2021. (Steve Russell/Toronto Star via Getty Images)

Ten thousand shots was the hope. The result was 10,470. That’s how many doses of COVID-19 vaccine were administered at an immunization clinic at the Thorncliffe Park Community Hub in Toronto on Sunday. Until well after dark, long lines snaked through the parking lot, where people were entertained by DJs before entering the cavernous site. By the end of the day, the clinic, run by more than 50 local community and health care organizations, set a record for the most shots administered at one location on a single day. That record-breaking day in Toronto is a reason why Canada is about to surpass the United States—likely on Thursday—when it comes to the percentage of population with first doses. Right now, Canada has given first doses to 44.7 per cent of its population. In the United States, it’s 47.3 per cent. 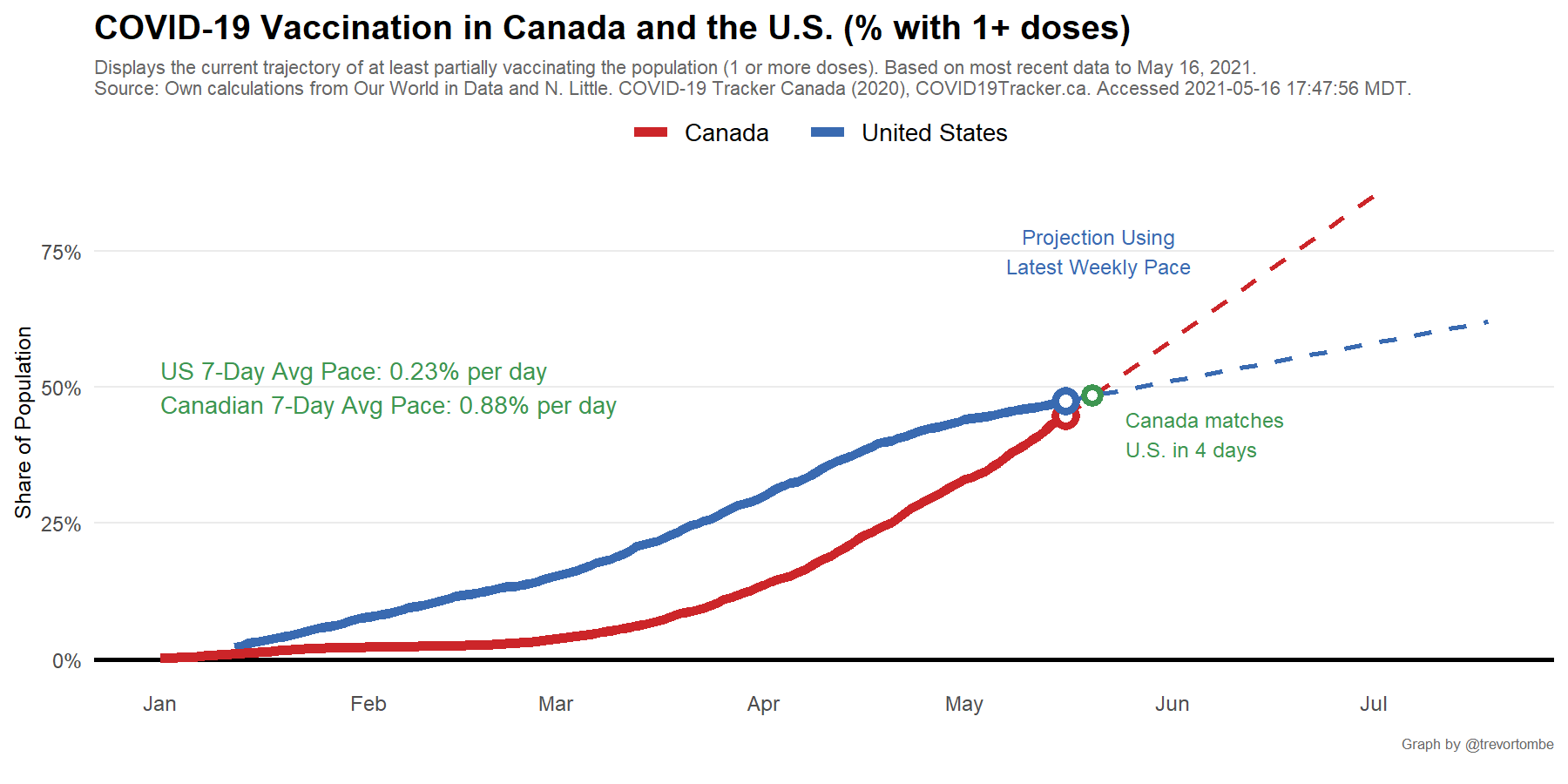 First doses is an important metric, for not only do first doses slow the spread of COVID-19 within communities but they are “a sign of people’s willingness to get vaccinated,” says Trevor Tombe, an associate professor of economics at the University of Calgary who provides daily updates on Canada’s vaccine progress on his Twitter feed as well as his GitHub page. “You can’t get your second shot unless you’ve got your first. And so measuring how many people are willing to get their first shot tells us the state of demand for vaccines in Canada.”

This week alone, Canada will receive 4.5 million doses of Pfizer and Moderna vaccine (Pfizer moved up next week’s delivery because of the Victoria Day long weekend). And that has allowed provinces to open the vaccine appointment spigot even wider: As of May 18, everyone aged 18 and older in Ontario can book a time to get their shot on the provincial system.

RELATED: Ontario has paused AstraZeneca. So, can I get my second dose sooner?

This ramp-up in Canada’s vaccine rollout has been a long time coming. On March 1, vaccine deliveries were so small that Canada wasn’t on pace to reach 75 per cent of its population having first doses until Nov. 24, 2022. Then, vaccine supply accelerated in April and May. Now, at our current pace, Tombe’s model suggests that Canada should reach 75 per cent by June 19. In addition, 75 per cent of all eligible Canadians 12 and up could have second doses by the second week in August.

Any comparison with the United States interests Canadians. On April 9, when Canada’s per capita rate of new cases surpassed that of the United States for the first time, there were rumblings about what went wrong—Canada’s third wave was intensifying while the United States was seeing a long-term drop in cases as its vaccination effort was yielding results. While Canada’s rate of new cases has improved from the 205 per million population on April 9, the U.S. has dropped even faster. As of May 16, Canada posted a seven-day average of 160 per million while the U.S. is at 100.

But the United States is struggling with the concerning issue of vaccine hesitancy. A late-April poll showed that around a quarter of adults in the U.S. don’t want to get a shot. In Canada, only nine per cent say they won’t get the vaccine compared to 88 per cent who either will or have received a dose, according to a new Angus Reid poll, which bodes well for Canada achieving herd immunity. 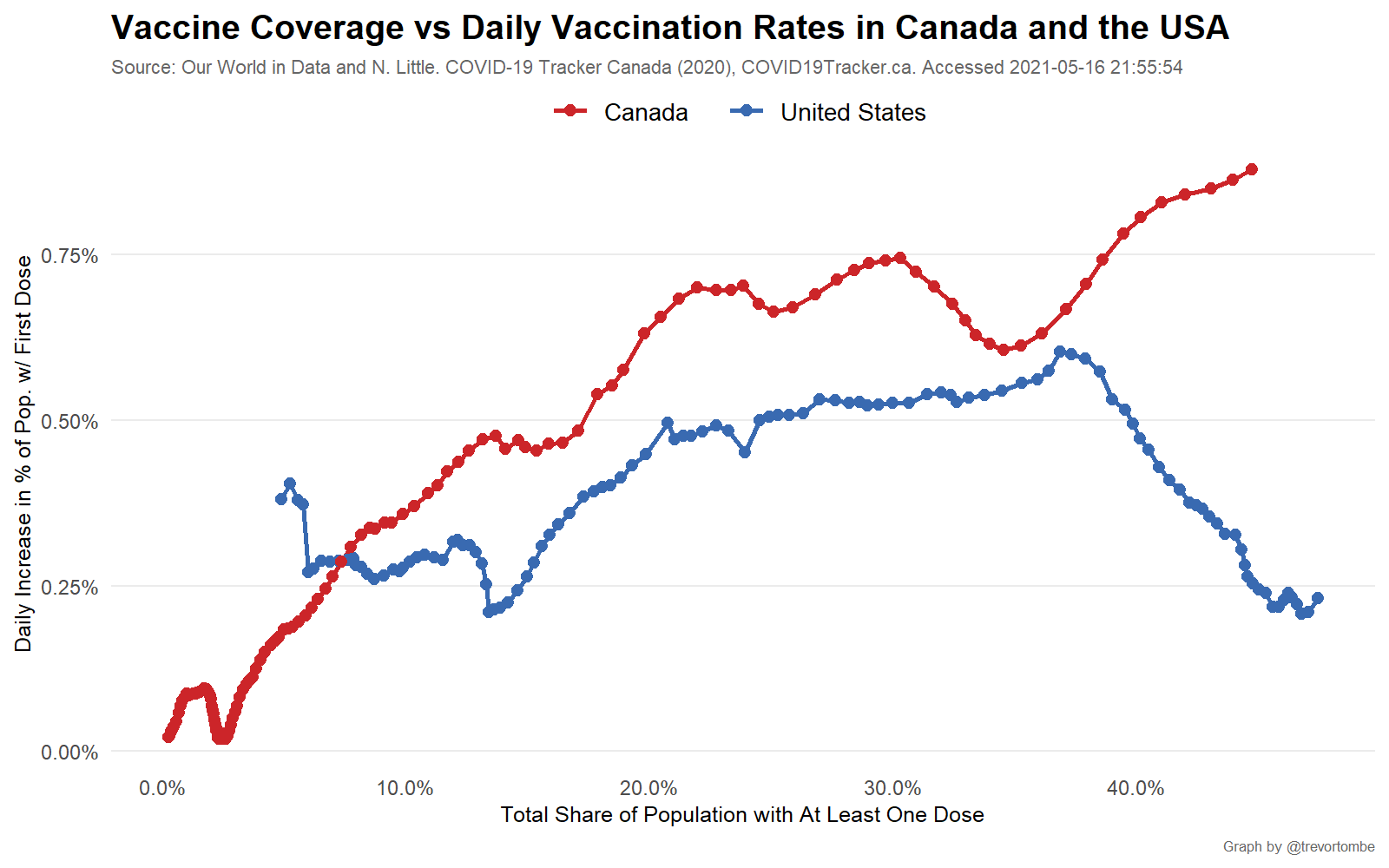 Even though the United States has never had vaccine supply issues, demand has slowed dramatically. Its daily rate of first doses plunged after reaching nearly 40 per cent. So whereas it was once giving first doses to 0.6 per cent of its population daily, that rate is now down to 0.2 per cent, Tombe reports. States are offering inducements to keep vaccination rates from falling further, including weekly US$1-million lotteries and full-ride university scholarships in Ohio. Earlier this month, President Joe Biden set a goal of 70 per cent of adults getting first doses by July 4. Canada could reach that metric a month earlier, Tombe believes.

Canada now has both strong supply and demand. As of May 16, Canada is vaccinating 0.88 per cent of its population daily, more than four times the U.S. rate, on a seven-day average. And it isn’t just the United States that Canada will soon be overtaking in terms of first doses. Tombe projects that we’ll soon pass other nations held up as vaccination models around the world, including Chile within a week, Hungary a few days after that and potentially the United Kingdom within the next two weeks.

There’s no sign of a slowdown yet in Canada, as provinces keep opening eligibility and supplies appear to be steady. Not counting current inventories and future announcements, Canada has enough scheduled deliveries to average 378,000 doses a day, well above its current seven-day rate of 356,904. Eventually, the pace of first dose vaccinations will plateau, as provinces focus their supplies toward second doses, but Tombe doesn’t think it will happen any point soon. Nor, in all likelihood, he believes, will Canada lose its status as the top first-dose nation in North America.