It will be the first aviation authority to apply benchmarks to help improve pilots’ ability to judge how—or even whether—to land. Do they go far enough? 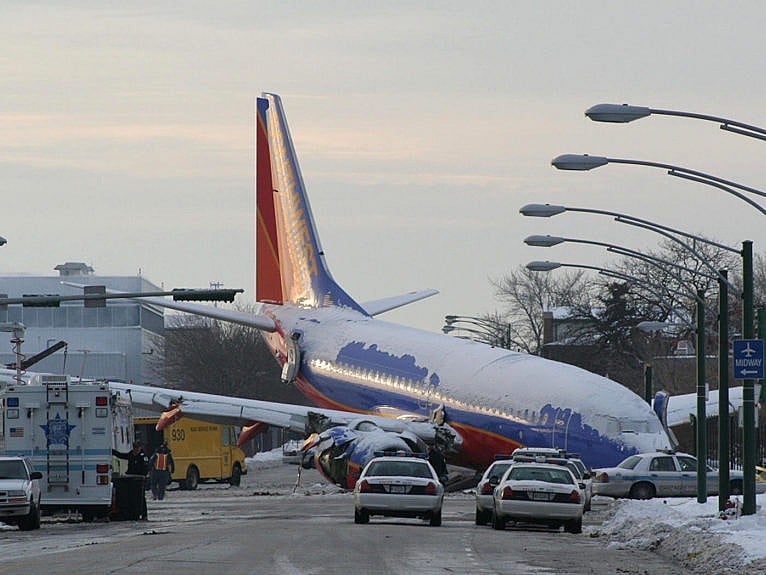 Fifteen years ago, a Southwest Airlines flight landing in snow skidded off the runway at Chicago Midway Airport. It blasted through a perimeter fence, landing atop a car carrying the Woods family.

Six-year-old Joshua was in the back seat. Next to him were his brothers, one-year-old Matthew and four-year-old Jacob. Their mother, Lisa, was in the front passenger seat. Their father, Leroy, had been driving.

“Dad couldn’t open the door, so he crawled out the window and pulled me out,” says Jacob, now a 19-year-old college freshman in Indiana. Leroy freed Matthew as well, but he could not reach Joshua, who died. From the cockpit, Captain Bruce Sutherland could see Woods, holding a baby. Jacob remembers his dad “yelling at the pilot to get the plane off his kid.”

“Everyone’s heart was broken when that young boy was killed,” says John Gadzinski, a pilot at Southwest who participated in the accident investigation.

The crash and the tragic death of Joshua Woods made global headlines, but the problem that led to the accident persists to this day. When landing on snow, ice or slush, pilots have little objective data to tell them how much runway it will take to bring the plane to a halt. “We are flying blind when it comes to understanding the risk we are exposed to when we land on a slippery runway,” says Gadzinski.

Instead, pilots do as they have done for decades: rely on the assessments of the flight crews who touched down immediately before them. And yet, these assessments can be inconsistent.

“The pilots of two identical aircraft landing in the same conditions on the same runway could give different braking action reports,” writes transport pilot Patrick Veillette in a 2020 article for Aviation Week. “The disagreement could be the result of differences between the aircraft weight, pilot technique, experience or expectations.” Runway conditions can change quickly, Veillette adds, creating another level of uncertainty.

Pilot assessments can also be wrong. Investigators discovered the braking conditions recorded on the computers of three planes landing before Southwest Flight 1248 showed the runway was more slippery than the Southwest pilots assessed it to be. Had the pilots known the true conditions of the surface, they might have opted to divert to a different airport.

Runway “excursions,” as they are known, occur far more often than most people imagine. In February 2020, a Pegasus Airlines 737 skidded off the runway in Istanbul, breaking apart. Three people were killed and 179 injured. Six months later, an Air India Express flight was unable to stop in time and the plane nosed down a 30-foot embankment in Calicut, killing 21 people, including both pilots. In the eight years ending in 2016, the International Civil Aviation Organization noted that around the world, airplanes veered off the runway nearly once a week.

For a number of years, Transport Canada has been working with international counterparts to enhance the accuracy not just of pilot reporting but also how it integrates with other sources of information, like airplane and airport data. And this year, Canada will be the first aviation authority in the world to introduce newly standardized engineering principles that pilots and airlines can use to match their assessments of braking action with the objective data collected by airplane sensors. The result, says Cybelle Morin, a spokesperson for Transport Canada, will be “a more rational set of benchmarks” that will improve pilots’ ability to judge how—or even whether—to land.

The Transport Canada advisory defines four standardized terms that cover the range of braking action that may be required on the runway. “Good” means aggressive braking will be sufficient. “Medium” means the brakes aren’t as effective. When conditions are “poor,” braking and control of the airplane’s lateral direction are minimal. “Nil” means there is no effective braking and pilots can’t be sure whether the plane will skid in any direction. Pilots may well consider diverting to another airport.

Braking action is the most critical data pilots can share with those who will be landing after them. And to be more precise with their reports, pilots need to learn how to distinguish between the many forces slowing the plane—separating the impact of the mechanical wheel brakes from, say, headwinds or reverse engine thrust.

Dan Rose, a former Navy pilot and aviation lawyer in New York who represented a passenger on Southwest Flight 1248, knows first-hand how crucial a pilot braking report can be. He describes seeing a “hypnotizing river of snow” coming across the runway while piloting a private plane into an airport in Virginia. When he radioed for a report, the airline pilot who had just landed told him, “It’s a varsity day”—meaning, Rose explained, not for amateurs. “It wasn’t standardized terminology, but I got the point.”

In theory, Aaron Speer, a pilot and vice-president of operations for Canadian North, likes the new standards. His airline frequently operates from runways affected by ice and snow. But Speer worries that getting pilots to isolate the actions of the brakes from everything else may be hard to implement. “I touch down on a runway that’s slippery and I slow the airplane down,” Speer said. “How much of [that] can I attribute to the brakes?” he asks. Even with his highly attuned “keister,” as he calls it, Speer says he “can’t differentiate between what is thrust reverser, what is loss of inertia and what is lots of deep snow.”

Veillette also has reservations: “I’m not certain that a pilot is going to have the mental reserve to make an astute, engineering-type of data analysis during a high-speed, high-threat, hazardous phase of landing.”

But Gadzinski, who worked with the Canadians on an international task force to create the standards Canada has endorsed, says pilots already compute these factors in their heads. They need only be taught to observe and analyze data the way the engineers do. “It’s the secret sauce,” he says.

Armed with terms that link a pilot’s measurements with airplane data, “the accuracy of pilots’ reports on the friction level of a runway are greatly improved,” says Transport Canada’s Morin.

This is key to eliminating the uncertainties that make landings in snow and slush so hazardous. “What is braking, and what is the effectiveness of the brakes, and how do you take that from a completely subjective observation to an objective one?” Gadzinski says.

In the advisory to airlines that will be issued shortly, Transport Canada notes that written guidance and pilot training may be required to be sure flight crews are able to isolate the action of the brakes from other deceleration forces. In this way, “reasonable and accurate reporting can be expected from flight crews.”

In a world in which data is so easily shared, the significance of giving pilots standardized words to define and share their landing experiences seems incremental at best. But aviation authorities are already planning a more consequential next step: the transmission of data collected by sensors on the airplane in real time to the next pilots approaching to land.

At the end of December, Jacob Woods returned to Chicago’s Midway Airport and stood outside the fence where his brother died. A photo of Joshua hangs from a street light that still shows the damage where the Woods’ car was pinned between it and the airliner. As he does every year, Woods left flowers at the scene. He says he finds comfort in that.

When I tell him that the accident for which his family paid such a heavy price had prompted change on a global scale, Woods says that is how it should be. “If somebody was in a building and it didn’t have smoke detectors and somebody died, the right thing to do is look at how it happened and get the right things done,” he says.

This article appears in print in the February 2021 issue of Maclean’s magazine with the headline, “Project runway.” Subscribe to the monthly print magazine here.