Call for change comes as the death toll from the illicit overdose crisis involving opioids climbs across the country. 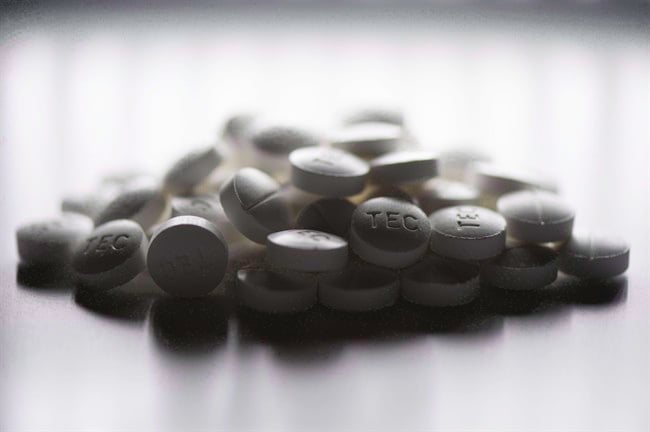 Prescription pills containing oxycodone and acetaminophen are pictured in this June 20, 2012 photo. THE CANADIAN PRESS/Graeme Roy

VANCOUVER – Lynn Cooper wanted to be an urban planner as a university student. But her dream came to an abrupt end with a workplace accident, sentencing her to a life of curtailed ambitions and chronic pain.

Thirty years later, Cooper said it’s hard for anyone who hasn’t experienced long-lasting pain to understand what it’s like.

“Everything about you is impacted by unrelenting and under-managed pain,” said Cooper, president of the Canadian Pain Coalition.

“There’s always the stigma that’s attached to it that you’re a complainer, a drug-seeker or a malingerer, and if you just tried harder and got over yourself you would be fine.”

Cooper is one of a growing number of voices calling on Canada to overhaul its approach to pain management in order to better support alternative treatments that depart from the current over reliance on opioid therapy, which she said is shortsighted and unsafe.

The call for change comes as the death toll from the illicit overdose crisis involving opioids climbs across the country.

The first refers to drugs, the second to physical treatment, such as massage and physiotherapy, and the third includes cognitive behavioural therapy and mindfulness.

While opioids and other pharmacological strategies tend to receive the most financial support, better coverage is needed for the other, non-drug treatments, many of which have evidence-based backing, she said.

“I feel quite strongly that these services should be provided by provincial health-insurance plans … because they work, they’re healthy, they promote resilience and they’re preventative. I don’t see a downside,” said Campbell, who is also the president-elect of the Canadian Pain Society.

“This isn’t necessarily about opioids and prescribing, but about what are the barriers to other alternatives that might help reduce the requirement of opioids.”

Dr. Kim Rutherford, a family physician based in British Columbia, also lamented the lack of funded alternatives to help her patients cope with pain.

“It’s very hard,” Rutherford said. “It can be disheartening to know that they could benefit from a different treatment option that is limited due to lack of finances or lack of extended health coverage.”

Dr. Jane Ballantyne, a professor of anesthesiology and pain medicine at the University of Washington in Seattle, was one of the first physicians to ring the alarm bell about the possible dangers of opioids.

“The main thing is to get the message across that opioids are not good treatment for long-term pain, that they don’t have good long-term outcomes. Full stop,” she said. “They’re not safe.”

Ballantyne began to question the conventional wisdom around opioids in the 2000s while working at Massachusetts General Hospital in Boston.

“I began to observe that people, particularly people taking very high doses of opiates, were in agony,” she said about patients receiving therapy for chronic pain.

Dr. Norman Buckley, head of the Michael D. DeGroote National Pain Centre at McMaster University in Hamilton, said another issue is the relatively low level of training in pain management that doctors receive.

Buckley, Ballantyne and other experts emphasize, however, that opioids remain an important tool for certain situations, such as acute-pain management. They also warn against pulling patients off long-term opioid therapy too suddenly, which risks driving them to black market drugs.

Marc White, head of the Canadian Institute for the Relief of Pain and Disability, pointed to the need for patients to play a greater role in their pain management.

“We’ve become very pain averse, and that becomes problematic in terms of believing that all one needs to do is take a pill,” he said.

He said there needs to be better education about pain and ways of addressing it in daily life.

Ballantyne added that unrealistic expectations of pain medicine are not helpful.

“Throwing treatments, and particularly medications, at pain without some sort of active participation on the part of patients is usually not helpful,” she said.