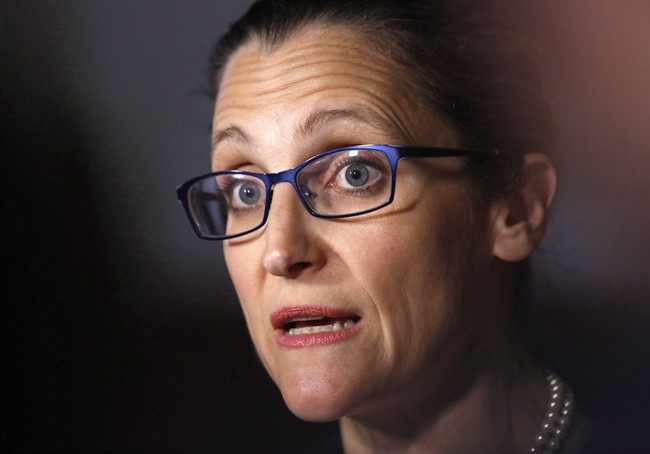 OTTAWA – Canada is urging the Venezuelan government of President Nicolas Maduro to end its campaign of repression and respect the country’s existing political institutions.

Maduro has just pushed through a contested election of a constituent assembly that will rewrite the country’s constitution, a move widely condemned internationally.

The United States has called the vote a sham and Freeland says the existing national assembly is the only legitimately elected representative body in Venezuela.

She says Maduro must accept the assembly’s authority and restore its full powers.

Freeland says Canada is gravely alarmed by the unlawful detention of Lopez and Ledezma.

“Canada calls on the government to respect the democratic rights of Venezuelan citizens and enter into meaningful negotiations to restore constitutional order in Venezuela,” she said in a statement.

In July, the Venezuelan supreme court placed Lopez under house arrest after he had spent three years in prison for his role in anti-government protests in 2014. Ledezma was placed under house arrest in 2015 after being imprisoned on charges of leading an alleged coup against Maduro.

OPINION: Venezuela’s collapse and the ‘useful idiots’ of the Canadian left

Economic troubles and months of political turmoil on the streets have rocked the South American country.

Freeland said she commends the courage of those struggling for their democratic and human rights.

“Canada stands with the brave Venezuelan people as they struggle to preserve the future of their deeply threatened democracy,” she said.