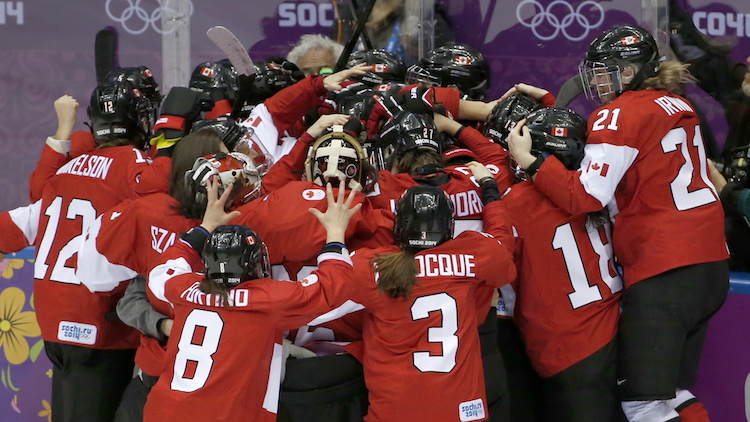 The only other women’s team to win more consecutive Olympic gold is the U.S. in women’s basketball with five in a row from 1996 to 2012.

Marie-Philip Poulin scored the winner on a power play at 8:10 of overtime for her second of the game. She had tied it up with 55 seconds remaining in regulation.

Poulin was a heroine of Canada’s gold in Vancouver four years ago. She scored twice in a 2-0 win over the Americans.

Trailing 1-0 after two periods and down two goals deep into the third, Canada scored twice in the final 3:26 of the regulation and suddenly the gold that had been slipping away was within reach again.

Canada’s Brianne Jenner halved the deficit at 16:34 of the third with a shot that deflected off of U.S. defender Kacey Bellamy’s knee and over goalie Jesse Vetter.

With Shannon Szabados pulled from Canada’s net for an extra attacker, forward Kelli Stack’s attempted empty-netter that would have sealed the gold for the Americans hit the post.

In overtime, Canadian defender Catherine Ward was serving a cross-checking minor and American forward Jocelyne Lamoureux a slashing minor when Canada’s Hayley Wickenheiser took off on a breakaway.

She was hauled down by Hilary Knight and Poulin scored on the ensuing four-on-three.

U.S. captain Meghan Duggan scored in the second period and Alex Carpenter added a power-play goal in the third in front of an announced 10,639 at the Bolshoy Ice Dome.

Duggan beat Szabados with a wrist shot over the Canadian goalie’s glove shoulder at 11:57 of the second. Carpenter deflected a cross-ice pass from Hilary Knight past Szabados’s left pad at 2:01 of the third.

Szabados made 27 saves for the win, while Vetter stopped 28 shots in the loss. Canada edged the Americans 3-2 in the final preliminary-round game for both countries.