Less than a year after Syrian refugee kids began enrolling by the dozen at Ottawa’s Carson Grove Elementary School, Julie Hanna, a Grade 5 teacher there, found herself standing for O Canada with a group of them at an Ottawa Senators game. A local charity had given the school a block of seats for the Sens’ Feb. 9 NHL game against the Dallas Stars at the Canadian Tire Centre. As Hanna scanned the excited faces of her students, she saw that a boy named Abdullah, in particular, was really belting it out. “And I choked up,” she says. “These kids, imagine what their life was two years ago. And now they’re here, singing the anthem from the depths of their being.”

It is, as Hanna’s half-apologetic smile admits when she tells the story, a pretty syrupy slice of contemporary Canadiana. But hang around Carson Grove for a while and opportunities to choke up that way aren’t hard to come by. The little school might be the epicentre of the Syrian refugee saga in Canada—an unusually concentrated case study in the needs of newcomers being met by a community’s resolve to not let them down. Nobody planned it that way. Carson Grove had only about 220 students, from kindergarten to Grade 5, at the start of 2016. And then, over three frenetic months last spring, 110 new Syrian kids poured in.

READ MORE: An oral history of the first flight of Syrian refugees to Canada

Reasonable rent was the magnet. These were not refugees from the privately sponsored stream, who have groups of dedicated volunteers waiting to help them settle. They were mostly so-called government-assisted refugees, and federal officials found inexpensive apartments for several dozen Syrian families in two nondescript Ottawa high-rises, which happen to be in Carson Grove’s catchment area. “Honestly, we were overwhelmed,” says the school’s principal, Irene Cameron. “But we kept on trucking.”

That meant, on a practical level, adding portable classrooms by the fall of 2016 and hiring extra staff. But Carson Grove is admired for more than merely managing numbers. In fact, immigration experts from several groups, and a few foreign governments, including Germany and Sweden, have come calling to see how Cameron and her staff adapted to the influx. They find a school situated in a largely low-income, immigrant-heavy part of Ottawa’s east end. The nearest roadside plaza offers, along with an upscale coffee place, Moroccan-style takeout shawarma and a halal butcher. Even before the Syrians showed up, Carson Grove was filled mainly with children of new Canadians, from countries like Afghanistan, Somalia, Congo and Haiti. 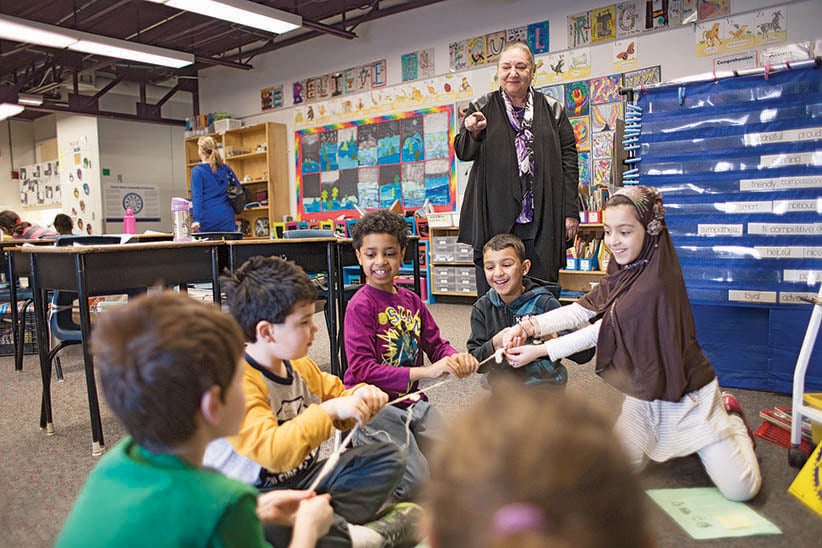 The school building is a 1973-vintage, single-storey, textured-concrete throwback to the “open-concept” era. That means no walls, just dividers and cheerful jumbles marking the boundaries between classes. The exposed steel beams of the ceiling are painted purple. Plenty of the girls wear hijabs, and Mohammed is a common boy’s name. Arabic is in the air, but not quite so much, Hanna notes, as it was last spring. Special language classes, often taught in portables, are a priority, and Syrian kids who arrived last year speaking barely a word of English have made dramatic progress.

Hanna played an important role in helping them settle in. She came to Canada as an infant with her family from Egypt, and grew up in Edmonton and Toronto with her parents speaking Arabic to her. She was a little rusty when the Syrians started arriving, but fluent enough to translate for overwhelmed parents and shy kids. Eighty-three per cent of the 25,000 government-supported Syrian refugees admitted to Canada between Nov. 4, 2015, and March 1, 2016, spoke no English or French, according to federal data. In sharp contrast, just 19 per cent of privately sponsored refugees reported that they didn’t know any of either of Canada’s official languages.

So the language imperative comes up at every turn at Carson Grove. On a recent school day, I visited a special Grade 3 English class being taught in a portable. The enthusiasm of the 11 Syrian kids and one Somali girl was infectious, whether they were singing about riding a sled or showing off their knowledge of the names of animals. “They are so appreciative,” says their teacher, Laura McLeod, who has been at Carson Grove since 1988, staying mainly because she likes teaching immigrant kids. “They want to learn. They want to work.” 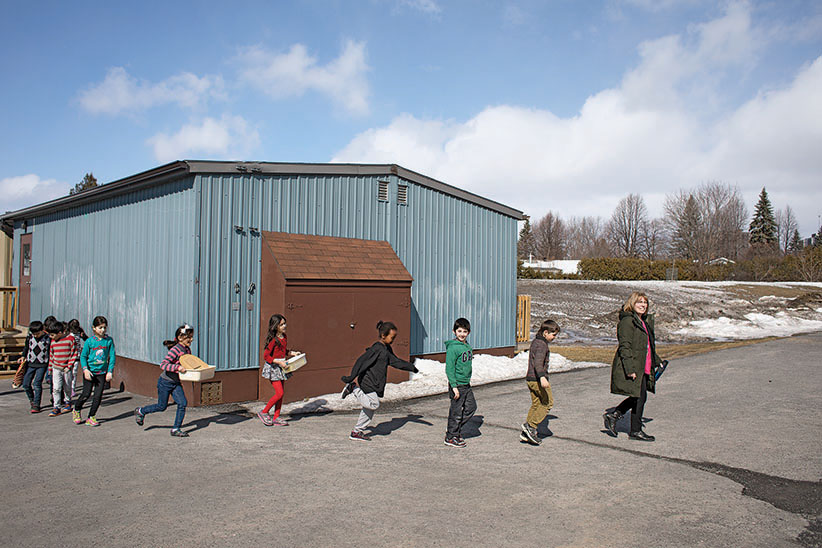 McLeod sets me up to play a board game—designed to teach kids how to say the hours of the clock in English—with Zara and Hala. On my turn to roll, I blow on the dice and say, “Daddy needs a new pair of shoes.” The girls look at me wide-eyed. Before her next roll, Zara blows tentatively into her cupped hands and says, “Zara wants long hair.” No wonder the teachers at Carson Grove, exposed to this sort of thing on a daily basis, speak so intensely about their mission. “I’ve worked in a few other schools,” Hanna says, “and the sense of community here, the sense of compassion, is definitely an anomaly.”

She credits her veteran principal with setting the tone. Cameron strives to take her school out into the community, and vice versa. She holds a meeting with Syrian parents at those high-rise apartments every few weeks, for instance, rather than relying on them coming to Carson Grove. She cajoles companies willing to contribute, partners with immigration service agencies and cultivates Muslim community leaders. (Last fall, several Muslim groups and mosques donated $12,000 to Carson Grove to help with field trips and other special efforts to help the refugees.) Syrian students have been treated to, among other excursions, ski trips, overnight camping and ice-fishing outings.

Leslie Emory, executive director of the Ottawa Community Immigration Services Organization, which helps settle about 10,000 immigrants and refugees per year in the capital, says the outpouring of concern for the high-profile Syrians has been unique. “There was this huge momentum in Ottawa, and other cities, with people wanting to help,” Emory says. Carson Grove handled the pressure and made use of the publicity conspicuously well. “They are small and they have such a dedicated and inspirational principal in Irene,” she says. “I think they approached it in a very human and compassionate way, and that’s what you see when you walk through the halls of that school.”

The mood at the school is so bright, in fact, that it’s easy to forget the darkness the Syrian kids and their parents left behind. They are among the five million who fled their country during its six years of terrible war, according to the United Nations High Commission on Refugees. Indeed, the families with kids at Carson Grove are among the luckiest fraction of that huge migrant population. Even though the UNHCR made a plea more than a year ago at a special meeting in Geneva for the resettlement of 500,000 Syrian refugees, new homes for only about 250,000 had been found by the end of March.

If the refugee numbers can be numbing, their individual stories sting. Alia Hamoud Alheso, 40, left her home in Aleppo with her husband and two young sons during the cruel bombing that reduced large swaths of the northern Syrian city, once the country’s main business and industrial centre, to rubble. They fled first to villages where they had family, but had to keep moving when Islamic State terrorists took over. “I don’t want to remember anything,” Hamoud Alheso says in an interview in Cameron’s office. “I saw everything with my eyes.”

She speaks of extremists imposing their strict dress code on women. “You must cover everything—my hands, my face, everything black, black, black,” she says. Pressure mounted on her husband, an experienced nurse, to work for Islamic State or face the consequences. Far worse, the terrorists beheaded a number of men—Hamoud Alheso estimates as many as 20—in one village where the family had taken sanctuary, and displayed the severed heads to intimidate others.

The family decided to cross into nearby Turkey, where they lived as refugees for about six months before the invitation to immigrate to Canada came. They arrived in Ottawa on Feb. 24, 2016. At first, Hamoud Alheso’s two sons, now nine and 10 years old, didn’t want to go to school. They were worried about not speaking English. Now, they don’t want to miss a moment. Through an immigration agency, her husband has found two days’ work a week at a Costco. It’s a start. Meanwhile, they’re all diligently studying and practising English. Hamoud Alheso says Canadians have been unfailingly kind, and the only anti-Muslim sentiment she’s encountered is on Facebook. “My English teacher said, ‘Ignore them! Don’t look!’ ” she says.

Her sons quickly figured out what it takes to fit it. One day, her nine-year-old, Shiar, piled some cardboard boxes against the living room wall. To his mother’s alarm, he then began firing a puck against them with a hockey stick he’d been given at Carson Grove. “I told him, ‘You can’t play here!’ ” Hamoud Alheso says, laughing. “He said, ‘I want to play!’ He said, ‘Take me to where I can play hockey!’ ”

It’s the sort of moment Emory means when she describes the Syrians’ first few months in Canada as “kind of euphoric.” National myth aside, though, embracing hockey isn’t enough to forge a new life here. The reality is that after one year, federal assistance ended for the refugees. At “month 13,” as it has come to be called, most had to apply for provincial social assistance. Few, understandably, had found work that paid well enough to support them. “I think we need to be realistic,” Emory says. “This whole month 13 thing is a bit of a farce, in the sense that their settlement process is perhaps five years to get to really be proficient in the way that they need to be to be successful here.”

Every so often, even Cameron lets a worried word slip. She frets about some Syrian families that have already moved away from the Carson Grove neighbourhood for better housing or job opportunities, wishing they would stay close long enough for their kids to get in a few years at the school. For the most part, though, she is resolutely optimistic. In her cluttered office, she spins stories of Syrian families trying ice fishing, shows a video of their kids learning to ski at Mont-Tremblant in Quebec, and talks up the spread she expects parents will put on at an upcoming potluck supper.

Asked about her own background, Cameron at first deflects questions. But when pressed, she explains that both sides of her Ukrainian family were refugees at the end of the Second World War. They found a home in Canada. She’s well aware that an old Canadian drama is being played out, albeit with a new cast, on her watch. What’s special about Carson Grove’s part in the story? She says a group making a training video for front-line refugee workers in Britain recently asked her to sum it up on camera. Cameron wasn’t sure what to tell them. “It’s hard to package it; we do what we do,” she says. “I think it’s a combination of patience, flexibility and empathy. That’s the bottom. I mean, that’s what you need.”