Ghost stories are a worldwide phenomenon, and Canada has its share. Here are 10 of our best-known tales of hauntings, poltergeists and ghostly villains: 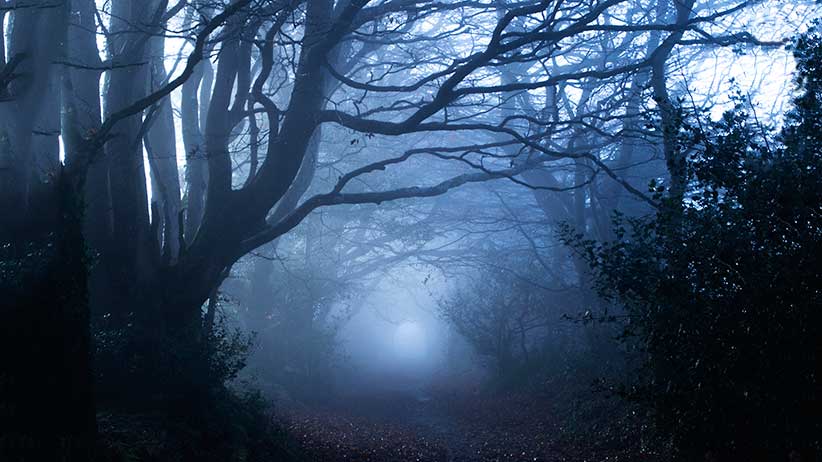 1. The Mackenzie River ghost is one of the oldest tales of haunting in Canada, dating back to the 1850s, and was once widely known in Europe. Augustus Richard Peers, a fur trader and Hudson’s Bay post manager, died at 33 at Fort McPherson, in the Northwest Territories’ extreme north. When his frozen body was transported to Fort Simpson for permanent burial, a ghostly voice could be heard ordering the party on—Marche!, the voice said: Walk!—driving the sled dogs mad.

2. The Baldoon mystery received a great deal of interest when it emerged in the late 1820s in the vacant Baldoon sheep-farming settlement between Wallaceburg and Chatham, in southwestern Ontario. A classic poltergeist haunting, the phenomena included bullets, stones and lead pellets raining down upon a farmer’s home, as well as fire from the sky. Brickbats smashed windows as if of their own accord; a baby in its cradle was rocked madly by an unseen hand. Chairs slid across floors. These events ceased after the home burned down in 1831.

3. The story of the Wynyard apparition dates back to 1785, when British Army Lt. George Wynyard and Capt. John C. Sherbrooke, the future governor general of British North America, sat in Wynyard’s rooms in Sydney, N.S., conversing by the fire. When the figure of a tall young man appeared by a closed doorway, Wynyard’s face turned ashen. The youth looked at him, then floated by the fire and through a door. It was Wynyard’s favourite brother, in England at the time. Wynyard later learned he had died, at 20, at the very moment he’d appeared in Sydney.

4. The great Amherst mystery, from the late 1870s, describes events in a cottage that once stood in Amherst, N.S., at the corner of Princess and Church, where the young Esther Cox, sickly and broken-hearted, was tormented by a poltergeist. Her arms and legs would balloon to enormous sizes and bedsheets flew through the air. On her bedroom wall one night appeared the words: “Esther Cox, you are mine to kill.” The disturbances eventually petered out, and Cox went on to marry and move to New England.

5. The Binstead haunting, another late-19th-century ghost story, took place just outside of Charlottetown, in a house that rumbled and in which shrieks and moans could be heard. At the end of each episode, these voices would begin to emanate from beneath a tree outside the dining room window whose branches touched the upstairs bedroom, the focal point of the phenomena. Those who saw the ghost described a woman with a baby in her arms.

6. The ghost of Tom Thomson, the artist and hero to the Group of Seven painters who died under mysterious circumstances in 1917 paddling in Algonquin Park’s Canoe Lake, is said to appear some mornings shimmering on those same waters in a grey canoe.

7. William Lyon Mackenzie King, prime minister of Canada between 1935 and 1948, long hid his spiritualist pursuits, which he believed permitted him to maintain relationships with dead friends and even his mother. But after his own death, Mackenzie King’s friend Percy Philip, the Ottawa correspondent for the New York Times, told the CBC he had travelled to Mackenzie King’s estate outside Ottawa, called Moorside, in Gatineau Park, where he carried on a long conversation with the prime minister’s ghost. “Be still and listen and feel,” Mackenzie King had once written about making contact with spirits, and this Philip did: “Good evening, Mr. King,” he said aloud after feeling a presence sit beside him. And their discussion ensued.

8. Windigo is a spirit central to the Algonquin belief system that is said to possess individuals, causing them to lust after human flesh. Although widespread, stories of Windigo are particularly associated with northwest Ontario, where in 1907, at a settlement just north of the town of Red Lake, police arrested brothers Jack and Joseph Fiddler for the murder of Wahsakapeequay, Joseph’s daughter-in-law, who they said had turned into a Windigo. Jack, who later committed suicide, admitted to killing 14 such Windigos during his life. Convicted, Joseph died in jail two years later.

9. The Dagg poltergeist took place in Portage-du-Fort, Que., west of Shawville on the Ottawa River, around the home and farm of George Dagg. The disturbances centred around Dinah, a Scottish orphan who had joined the Dagg family, and began in September 1889 with a series of fires erupting spontaneously around the home. Soon, stones were thrown through windows by unseen hands, and household objects—milk jugs, a butter tub, a wash basin—floated through the air. Dinah was heard conversing with a deep, disembodied voice, who answered her questions. The haunting inexplicably ceased after three months.

10. For centuries, Newfoundlanders have blamed a class of sleep disturbance on the Old Hag, a ghostly figure who descends on her victims as they sleep, lies on their chests and causes a nightmarish sensation of paralysis. It’s said that those who do not awake from these episodes will die.

Originally published in the Maclean’s Book of Lists Vol. 1. Based for the most part on the work of Ontario writer John Robert Colombo, who, in scores of books like Ghost stories of Canada, has gathered supernatural tales from around the country; his latest is Jeepers Creepers: Canadian Accounts of Weird Events and Experiences, published last year.