In the news today: Conrad Black, a state visit, an update on autism supports

10 stories in the news today:

Mexican President Enrique Pena Nieto continues his trip to Canada today with an official state visit in Ottawa. It will include a state dinner tonight hosted by Gov. Gen. David Johnston. U.S. President Barack Obama will arrive in Ottawa on Wednesday for the North American Leaders Summit, commonly known as the Three Amigos.

Inquest jurors examining the deaths of seven youths who moved from remote northern Ontario reserves to go to high school in Thunder Bay, Ont., report their findings today. They will decide how the aboriginal youths died and make recommendations to avoid further such tragedies.

The Federal Court will hear a motion today from former media baron Conrad Black, who is arguing that liens placed on his Toronto estate by tax authorities prevent him from selling the property. Black sold the nine-bedroom, 11-bathroom home to multimillionaire businessman Harold Peerenboom in March for $14 million as part of a lease-back deal.

Top executives of Amaya meet with shareholders today for the first time since former chairman and CEO David Baazov, who is heading a possible takeover bid for the online gambling company, was charged with insider trading by Quebec regulators. Baazov took an indefinite paid leave of absence in March and will not seek re-election to the Montreal-based company’s board of directors.

PROBE UNDER WAY INTO USE OF DEAD BISON IN ALBERTA MOVIE

Animal-welfare officials are investigating whether several bison were purposely killed so their carcasses could be used in the filming of an American movie in southern Alberta. Studio 8, the California-based company producing the ice-age movie “The Solutrean,” says it is also conducting an internal review, but has so far found no evidence supporting the allegation. 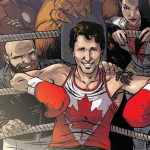 Make way, Liberal cabinet: Prime Minister Justin Trudeau will have another all-Canadian crew in his corner as he suits up for his latest feature role — comic book character. Trudeau will grace the variant cover of issue No. 5 of Marvel’s “Civil War II: Choosing Sides,” due out Aug. 31.

— The Conference Board of Canada will release its latest outlook for Canada’s aerospace manufacturing industry.

— Statistics Canada will release a report on the victimization of Aboriginal people in Canada, 2014.

— Ontario children and youth services minister will make a statement about autism supports for children, youth and families.