In the news today: Justin Trudeau in London, Canada prepares for Syrian refugees 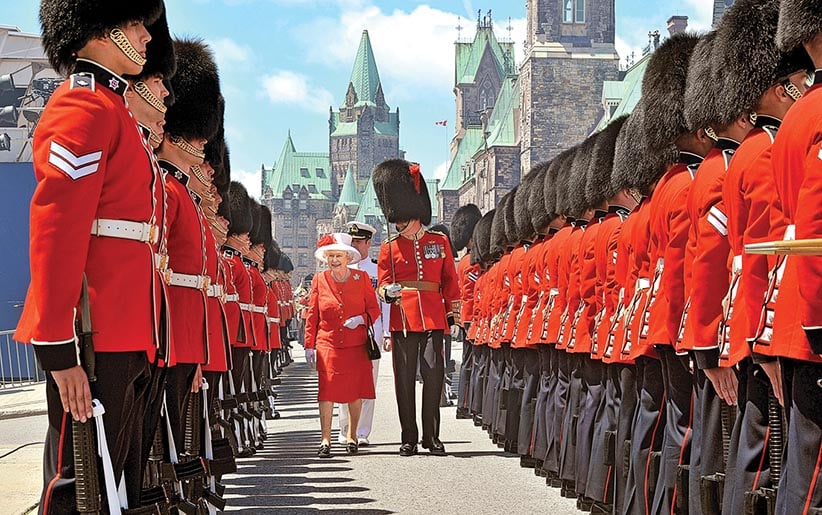 Queen Elizabeth II inspects a Guard of Honour on July 1, 2010. Justin Trudeau is in London today for his first official visit with the Queen. (John Stillwell/Getty Images)

Prime Minister Justin Trudeau has arrived in London to begin a six-day European visit that will wind up in Paris at the UN climate conference. Trudeau was to have an audience with Queen Elizabeth this morning at Buckingham Palace before a sit-down with British Prime Minister David Cameron. Trudeau will later attend a Commonwealth meeting in Malta and a climate conference in Paris.

Staff at Canadian Forces bases across the country are counting beds and making tentative plans to house and feed thousands of Syrian refugees expected to arrive in the coming weeks. Capt. Evelyne Lemire, a spokeswoman at CFB Gagetown in New Brunswick, said they have not yet been told they will receive some of the 25,000 refugees the Canadian government has promised to accept by February.

The Canadian Coast Guard says a cargo ship is drifting off British Columbia’s coast. The MV North Star was sailing from Anchorage, Alaska to Tacoma, Wash., when it experienced an “electrical issue” and lost propulsion. A Prince Rupert-based tug and the Canadian Coast Guard Ship Gordon Reid were en route to the North Star late Tuesday, along with another tug from Neah Bay, Wash.

A report by the Royal Society of Canada says there are major research gaps when it comes to understanding the environmental impacts of oil spills in water. The expert panel is calling for a nationally co-ordinated research program involving academia, government and industry that includes studying controlled oil spills in the field. The report’s release comes as Canada’s oil producers clamour for ways to get their oil to market and industry critics sound alarms over the safety of moving crude via pipelines, train and tanker.

Major Canadian airlines say they’re unfairly shouldering the costs of removing from Canada people who arrive with a passport or other valid document only to be turned away by federal officials. There are “numerous scenarios” in which air carriers must pay the tab for returning such inadmissible arrivals to their home country, Air Canada says in a submission to a federal review panel studying transportation policy.

‘SCUD STUD’ ON THE STAND AT DEFAMATION TRIAL

A former TV journalist returns to the witness stand today in his defamation lawsuit against one of Canada’s largest media companies and columnist Don Martin. Arthur Kent is suing Martin, Postmedia and the National Post over a 2008 article alleging he was defamed during his unsuccessful campaign to win a seat in Calgary for the Progressive Conservatives.

Manitoba’s major political party leaders hold a debate ahead of this spring’s election.

Statistics Canada will 2014 data on farm income and homicide in Canada.

Toronto trial continues for Everton Biddersingh, charged with first-degree murder in the death of his daughter.