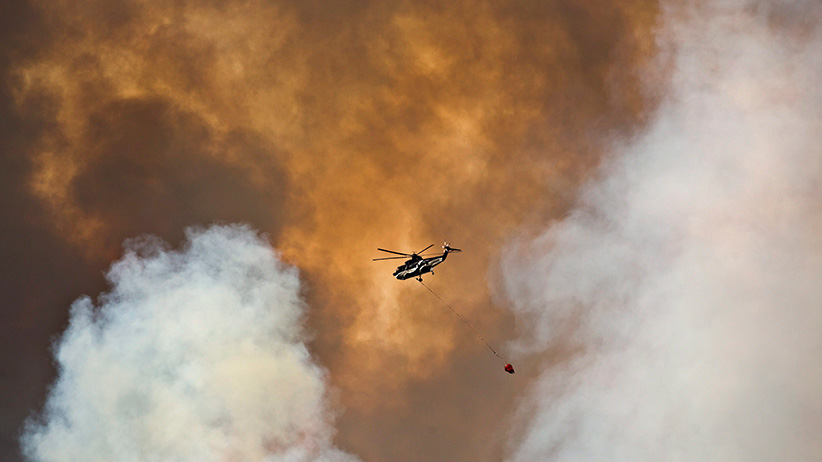 A helicopter battles a wildfire in Fort McMurray, Alta., on Wednesday May 4, 2016.  (Jason Franson, CP)

Exhausted residents of Fort McMurray, Alta., boarded buses with weary resignation Wednesday night when they were told they had to be evacuated yet again, this time from their emergency accommodations in nearby Anzac. The Rural Municipality of Wood Buffalo said changing weather patterns required people to leave Anzac, Gregoire Lake Estates and Fort McMurray First Nation to be bused to Edmonton.

An evacuation order in another part of Alberta has been cancelled. A blaze west of Edmonton caused an evacuation of houses and schools on the Alexis reserve as well as in the hamlet of Glenevis. But late Wednesday night, the order for the entirety of the County of Lac Ste. Anne was lifted and residents were told they could return home.

Laura Gislason and her boyfriend Kyle Benio escaped the Fort McMurray wildfires with just the clothes on their backs. Now safe with relatives in Edmonton, her thoughts centre on the dog and cat they were forced to leave behind: a 16-year-old bichon-Shih Tzu named Gabi and Pastel, a five-year-old calico.

A report being released today says Canadian consumers were on the losing end of a gamble by the former Conservative government to create more competition in the wireless market. And the study by researchers at the Montreal Economic Institute says the country’s telecom regulator can learn from that failed policy by backing away from calls to interfere in the broadband Internet marketplace.

The federal government embarks today on a formal review of Canada Post that will look at whether the Crown corporation should continue with its plan to cut door-to-door mail delivery. The four-member independent panel could also examine whether the national letter carrier should get back into the banking business.

Treasury Board President Scott Brison appears before a Commons committee to discuss the Access to Information Act.