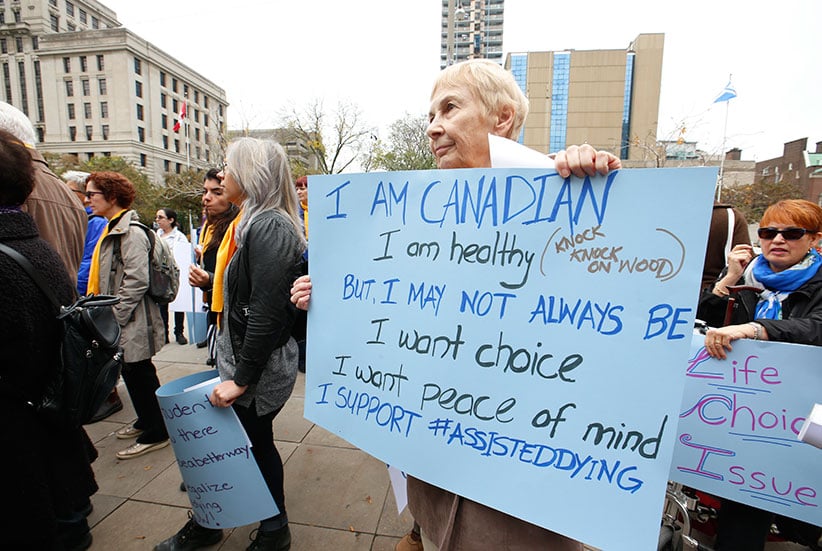 Twelve stories in the news today from The Canadian Press:

The Senate has sent the federal government’s controversial bill on assisted dying back to the House of Commons with a major amendment that guts the central premise of the proposed law: that only those who are near death should qualify for medical help to end their lives. The bill, as amended over the past two weeks of lengthy debate in the upper house, passed late Wednesday by a vote of 64-12 with one abstention.

Former military members are planning a protest today in Halifax over the federal government’s treatment of a 94-year-old Norwegian veteran. The group Banished Veterans organized the event after Petter Blindheim was denied entry into a federally-funded hospital. Ottawa rejected Blindheim’s request for a bed at the Halifax site because it says he could receive adequate care at existing provincial facilities.

Prime Minister Justin Trudeau is expected to make a major transit funding announcement today in Metro Vancouver. He is scheduled to meet Premier Christy Clark in Burnaby, B.C., and make an announcement at the SkyTrain operations centre. The Liberal government has already committed to provide $370 million for transit improvements in Metro Vancouver.

The Opposition Conservatives are questioning the Liberal government’s rush to expand the Canada Pension Plan that could give Canadians more in retirement by taking more off their paycheques today. Finance critic Lisa Raitt says the government hasn’t provided the evidence to show that there would be widespread benefits from the proposals federal and provincial finance ministers are now poring over.

A new study says automatically raising workplace pension contributions in tandem with the cost of living is unnecessary because Canadian retirees increasingly tighten their purse strings after they reach 70 years old. The report by the C.D. Howe Institute think tank also argues that tying up the extra funds in pension contributions is an inefficient use of scarce financial resources for Canadians.

Visa is accusing Walmart of using consumers as pawns in its battle over merchant fees by threatening to ban the popular card from its Canadian stores. Visa says Walmart is “unfairly dragging millions of Canadian consumers into the middle of a business disagreement.” Walmart said last weekend that “unacceptably high fees” has prompted it to stop accepting Visa beginning July 18 in Thunder Bay, Ont., then at its more than 400 Canadian locations.

Bank of Canada governor Stephen Poloz says the country’s economy is finally making progress after hobbling through the effects of the slow U.S. recovery, feeble exports and a stubborn commodity-price slump. Poloz told the Yukon Chamber of Commerce Wednesday thay said while the economic situation remained complicated and uncertain, he was confident Canada was emerging from its stretch of slow growth.

A delegation from Alaska says it is time to enforce the century-old Boundary Waters Treaty between Canada and the United States when it comes to northern British Columbia mining activity. The group is in Ottawa this week seeking to enlist federal help in stopping B.C. copper and gold mines from polluting the headwaters of key salmon rivers that flow from Canada into Alaska.

Saskatchewan Premier Brad Wall will discuss the Energy East pipeline and other matters in Montreal with Quebec Premier Philippe Couillard.

The National Energy Board will release details about the Energy East hearings at a news conference in Calgary.

The Canadian Centre for Policy Alternatives is scheduled to release a report on the impacts of the Energy East pipeline.

Statistics Canada will release the Canada’s international transactions in securities for April.