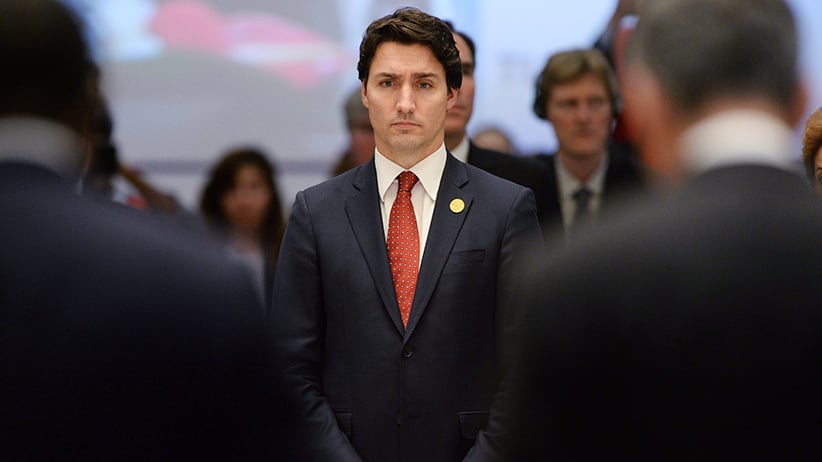 Prime Minister Justin Trudeau takes part in a moment of silence at the start of a plenary session at the G20 Summit in Antalya, Turkey, earlier this week. (Sean Kilpatrick/CP)

Two Air France flights bound for Paris were diverted to airports in Halifax and Salt Lake City, Utah on Tuesday night due to what the airline said were “anonymous threats” that were received after both planes had taken off. Both the RCMP and FBI said early Wednesday that nothing suspicious had been detected on either aircraft.

A Calgary lawyer who has admitted she leaked damaging information about a former television journalist running for a seat in the Alberta legislature is set to testify at a defamation trial today. Arthur Kent, 61, alleges Postmedia, the National Post and former columnist Don Martin defamed him when he was campaigning in the Calgary Currie riding for the Progressive Conservatives in the 2008 provincial election.

At least three investigations are underway in the case of an investment dealer and former Canadian Olympic rower who has gone missing from Victoria. Investia Financial Services Inc. has launched a probe into the activities of Harold Backer, who is also the subject of two missing-persons investigations — in his hometown and in Washington state. Victoria police have said Backer, 52, told his wife on Nov. 3 that he was going for a bike ride but failed to return home.

A Toronto family is planning to hold a news conference this morning to release video of police allegedly assaulting a man during a mistaken arrest. The family of the 21-year-old Toronto man is launching a $5 million damages suit against Toronto police, alleging he was violently assaulted by several officers.

Change is coming to Alberta’s electricity sector, but industry watchers are divided on how it will affect rates for consumers already hit hard by the enduring global oil price slump. Pointing to Ontario, TransAlta chief executive Dawn Farrell recently raised the spectre of rate hikes while pushing for the Calgary-based utility’s proposed plan to transition away from coal-fired power plants.

Who’s sexier: Prime Minister Pierre Trudeau or Mexican President Enrique Pena Nieto? That’s the burning question on the front page of a Manila newspaper on the opening day of the Asia Pacific Economic Co-operation leaders’ summit in the Philippine capital. A caption with a large photo of the two leaders on the front of the Philippine Daily Inquirer asks: “Ladies choice Are you with Team Nieto or Team Trudeau?”

Final arguments begin in Montreal at the first-degree murder trial of Guy Turcotte.

Trial continues for Toronto police Const. James Forcillo, charged in the shooting death of Sammy Yatim on a streetcar.

Quarterly results are due today from Metro Inc. and Loblaw Companies Ltd.

The Canadian Association of Oilwell Drilling Contractors releases its drilling forecast for 2016.