In the news today: Refugees, Charbonneau, a climate strategy from Ontario 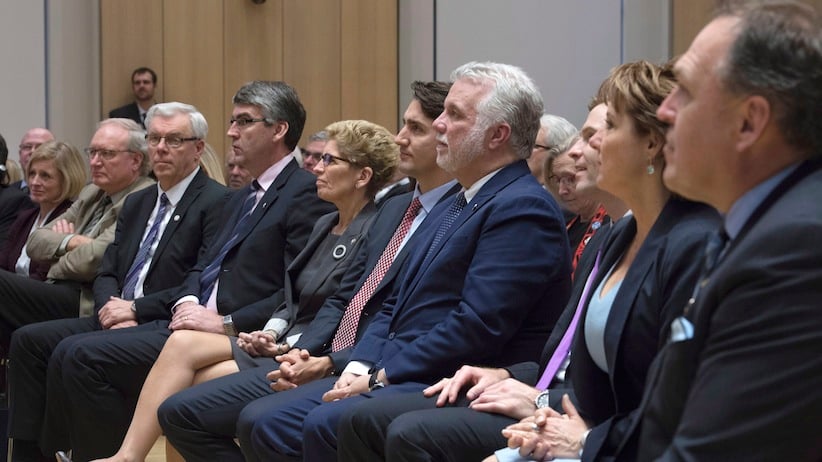 Prime Minister Justin Trudeau will head to the COP21 climate conference in Paris with a little wind at his back. A meeting of Canada’s first ministers Monday in Ottawa _ the first in almost seven years _ ended with 11 provinces and territories humming from the same environmental hymn book as Trudeau’s newly elected Liberals.

REFUGEE PLAN TO BE UNVEILED TODAY

The nuts and bolts of how Canada will take in thousands of Syrian refugees will be rolled out today. Syrians have been steadily arriving in Canada for months and some will count against the Liberal promise to resettle 25,000 people by Dec. 31, a milestone the government is expected to say today that it is unlikely to meet.

The Kurdish region of northern Iraq is open for business but it wants more help from Canada to keep it that way as it struggles to fight ISIL, says its foreign minister. Falah Mustafa Bakir, who is in Canada for a short visit, say he’s here to thank the government for its humanitarian aid and military support, and for ask for that support to continue.

A Conservative member of the Alberta legislature lauded as “a big man with a giant heart” was killed Monday after stopping on an icy Alberta highway to help a motorist whose car had flipped in a median. Manmeet Bhullar, 35, was one of only 10 Conservatives to win re-election this spring when the NDP swept to power. Calgary Mayor Naheed Nenshi said his friend was a “true warrior for fairness and justice.”

Ontario will release its long-term strategy to fight climate change today. Environment Minister Glen Murray says the province plans to achieve an 80-per-cent reduction in emissions over 1990 levels by 2050. He says the government will outline how it will get to that goal, and detail the challenges ahead and some potential solutions.

The long-awaited report into corruption in Quebec’s construction industry is set to be made public this morning. Superior Court Justice France Charbonneau will deliver a statement at 11 a.m. ET as the report is released online.

Armed with US$2.5 billion in new financial support, Bombardier’s top executives meet with institutional investors in New York City this morning to outline “strategic imperatives” for the troubled Montreal-based transportation giant. Among other things, chief executive Alain Bellemare and his team are expected to lay out a road map for the company’s financial performance.

The Conference Board of Canada will hold a one-day Climate Change, Security and Defence Conference in Ottawa.

Trial continues in Saint John, N.;B., for Dennis Oland, accused of second-degree murder in the death of his father.