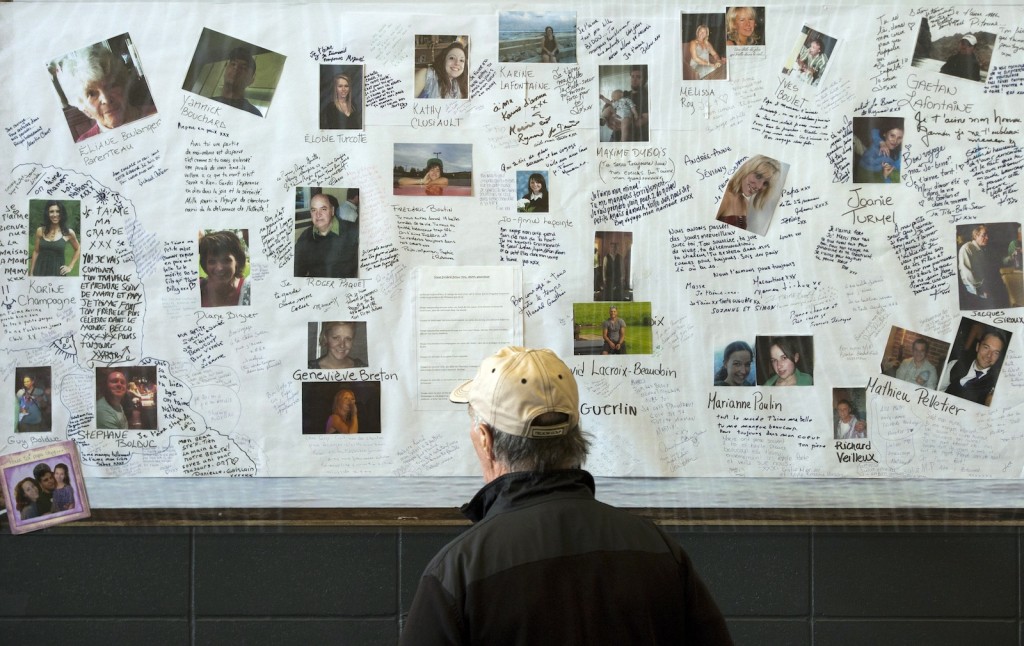 A man looks at photos of some of the victims of the devastating fire as part of the commemorative events in Lac-Megantic, Que. Ryan Remiorz/CP

A Quebec Superior Court Justice will hear arguments today about whether or not to approve the $431.5-million settlement fund for victims and creditors of the 2013 Lac-Megantic, Que., train derailment that killed 47 people. About 25 companies accused of responsibility in the disaster have offered that amount in exchange for release from legal liability in the U.S. and Canada.

Edmontonians will get one last chance today to say goodbye to a 35-year-old city police officer who was killed in the line of duty. A regimental funeral and celebration of life will be held for Const. Daniel Woodall, who was shot and killed June 8 while trying to serve an arrest warrant to a man suspected of the anti-Semitic bullying of an Edmonton man and his family.

A new poll finds most people questioned have no idea Canada is one of the countries in negotiations for a trade deal among nations on both sides of the Pacific. The Environics survey found that 75 per cent of the one-thousand Canadians interviewed this month had never heard of the Trans-Pacific Partnership.

BEHIND THE EI BACKLOG

A government document obtained by the New Democrats suggests budget cuts may be partly responsible for a backlog in processing employment insurance claims. The briefing note outlines how federal budget cuts in 2013 made it more difficult to process EI claims and send either a payment or a denial letter within about a month of receiving an application.

Todd Holt says the scars of being sexually abused by former junior hockey coach Graham James will never fade away, but every new accuser that comes forward helps lessen the load. Holt, a standout player with the Swift Current Broncos from 1989-1994, is watching the latest legal proceedings against his former mentor and convicted pedophile closely.

B.C. SCHOOLS TO INCLUDE ABORIGINAL FOCUS

Students in British Columbia will learn about the ongoing legacy of Canada’s residential schools when new curriculum is implemented. The kindergarten-to-Grade-12 curriculum that addresses aboriginal history, culture and perspectives is about to be released to B.C. teachers and schools in preparation for the new academic year.

For those of us who lack the physique and agility needed for a part in a Cirque du Soleil show, there is now a way to join the cast of the company’s newest production via the latest in virtual reality technology. The company has partnered with Montreal-based production house, Felix & Paul Studios, to release “Inside the Box of Kurios,” a virtual-reality experience somewhere between a traditional film and a video game that puts viewers inside the show.

Statistics Canada will release the wholesale trade figures for April.