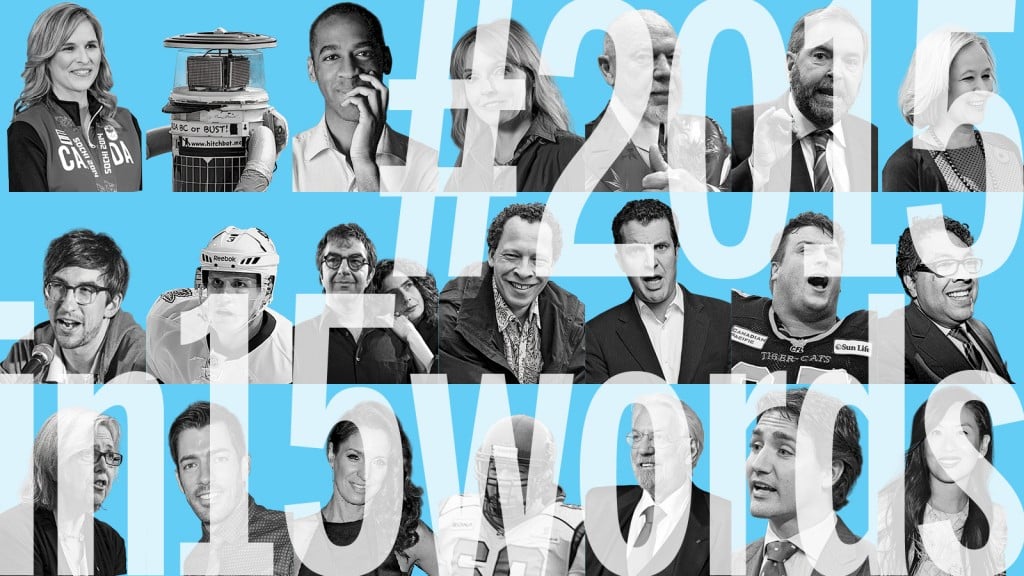 Writing a sentence (or two) that is exactly 15 words can take a few tries.
The added challenge of it being a statement about 2015 makes it no easy endeavour.
We asked more than 100 notable Canadians from the world of politics, business, and entertainment to try.
Some offered predictions, a few wrote poetry, and a couple even gave us doomsday jokes.
Now, it’s your turn. Submit yours by tweeting with the hashtag #2015in15words. (One word, technically!)
We’ll update this page with our reader favourites. Good luck—and have a great 2015!

A year for reconciliation with indigenous peoples, and also for building globally competitive, climate-resilient municipalities.
Don Iveson, Mayor of Edmonton 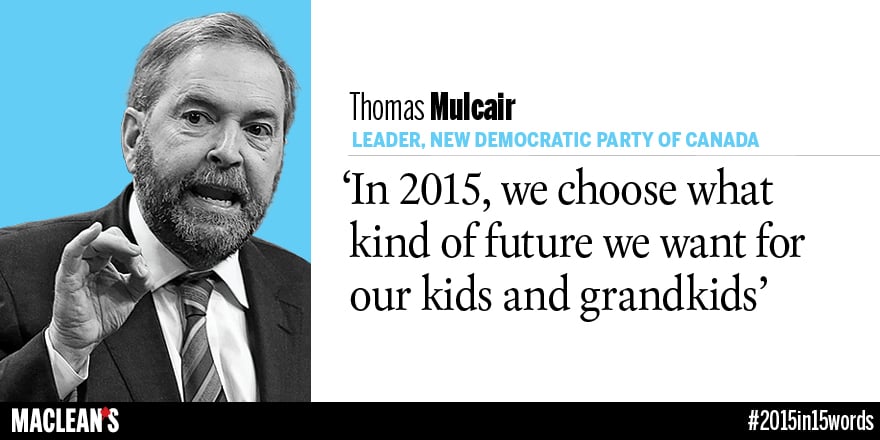 I hope Canadians fall in love with winter again. Strap on snowshoes and head outside!
Laureen Harper

Let’s make 2015 the year of internal free trade — and toast it with BC wine!
Christy Clark, premier of British Columbia 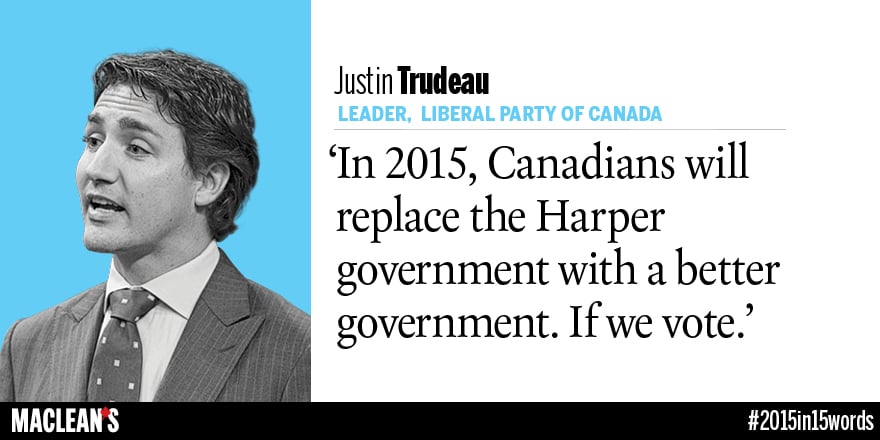 Ontario is very proud to welcome the Pan Am and ParaPan Am Games in 2015!
Kathleen Wynne, premier of Ontario 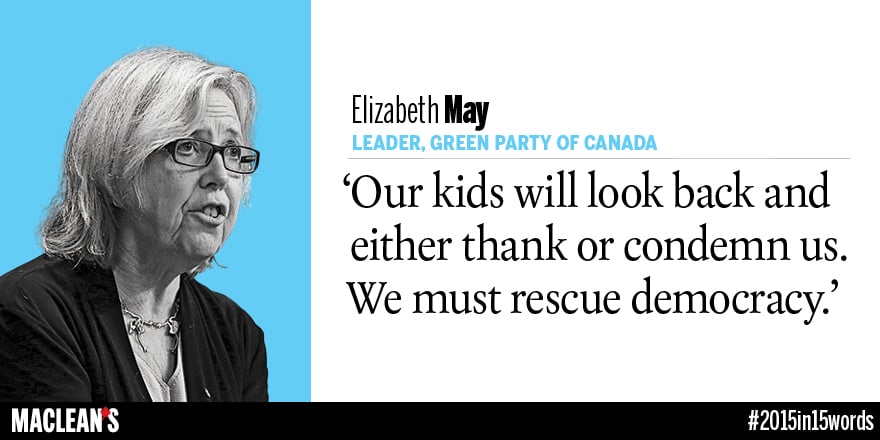 In 2015 we help the sandwich generation deal with the challenges facing youth and seniors.
Greg Selinger, premier of Manitoba

Hope for change in 2015 heightens the optimism for better relations and respect in Canada.
Derek Nepinak, Assembly of Manitoba Chiefs Grand Chief

2015: the year of urbanity and cities, and Montréal will be bold, innovative and inescapable.
Denis Coderre, mayor of Montreal 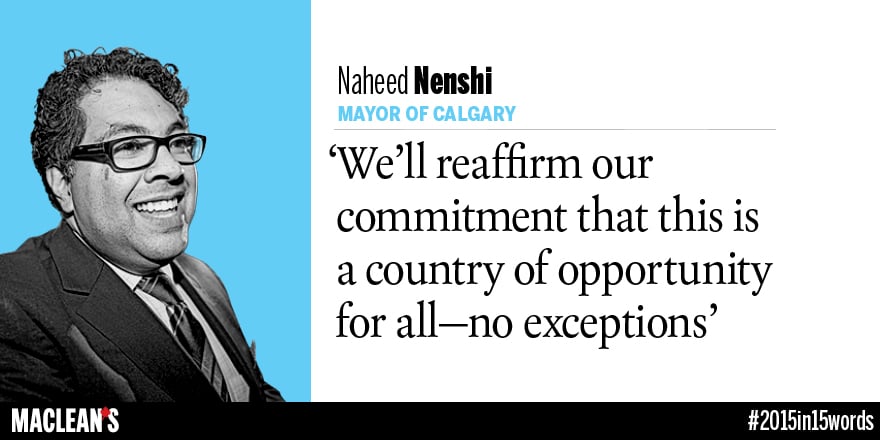 Sentiment on our economy is so pessimistic that it might just win 2015’s upside-surprise sweepstakes.
David Rosenberg, economist

Put “we” before “me” and thrive––because being good to your people is good business.
Peter Aceto, CEO of Tangerine

An organization’s long-term success will hinge upon its ability to develop and grow tomorrow’s leaders.
Bharat Masrani, TD CEO 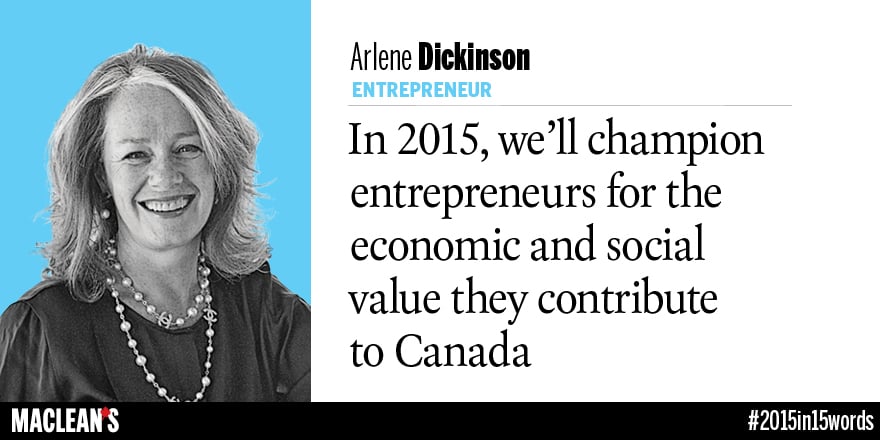 In 2015 I’ll continue to be grateful for the best of luck: Being a Canadian.
David Chilton, author of The Wealthy Barber

In 2015, Canadian industry will embrace machines with minds that sense, think and speak data.
Elyse Allan, CEO of GE Canada

2015:  It’s Canada’s time to become a leader in creating a healthier, more sustainable world.
Kathy Bardswick, President and CEO of the Co-operators

Things will get much worse and we’ll all likely die a failure. Happy face emoticon.
Dave Bidini, author and musician in the band, the Rheostatics 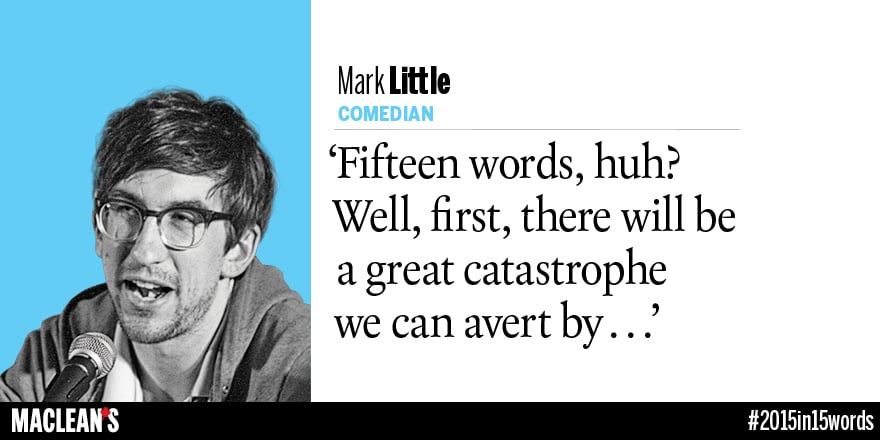 In 2015, I’ll get to the root of things by eating more beets and ginger.
Eliza Robertson, short-story author

The complexity of our world will force us to listen and learn from each other.
Jeff Melanson, CEO and president of the Toronto Symphony Orchestra

Make 2015 your absolute last year of procrastinating the things you want to improve upon.
Gerry Dee, actor and comedian

My hope is for kindness to become a currency much bigger than money or fame.
Chantal Kreviazuk, singer 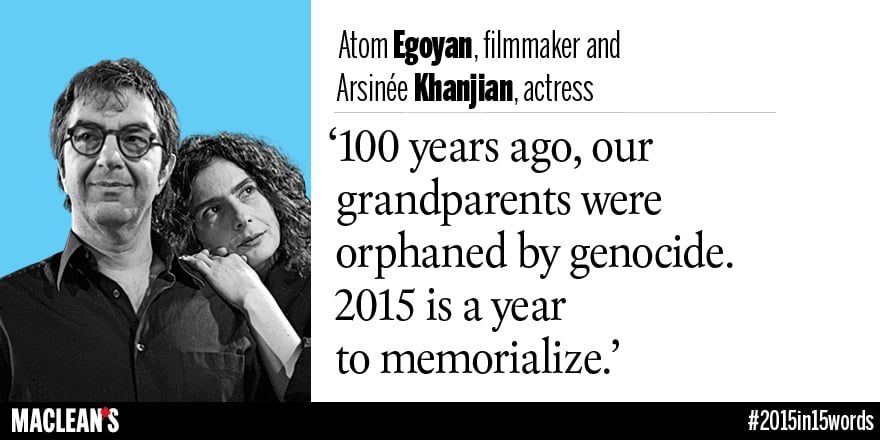 The winter will be short, the summer will be long and hot, the fall glorious.
Clement Virgo, filmmaker

Less of everything, more of so little, less exploitation, more imagination, less I, more you.
Jorn Weisbrodt, artistic director of the Luminato Festival

We will make sure that people living with dementia have safe, dignified and kind care.
Louise Penny, author, whose husband Michael has been afflicted this year

Make more time for yourself: simplify, unplug and really focus on living in the present.
Karen Kain, artistic director at the National Ballet of Canada 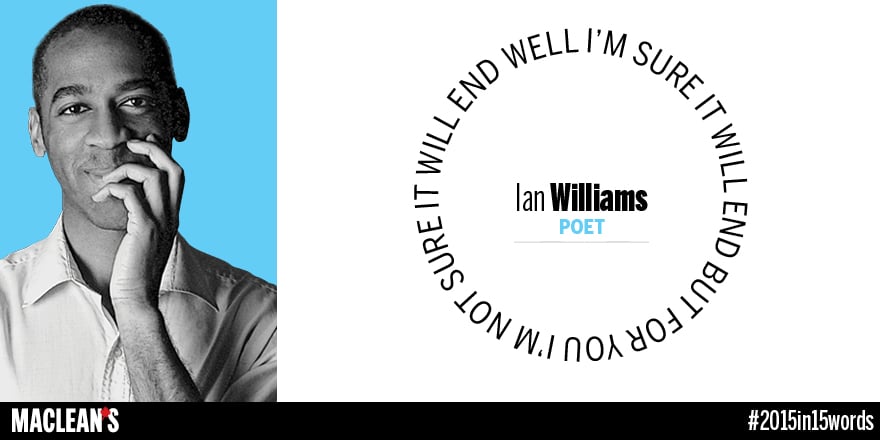 2015 will be the Year of the Movement. To endure — be transparent, others-focused, and community-driven.
Paul Brandt, country musician

We will realize that being a version of ourselves puts our happiness at a distance.
Jully Black, R&B singer-songwriter

It is almost as if, as a species, we have a fear of success. – Dewdney.
Emily Haines, Metric, quoting from Toronto author Christopher Dewdney’s book Soul of the World

Read something that upsets your world view, that makes you feel a little bit uncomfortable.
Esi Edugyan, author

Neat-o, the Sun granted another orbit and this planet to do whatever we want with.
Dan Mangan, musician

Seventeen Syllables For Change:
In twenty fourteen
we dreamt of the election
in twenty fifteen.
Shane Koyczan, spoken-word poet 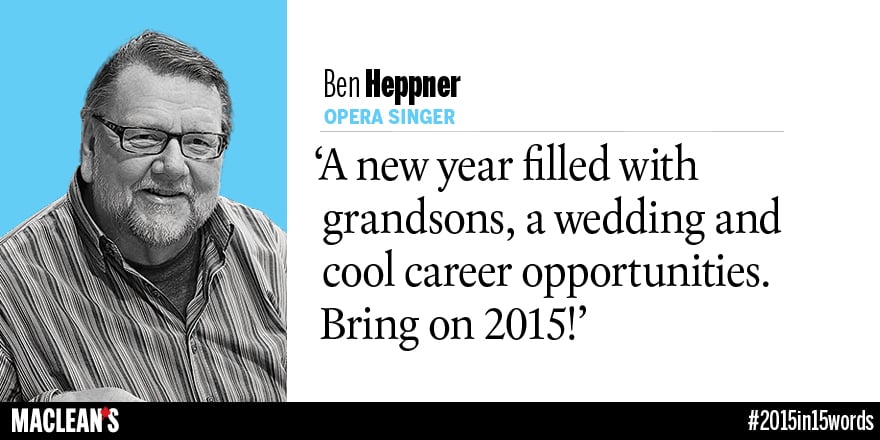 The end of duality is shoving its head down our throats. Let’s surrender already, okay?
Serena Ryder, musician

The Merchant of Water Street opens his doors on a Spring morning and smiles happily.
Jeremy Charles, chef at Raymonds Restaurant

There are colder winds ahead. Don’t look for thicker jackets, just make your insides warmer.
Mustafa the Poet

Sagaciously, a year of reason. Habitually, one of agreeable taciturnity. Mind you, I’m a pragmatist.
Matthew Good, musician

if a real Canadian knows how to make love in a canoe, we lost balance
Jason Collett, singer-songwriter, Broken Social Scene member 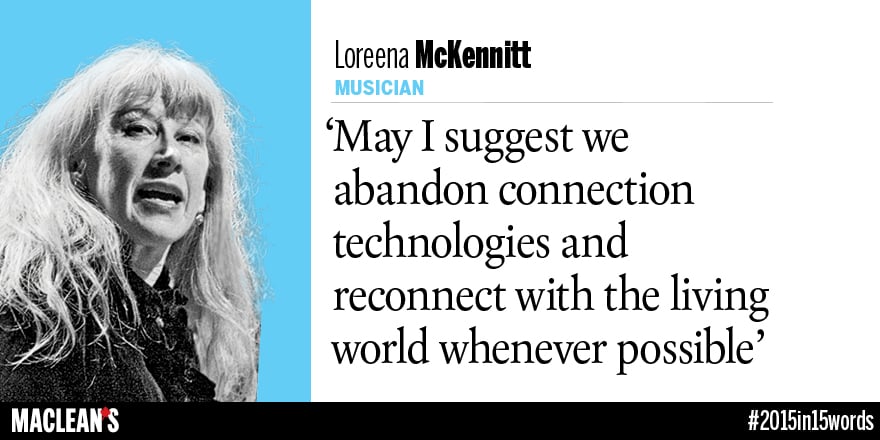 Treatment, care and welfare of animals that provide our food, will become a global priority.
Jann Arden, musician

If the love for the North is real, let’s change the policies that govern it!
Susan Aglukark, musician

People who need great art will find their way, blockbusters, bestsellers and stars be damned.
Marianne Ackerman, novelist and playwright 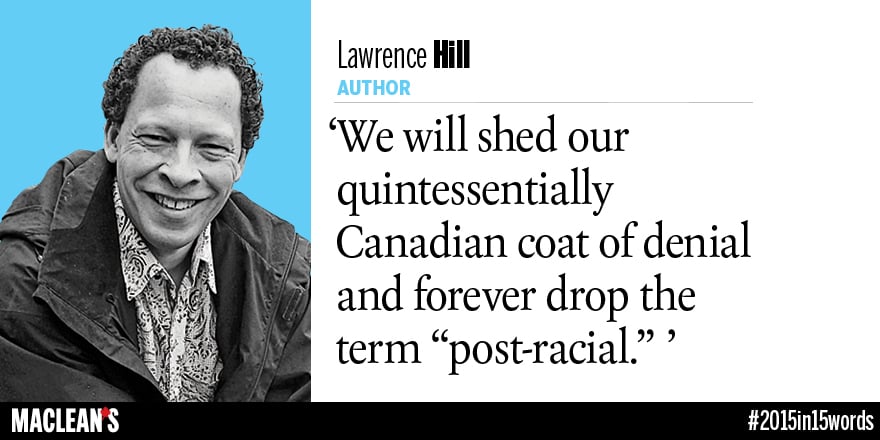 Young women will proudly call themselves feminists, understanding that it is about equality, not misandry.
Kelley Armstrong, author

Canada will reverse course and become a world leader in the fight against climate change.
David Usher, musician

In 2015 … We will all love and support those suffering in silence with mental illness.
Liz Manley, former competitive figure skater

We find the courage and discipline to fully express our individual gifts to the world.
Silken Laumann, Canadian champion mower 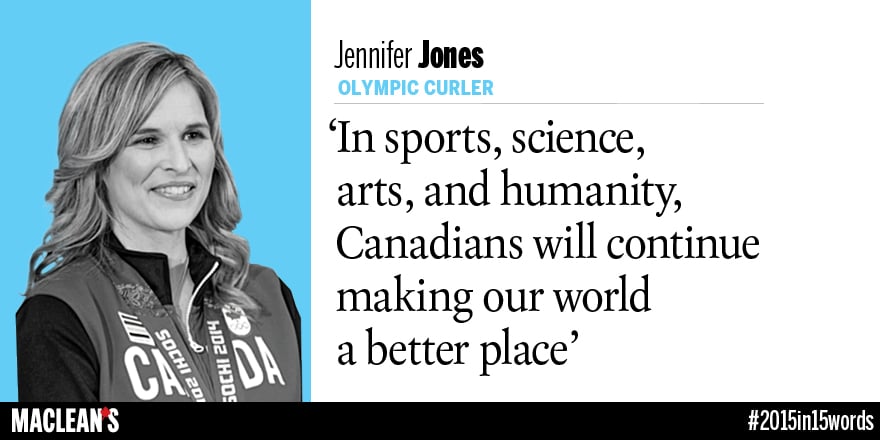 In 2015, we’ll continue the conversation about trauma and mental health. You are not alone!
Theo Fleury, former NHL player and advocate for sexual-abuse victims

For TO2015, we welcome the best athletes of the Americas. Come cheer on Team Canada!
Rosie MacLennan,  trampoline gymnast 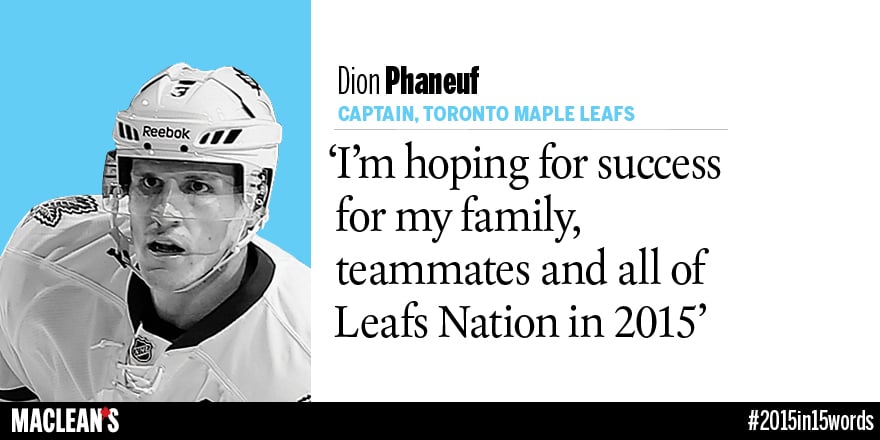 Start believing that we are capable of way more than we give ourselves credit for.
Heather Moyse, multisport athlete and two-time Canadian gold medallist

There must be a turning-point in the fight against sexual violence everywhere on the planet.
Stephen Lewis, Board Chair, Stephen Lewis Foundation

‘What’s up with today’s kids?’ will refer to legions of young volunteers in Canada’s communities.
Craig Kielburger, international activist and co-founder of Free The Children and Me to We

2015 will be the year that we start calling the war against ISIS ‘a quagmire.’
Sam Nutt, founder and Executive Director of War Child Canada

Keep on rawkin in the free world &  doot doola doot doo … do it Yourself !
Nardwuar The Human Serviette, music journalist

2015 is going to bring multicultural cuisines and ethnic music to bind the people together.
Vikram Vij

More than ever, the world is full of opportunity—opportunity for kindness, compassion and collaboration.
Drew Scott, of the Property Bros.

Our voices will grow stronger, our words will be heard and equality will be realized.
Jonathan Scott, of the Property Bros. 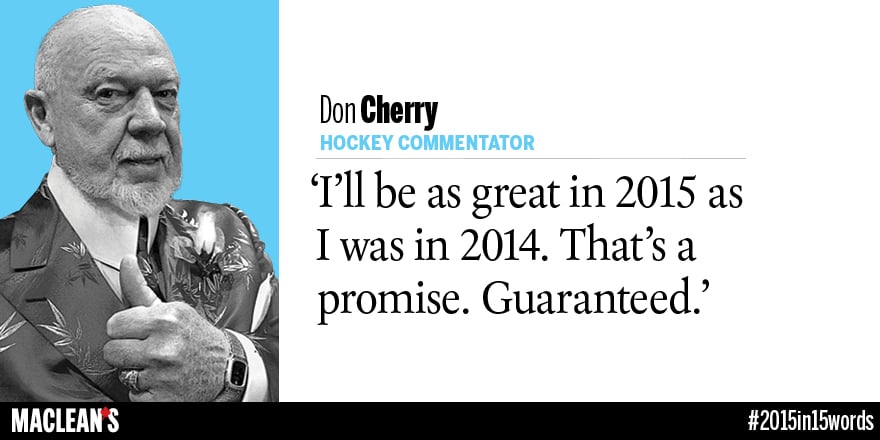 It would be nice if just once this year, social media was not actively anti-social.
Christie Blatchford, columnist

We will see expansion of individual contribution over institutional—via mobile devices and in real-time.
Kirstine Stewart, vice-president of North America media partnerships at Twitter 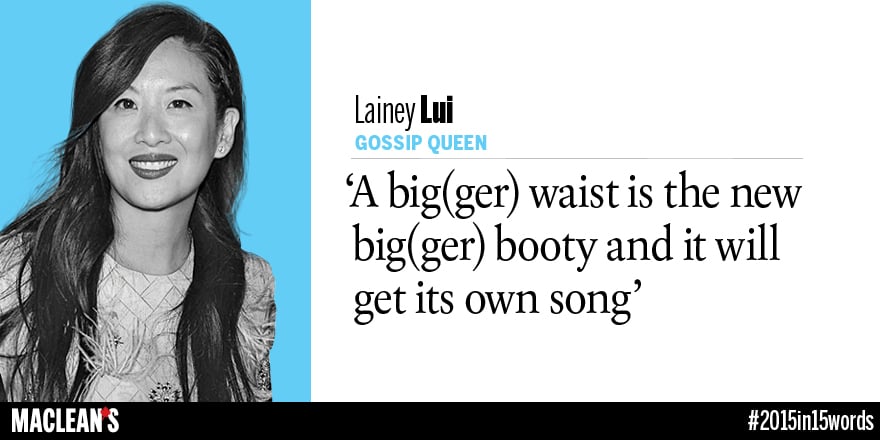 Laurier: “Canada is free and freedom is its nationality.” I’d vote for such a Liberal.
Ezra Levant, host at Sun News Network

Its demise greatly exaggerated, in 2015 let’s squash rumours of the death of traditional media.
Amanda Lang, anchor of the CBC’s The Exchange with Amanda Lang

2015: For better or for worse, the year genomic NIPT (non-invasive prenatal testing) goes mainstream.
Stephen Scherer, director of the Centre for Applied Genomics at the Hospital for Sick Children

Canadians will be in awe of the power of weather and talk endlessly about it.
David Phillips, climatologist for Environment Canada

We’ll decide whether networked computers are there to set us free or enslave us forever.
Cory Doctorow, author and co-editor of Boing Boing

Around the sun
Once more
Our dreams
And courage for
Great things
Yet to explore
Dr. Roberta Bondar

A royal reinterment, a royal genome, working with colleagues who are rockstars in their fields.
Turi King, Lecturer in Genetics and Archaeology at U of Leicester 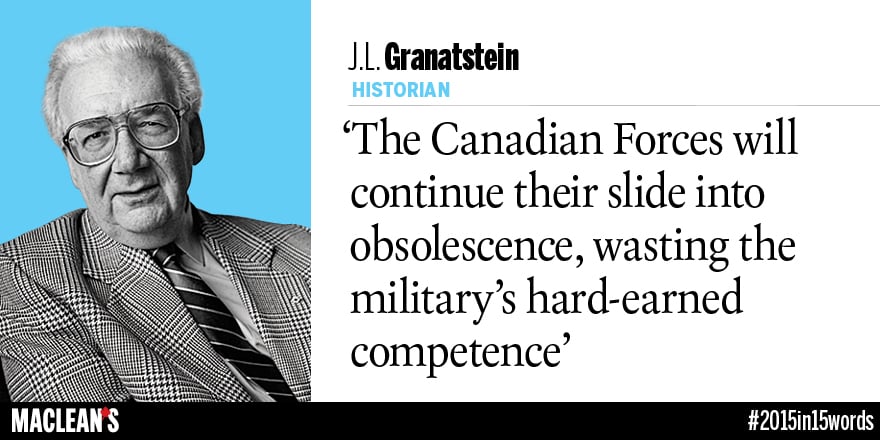 The dangers versus the benefits of artificial intelligence will become the next big international debate.
Rudyard Griffiths, Chair, The Munk Debates