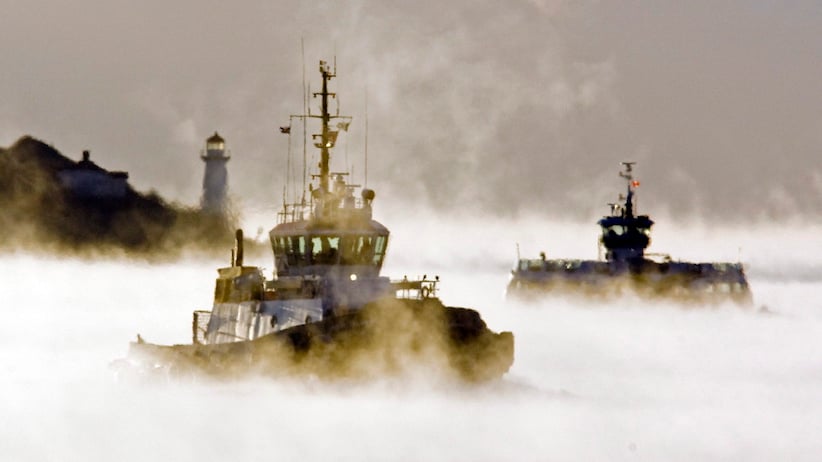 A ferry and tug boat cross the harbour through Arctic sea smoke in Halifax on Monday, Jan. 24, 2011. THE CANADIAN PRESS/Andrew Vaughan

1. Old Halifax Courthouse: At the turn of the century, Halifax’s condemned criminals met their end swinging from the courthouse gallows, pieces of which are still kept in the courthouse today. Years ago, a janitor swore that he saw a ghost in the room where the pieces are kept and, terrified, vowed never to enter the room again.

2. Bedford Basin: At the turn of the century, or so the story goes, a dory full of fishermen got lost in the fog near Bedford Basin, and when their boat tipped, they drowned. Over the years, those who stand along the shore of the Basin on foggy evenings have reported hearing the sound of a dory being rowed into shore, but no boat is ever seen.

3. Halifax Citadel: Among the nearly 40 documented ghost sightings at the Citadel, a woman saw a soldier enter a room, then vanish. Because there was no other exit from the room, she assumed he was a costumed staff member playing a trick. But after speaking with staff, she learned the man was not wearing the type of military uniform worn by any staff.

4. Five Fishermen: Before this four-storey, brick-and- wood building was a restaurant, it was a funeral home. In 1912, undertakers there prepared hundred of bodies retrieved from the wreckage of the Titanic. In 1917, they did the same with victims of the Halifax explosion. In its life as a restaurant, staff have reported seeing taps mysteriously turn on and glasses fly off the shelves. Diners have also claimed to have seen people in old-fashioned dress who disappear when spoken to.

5. St. Paul’s Anglican Church: One of many ghosts born of the Halifax explosion, one window of this church is said to still show the silhouette of the minister of the day, who it’s believed was looking out when the ammunitions-filled SS Mont-Blanc exploded in the harbour.

Originally published in the Maclean’s Book of Lists Vol. 2