Real-life advice on roommates, getting into a full class and why engineer parties are worth checking out 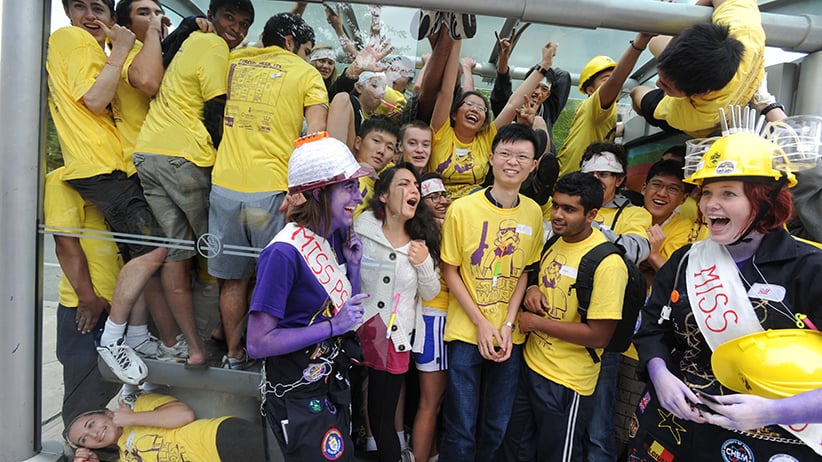 Engineering students at U of T during frosh week. (Vince Tolatta/Toronto Star)

1. You’re not always stuck with a terrible roommate.

Residence brochures show students laughing together as they sit on beds, knees nearly touching. The message is that those two strangers became best friends and so will you and your new roomie.

Hey, it happens. What can also happens is you get the girl who lies around listening to screamo bands at 3 p.m. in the afternoon while you’re trying to study.

Luckily, you can always turn to a residence assistant (a.k.a. don, a.k.a. floor fellow) for advice, and to document the problem.

If things are really bad, you may even get a room change. Schools strongly discourage switching rooms in the first couple of weeks, because they want you to give your roommate a chance, and because they simply don’t have the beds. However, a few students will drop out by October, freeing up rooms for legitimate roommate refugees.

2. People aren’t hooking up as much as you think.

Movies set on college campuses show wild party scenes where even the most socially inept manage to find love. But films are only fantasy. The reality is much less sexy.

According to one of the biggest-ever studies of student health conducted last year, almost a third of Canadian post-secondary students admitted to having had no sexual partners in the 12 months before the survey, while nearly half had just one.

That means most people aren’t hooking up, no matter how much they brag about the hotties they met on Tinder.

3. The engineers seem nerdy, but are totally legit.

Engineers have a reputation for being nerdy outcasts, partly because they have higher course loads that force them to isolate themselves in the library until ungodly hours every night, and partly because they’re actually pretty nerdy.

On top of that, in a program with such a huge gender imbalance (about four in five are men), the straight guys can be a bit awkward around girls.

But that doesn’t mean female students should shun their parties. They may be impressed by the contraptions they’ve built.

High school society is organized hierarchically with male hockey/basketball/football players and female skaters/dancers/cheerleaders on top, and other social strata below. Some people manage to reproduce these structures in residence, but it doesn’t last long.

By reading week in February, most have found a new social group based on common interests instead of geography. They’re writing for the school newspaper, volunteering at an animal shelter, playing on the underwater hockey team, attending meetings of the Medieval Historical Society or meeting people for drinks and a study session every Wednesday after chem.

5. You can get into almost any class.

At some point in your campus career, you’ll be forced to make your timetable after all the classes have been picked over. History of Hip-Hop Culture will be full, while the only arts credit with space left will be Feminist Responses to Everyday Life in Victorian Rural Ontario.

But a fact little known among first-years is that you can always sign up for the course you don’t want, as a back-up, and just go to the class you want. There ought to be enough seats in the lecture hall of the class you desire (someone is always sick or skipping).

Meanwhile, you can keep checking online until someone drops (someone usually does) freeing up an official spot for you. Just remember to drop Feminist Responses so it doesn’t show as a fail.

Alternatively, you may be able to sweet-talk the professor into “signing you in” above capacity.

6. The first-year workload is crazy, but you don’t have to do it all.

You’ll be assigned far more work than you’ve ever seen before. It will often seem impossible to do every single reading and all those practice quizzes. Sometimes it really isn’t possible.

But instead of freaking out and giving up, do as much as you can. If you can’t make it through a long article before class, skip ahead to the conclusion. If you sleep through a lab, ask a classmate if you can copy their notes before the next one. If you get to the night before the final exam and realize you lost your notes that time your laptop died, find the lecture slides online and read them so you can at least make educated guesses.

Most first-year exams are multiple choice, so they’re easy to pass even if you’ve slacked a bit. Your GPA will suffer, but you can make up for that in second year, so long as you’ve learned your lesson.

7. Don’t be intimidated by big classes.

First year is the only time you’re likely to be in a lecture hall with several hundred peers (classes get smaller after that). Those huge classes make it seem like your professors are too busy to answer small questions. Not true.

Professors hold office hours where you can line up at the door to ask specific questions about lectures or discuss paper topics. The line at office hours is rarely long and the wait, if any, is almost always worth it.

If your problems are more general—say you don’t know how to write a sociology paper without plagiarizing—there are people stationed in most schools (writing centres, libraries) who can help.

There are also private tutors who can get you past bigger roadblocks, like teaching you the calculus you missed in high school.

Just make sure you get help before you fall too far behind.