In the news today: Oil, the dollar, the Prime Minister, and the Finance Minister 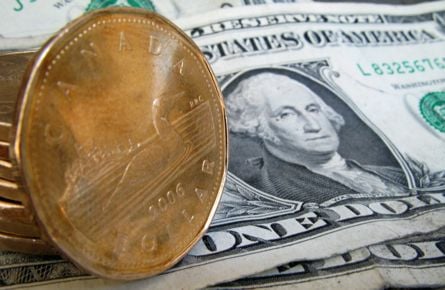 Oil and the Canadian dollar breached two benchmarks Tuesday, with crude briefly dipping below US$30 a barrel and the loonie slipping beneath the 70-cent U.S. level. At one point, a barrel of West Texas Intermediate fell as low as US$29.93 before it regained some ground to settle at US$30.44 a barrel. The Canadian dollar hovered around the 70-cent U.S. mark before ending the day at 70.14 cents U.S. _ its lowest level since April 2003.

Two Ontario cabinet ministers are in northern Ontario today to tour the Nipigon River Bridge, which failed on Sunday and severed the sole east-west route across the region for a day. One lane of the bridge was reopened to cars and lighter trucks on Monday, but there has been no estimate as to when the bridge — which is part of the Trans-Canada Highway — will be fully functional.

The federal public safety minister says the government will open its wallet to help Canadians prepare for natural catastrophes spawned by extreme weather linked to climate change. Ralph Goodale says this will not only stimulate the economy, but ensure communities are better able to deal with floods, forest fires, drought and ice storms.

No matter where Bill Morneau has taken his pre-budget roadshow, the economic storm clouds have gathered overhead. The federal finance minister’s cross-country tour, created to consult Canadians as he crafts his first budget, has been overshadowed by the rapidly deteriorating economic situation.

The premier of the Northwest Territories doesn’t see climate change as a ticking time bomb _ in his part of the country, it’s already gone off. Canada’s North is at the forefront of climate change and its effects can be seen with the naked eye on a daily basis, Bob McLeod said in an interview with The Canadian Press.

Fans of David Bowie gathered at a jam-packed Toronto concert hall on Tuesday to pay tribute to the beloved performer, who died Sunday at the age of 69. The band Holy Holy, which is devoted to recreating Bowie’s groundbreaking early albums performed a broad selection of Bowie tunes. The band, featuring longtime Bowie collaborator Tony Visconti, will perform a second show Wednesday night at the Opera House.

Prime Minister Justin Trudeau will be in Toronto to meet with Mayor John Tory.

Finance Minister Bill Morneau will attend a Toronto conference hosted by the Public Policy Forum, as part of his pre-budget consultations and also visit a Syrian refugee welcome centre.