99 stupid things the government did with your money: Part I 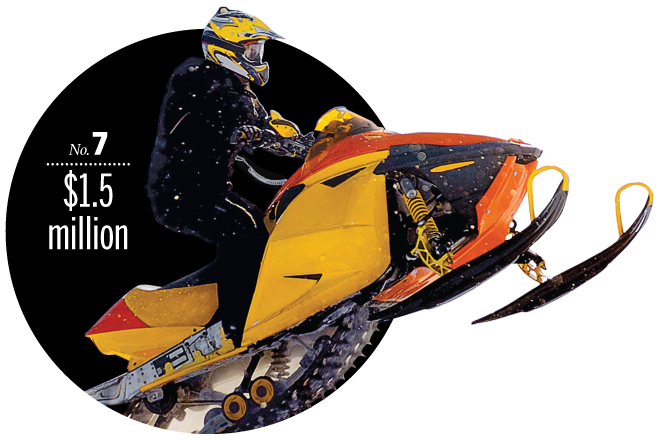 Luxury hotels, hemp body cream and subsidized hip-hop concerts: our second annual list of waste shows spending by all levels of government is still out of control. Find 33 of those stupid things below. And check us out tomorrow to see 33 more stupid things your government did with your money.

Sports & Leisure — when blowing money is the name of the game

1 Bad slice: The City of Abbotsford, B.C. handed a $115,000 “one-time grant” to a struggling municipal golf course, claiming its problems stem, in part, from poor weather. In a report, city staff said “good weather” was among the things “being worked on” to turn it around.

2 Sore loser: Former Regina mayor Pat Fiacco expensed more than $4,000 worth of tickets to sporting events, including $1,055 for Montreal Alouettes season’s tickets, nearly 3,000 km away. The tickets were the result of a bet Fiacco made with former Montreal mayor Gérald Tremblay that the Saskatchewan Roughriders would beat the Alouettes in the 2010 Grey Cup. The Riders lost—and so did Regina taxpayers. 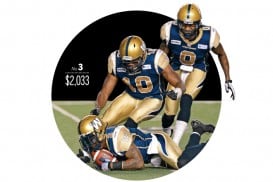 3 Cheap seats: Sam Katz, mayor of Winnipeg, is a big fan of the Blue Bombers, but apparently not enough to pay for tickets out of his own pocket. The mayor billed taxpayers $2,033 for a pair of season’s tickets, even though critics pointed out that other politicians, like Premier Greg Selinger, paid for their own sporting tickets.

4 Losing bet: Vancouver Canucks goalie Roberto Luongo clearly knows when to hold ’em and fold ’em. The B.C. Lottery Corp. paid him $160,000 last year for an endorsement deal that included a $10,000 entry fee into the World Series of Poker event in Las Vegas—pocket change for a man with a decade left on a $64-million hockey contract. 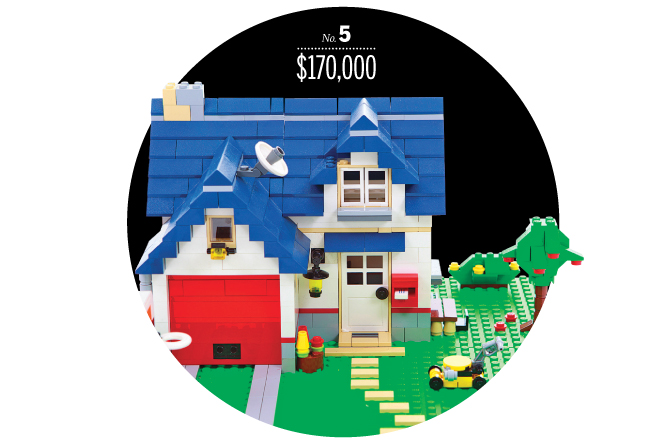 6 Out of bounds: The City of Whitehorse coughed up $1.3 million for Mount Sima, a struggling nearby ski hill. The money was diverted from the city’s infrastructure fund, which had been topped up by the federal government. That was on top of $1.6 million the city gave the hill a year earlier for a ski lift.

Other folks’ money — corporate handouts and subsidies for all 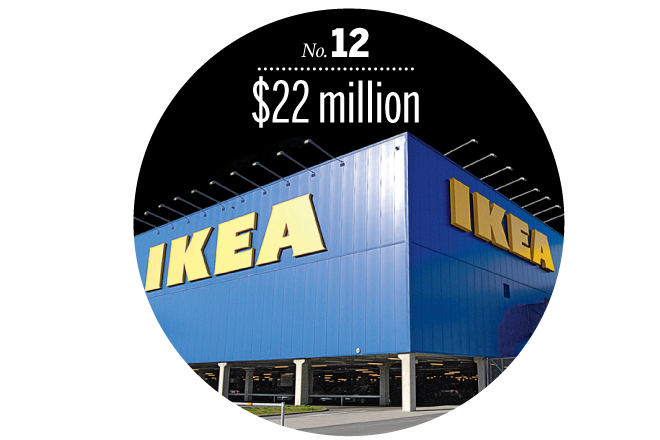 12Korpporät welfår: Ikea is a Swedish retailing behemoth rolling in kronor, but when it came to opening its first store in Winnipeg, that didn’t stop the city and province from offering a combined $22 million in subsidies. Did we mention Ikea’s annual sales of $30 billion are roughly three times what Manitoba brings in each year from all forms of taxes, fees and transfers?

13 Paper chase: In December 2011, Nova Scotia’s provincial government handed $24 million to the owner of the Bowater Mersey paper mill in return for a swath of company land in the hopes of staving off its closure. By June the mill had gone out of business. 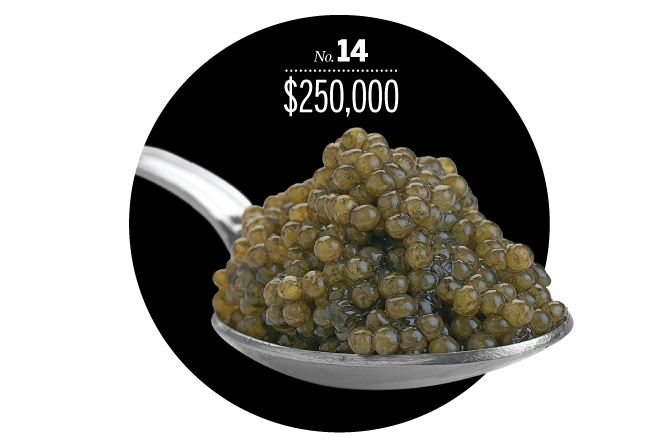 14 Something fishy: For more than a decade, Supreme Sturgeon and Caviar of New Brunswick raked in some $3 million in grants and loans from the federal government before falling into receivership in 2010. Resurrected by new owners as Breviro Caviar, it’s now back in the subsidy business, winning $200,000 from Ottawa in marketing funds and $50,000 to “hire expertise in caviar production.”

15 Flat battery: The B.C. government said it would spend $2.7 million to build hundreds of electric-car-charging stations across the province in an effort to encourage drivers to buy vehicles such as the Chevy Volt and Nissan Leaf. That’s in addition to a $5,000 rebate to drivers. Yet just 210 electric vehicles have been sold in the province—effectively translating into an $18,000 per vehicle subsidy for the carmakers.

Cultured club — the same old song and dance for taxpayers

18 TV time: British Columbians saw $48,000 go to bringing Entertainment Tonight Canada to Vancouver for three days. Included in the provincial payout was $16,000 in airfare from Toronto and $12,000 worth of hotel accommodations.

19 Tear down the haul: The federal government subsidized Quebec City’s summer festival to the tune of $1 million, in part to help pay for a show by former Pink Floyd band member Roger Waters. The Plains of Abraham was the last stop on the aging rocker’s Wall Tour, which earned a total of $158 million from worldwide ticket sales.

20 Party on: The B.C. government sponsored a $3-million rock music tour last summer called JobFest, where attendees (when there were any) were offered on-site career counselling. Roughly $100,000 went to promotional kits, including glow sticks, guitar picks and glossy posters, mailed out to local businesses and media.

21Moving pictures: Winnipeg city council voted to spend $10,000 to transfer a work of art from the old Winnipeg airport to the University of Manitoba, even though city staff recommended denying the request.

22 Stamped out: 2012 marked the 100th anniversary of the Calgary Stampede, and though it bills itself as the “Greatest Show on Earth,” the federal government still felt the need to kick in $5 million to promote it—including putting a chuckwagon food truck in New York City. 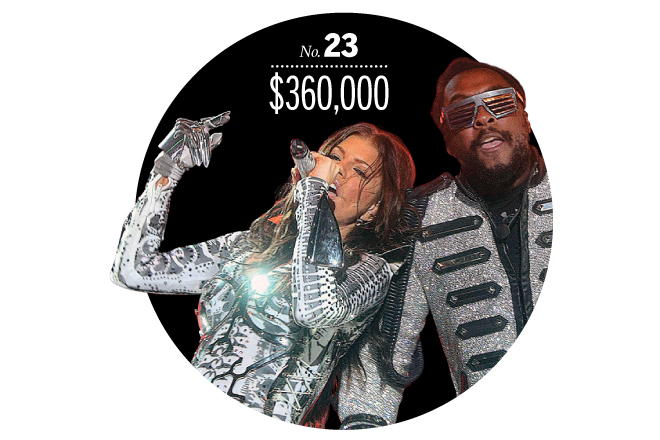 23 A black eye: In May, Halifax councillors voted to cut a cheque for $360,000 to cover bad debts stemming from a money-losing Black Eyed Peas concert two years earlier.

Showing off — The price of looking good is on the rise

24 Maybe he’s born with it: Not one to be caught without his game face on, it was revealed the office of Finance Minister Jim Flaherty expensed $130 worth of cosmetics for an apparent beauty emergency ahead of a televised budget announcement. Flaherty’s staff scrambled to purchase concealer, blush, loose powder and shaving supplies to do the minister’s makeup after a cosmetician cancelled at the last minute. For anyone wanting to replicate the look, Flaherty wears a combination of Maybelline, CoverGirl and Smashbox.

25 Funny money: The Bank of Canada spent nearly $40,000 to promote its new $20 bill. The spending included $35,832 to a company to design and install seven-storey images of the new polymer note on the bank’s headquarters in downtown Ottawa in May. In total, spending to promote the new bill equalled 1,942 of the new $20 notes.

26 Fumble for fame: Four small cities, including Guelph, Ont., and Langley, B.C., forked over a total of roughly $100,000 to have former football great Terry Bradshaw appear in short promos about them that were meant to attract new American business to small-town Canada. The videos found airtime mostly off hours, while the famous QB, who narrates the promos, couldn’t sound more bored.

27 Over-planned: The recession may have ended a while ago, but that hasn’t stopped Stephen Harper’s government from spending millions on advertisements featuring its Economic Action Plan stimulus slogan. The government spent $16 million in three months on feel-good commercials about Canada’s economic prosperity.

28 Top gun: Despite getting a mock jet for free from manufacturer Lockheed Martin, Defence Minister Peter MacKay still managed to spend $47,000 on a 2010 press conference where he posed with the fake plane. 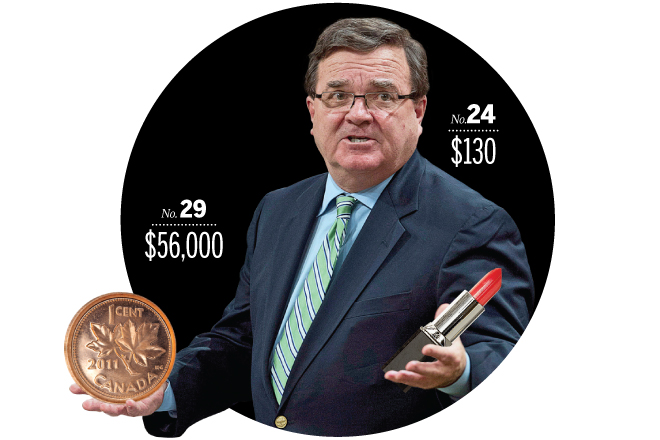 29 Centless spending: Eliminating the penny was supposed to save the government, but not without a final splurge. Finance Minister Jim Flaherty stamped the last Canadian penny in a photo op that cost $56,000.

30 Gold medal waste: The federal government spent at least $4.5 million on ads that ran during the two weeks of the London Olympics, but shelled out just $214,000 to Canadian athletes who won medals during the Games.

Meanwhile: Jason Kenney’s department spent almost $750,000 monitoring what ethnic media were saying about the immigration minister and his ministry while denying the exercise was politically motivated (31); B.C. Premier Christy Clark’s office spent $64 million on ad campaigns, twice that of her predecessor (32); the City of Ottawa spent $3,500 on a consultant to teach firefighters how to talk to the media, despite having a communications staff of 44, many of whom were capable of doing it themselves (33); 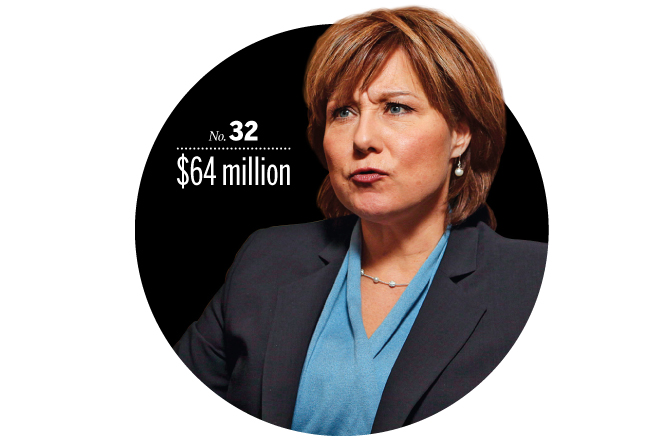