A B.C. reconciliation totem's lessons on how to move forward 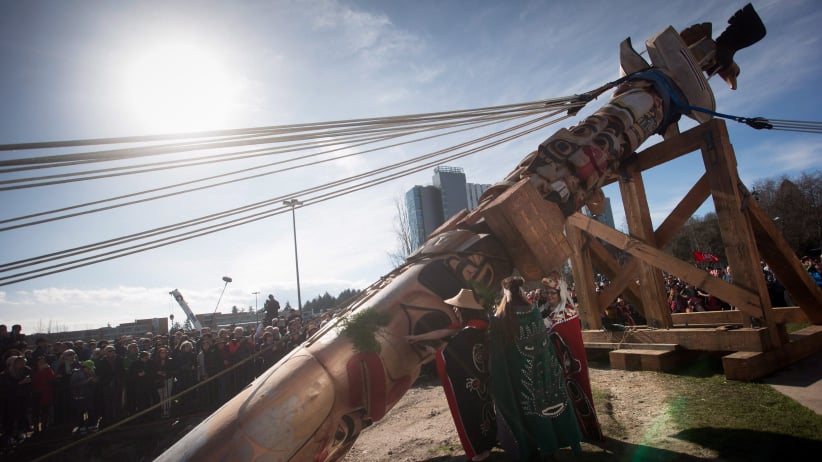 First Nations women bless a Reconciliation Pole before its raising at the University of British Columbia in Vancouver, B.C., on Saturday, April 1, 2017. The 17-metre red cedar pole tells the story of the time before, during and after the Indian residential school system. (Darryl Dyck/CP)

On a sunny June afternoon straight out of a Beautiful British Columbia ad campaign, Haida hereditary chief and pre-eminent artist Jim Hart is putting the finishing touches on his latest work at the University of British Columbia: an impressive totem pole, with a stylized replica of the residential school his grandfather attended as its centrepiece.

The “reconciliation pole,” commissioned by UBC and the Audain Foundation, is embellished with more than 68,000 copper nails—hammered in by survivors, volunteers and schoolchildren—that represent the thousands of children who died at residential schools. The schools, which first opened in the 1880s, stripped Indigenous children of their culture and language, and subjected them to often inhumane conditions. The last one closed in 1996.

Viewed from below, the nails take on skeletal shapes on the bottom of the school. Above it, carvings of children by a variety of First Nations artists representing survivors from across Canada—from the Inuit to the Musqueam to New Brunswick’s Maliseet—hold hands. Their school-issued ID numbers are carved into their torsos, and guardian spirits hover protectively above them. Starting from the bottom, the pole embodies a timeline of pre- and post-contact—with an eagle at the top that the artist carved with his late son Carl—representing a way forward through “working together,” says Hart. The pole is at once a moving work of art, and a historical monument.

But for a few details, the pole is now finished after three years of work, which continued even after the pole was officially raised in April, at a ceremony at UBC attended by more than 3,000 people. There, carver and artist Christian White—Hart’s cousin, who also worked on the pole—shared with me the story of their grandfather Geoffrey White’s escape from the Coqualeetza residential school in Sardis, B.C., depicted on the totem.

“There was a Victoria Day parade,” he recounted, “and they had a bunch of Indian kids marching in uniform down Hastings Street. My grandfather, who was then about 12 years old, took the opportunity to keep marching right down to the docks, where there were some Haida men working.” He stayed there for a few weeks, working alongside them, before being discovered by administrators and taken back to the school. But word of his mistreatment soon reached his parents through the Haida dockworkers, White said, and they came to rescue him.

But others were not so lucky. Of the roughly 150,000 who were placed nationally in the schools that were funded by the federal government and administered by churches—some 30 per cent of Indigenous children—tens of thousands were victims of what the government has admitted was “widespread abuse.” The reconciliation pole, says Hart, is a way to remind people of Canada’s forgotten children.

“This is also a way,” he says, “to get past the stereotype of the ‘drunken Indian.’ ” Even as the pole is a way to “start a conversation about the past,” he says, it’s also “a symbol of beauty and culture and hope.” 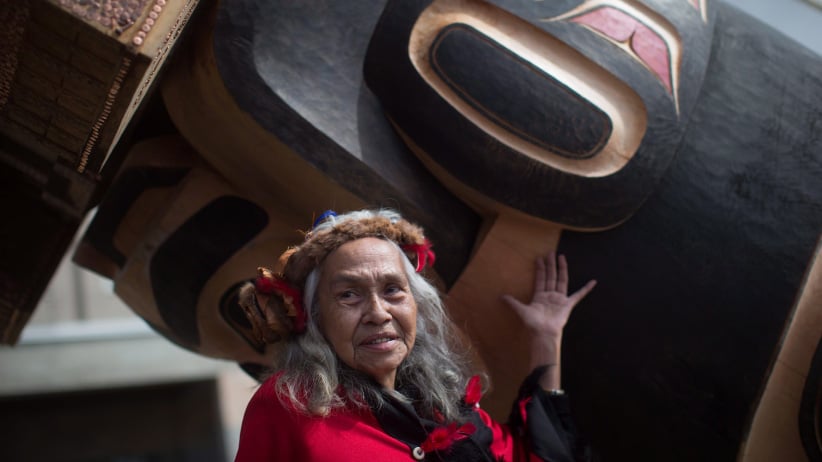 Residential school survivor Pauline Jones, 73, stops to touch the Reconciliation Pole before its raising at the University of British Columbia in Vancouver, B.C., on Saturday, April 1, 2017. (Darryl Dyck/CP)

But in addition to the traditional crests of eagle, raven, thunderbird and bear, the pole-raising event also included some rather large elephants in the room.

In the world’s third least affordable city for housing, the colonial legacy lives on. In a city where officials appear to delight in opening every event with an acknowledgment that they are speaking on “unceded Coast Salish territory,” and where land rights issues are often overshadowed by housing and homeless crises, Indigenous people form a disproportionate number of the overdose deaths in the fentanyl crisis currently gripping Vancouver’s downtown East side.

And in a province with the largest swathe of unceded territory and unresolved treaties in Canada, concerns about colonial legacies are often superseded by disquiet over global capital.

“Vancouver is definitely a city for people with money,” acknowledges Hart, “and it’s still a colonial reality here. It’s part of the heritage of this place as much as the First Nations. Our voice isn’t heard very often.

“But here at UBC I see people from all nations and all walks of life and they’re getting the picture. I’ve been chatting with them as I work on the pole, and a lot of them don’t even realize we had residential schools.”

Outside the slightly carnivalesque atmosphere of the pole-raising ceremony—a very Canadian kind of performance art/pantomime where thousands of mainly white Vancouverites lined up to have a turn pulling up the pole while hereditary chiefs did traditional dances in colourful regalia—an adjacent tent housed residential school survivors, sharing their stories. They were tales out of a horror movie: memories of babies tied down five at a time in cribs and starved to death, stories of bodies in basements, and ongoing nightmares by septuagenarian survivors about footsteps in the hallway and priests coming into their bedrooms at night.

FROM THE ARCHIVES: The lonely death of Chanie Wenjack

And while the raising of the pole on campus was a worthy example of the ongoing reconciliation process between the Canadian government and First Nations, the gruesome accounts of residential school abuse did not engender a sense of patriotism. Rather, they underlined the colonialism of a place where priests and administrators could get away with sexual abuse, physical torture, and—yes—even murder.

This is a place where even now, Indigenous women and girls still bear the brunt of unspeakable violence; where a white serial killer named Robert Pickton murdered them with impunity for years before local police even batted an eye; and where suicide rates for Indigenous teens are at epidemic levels.

“We need to face the reality of what happened in the past and what’s happening now,” says Hart, “and only then can we move forward.”

The horror-film stories and shameful statistics belie the popular narrative that this is a place where immigrants and refugees are “lucky” to be allowed to live. Not, perhaps, for the hugely inflated cost of living, or for the growing gap between rich and poor that offers a downtown with luxury shops and homeless beggars, or for the glaring lack of professional opportunities—but at the very least because “it’s so beautiful here.”

But as survivors told their stories against the gorgeous Pacific backdrop of ocean, mountains and islands, the natural beauty seemed suddenly imbued with an impenetrable sadness. What savage acts had this postcard-perfect landscape witnessed?

How can restorative justice and apologies make a real difference for Indigenous women and their families living below the poverty line on reserves or in inner city slums?

And perhaps especially, beyond the approximately 80,000 residential school survivors already awarded compensation by the federal government, whom does the hand-wringing and apology industry—however well-meaning it may be—really benefit? Single mothers struggling to raise their children and overcome the legacy of generational abuse, or say, a raft of lawyers, and wealthy, well-meaning chattering classes who want to appease their guilty colonial conscience?

“Acknowledging abuse,” suggests Hart, as he attends to a detail on one of the eagles’ wings, “opens the door to helping First Nations people in need today.” But, he adds, “It’s not an easy fix. We’re the only ones who can help ourselves.” The pole, he says, is part of the healing process, as well as a way to educate the next generation about their grandparents’ reality.

MORE: The other residential school runaways

As I watch Hart focus intently on his craft, it’s hard not to think of the survivors’ stories. Even more than I hope that the perpetrators of these heinous acts—many long dead—could somehow be brought to justice, I wish even more that the stories of abuse, and their tellers, will not be exploited or commodified, and that the telling of their tales will actually make a difference in the lives of their grand-children and great-grandchildren.

Hart’s totem pole bears witness to these stories even as it suggests transcendence and hope on the wings of its commanding eagle, poised to fly into a brighter future.

“We still need to move forward,” says Hart, whose determination to complete the pole never faltered, even as he faced personal tragedy—the death of his son Carl—and a hernia operation.

“And Canada needs to stand up on this—not just apologizing, but really acknowledging what happened in the past, so it doesn’t ever happen again.”

Hadani Ditmars is a Vancouver writer whose Lebanese immigrant ancestors were adopted by a Haida chief in the 1940s.