Image of the Week: After more than six months in space, David Saint-Jacques wasn't quite ready for earthly gravity. But a little nausea couldn't ruin his moment. 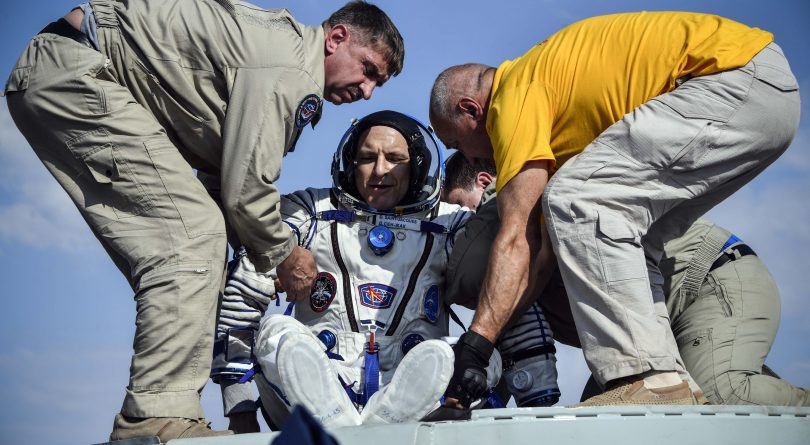 Ground personnel help David Saint-Jacques of the Canadian Space Agency to get out of the Soyuz MS-11 capsule shortly after landing in a remote area outside the town of Dzhezkazgan, Kazakhstan, on June 25, 2019. (Alexander Nemenov/AFP/Getty Images)

Astronauts, in many ways, are larger-than-life figures, and David Saint-Jacques is no exception. The Quebec City native earned his PhD in astrophysics from Cambridge in 1998 before hopping over to Japan for a couple of years to help create highly advanced telescopes. In 2005, he decided to return to Quebec, where he whizzed through medical school, popping into in Lebanon and Guatemala for a few semesters. The man’s full résumé pushes into novella territory (medical work in Nunavik; speaks five languages; commercial pilot’s license; yadda yadda), so we’ll fast-forward to the part where he beat out 5,351 candidates to become an astronaut with the Canadian Space Agency in 2009. Last December, at age 48, he joined a Russian, Oleg Kononenko, and an American, Anne McClain, for a six-month mission to the International Space Station, where Saint-Jacques handily broke a couple records. (His 204 days in space mark an all-time Canadian best, not to mention the time he caught a SpaceX cargo craft in mid-not-air using the Canadarm2—also a first for a Canadian.) So it was a profoundly down-to-earth moment when Saint-Jacques returned to his home planet this week, landing safely in a field in Kazakhstan after a 6.5-hour journey, only to find, for all his hard work and incredible accomplishments, his legs didn’t work. Knees buckled by the heavy reminder that gravity exists on our planet, Saint-Jacques looked more nauseous than his teammates as NASA staff helped him exit the craft. “Gravity is not my friend,” he joked to a reporter from CBC News. “But you know what’s striking me, is the smell of grass. The smell of the wild grass here, it’s just beautiful.” Of course—leave it to the genius astronaut-astrophysicist-physician-engineer to transform an embarrassing moment into one of humbling poetry.