A 'different level' of military sniper 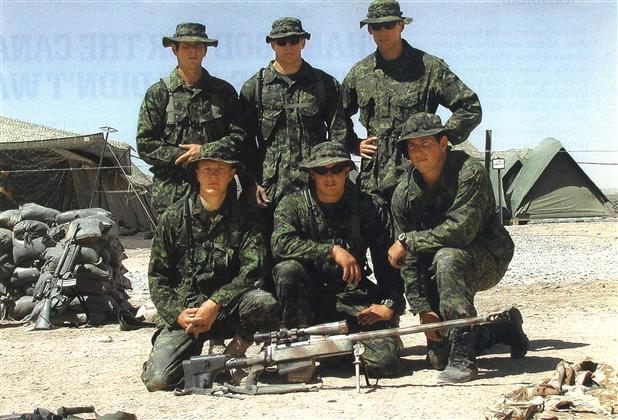 Canadian snipers, including Rob Furlong, in Afghanistan in 2002 (Stephen Thorne/CP)

The distances are mind-boggling: in 2002, Master Cpl. Arron Perry from the Princess Patricia’s Canadian Light Infantry took aim at an Afghan insurgent from a distance of 2,300 metres and hit his target, setting the world record for the longest confirmed kill shot in military history. Not long after, Cpl. Rob Furlong, in the same operation, bested his brother-in-arms with a confirmed kill at 2,430 metres. His record would stand longer, until 2009, when a British sniper, Craig Harrison, made a shot from 2,475 metres.

On June 21, Harrison’s record was shattered by another Canadian, an elite special forces sniper, who, according to the Canadian military, killed an ISIS fighter in Mosul from an incredible 3,540 metres.

Let’s put that in perspective: if you stacked six CN Towers end to end, you would still be more than 200 metres short. The bullet, according to military experts, would have travelled for nearly 10 seconds before hitting its target. The shooter not only would have had to take into consideration wind conditions, but at that distance, also the curvature of the earth.

More astonishing, perhaps, is the fact that over the last 15 years, the active-combat sniping record has been broken four times, and three of those have been by Canadians.

That’s no coincidence, says Furlong, who now runs a marksmanship academy in Edmonton.

“I’ve been saying this forever,” he tells Maclean’s by telephone. “Canadian snipers are the best in the world. The sniper training program has been around for a long time. It’s the foundation, and it’s been retooled from lessons learned in Afghanistan. We’ve built it to be the best.”

This latest record, Furlong adds, has taken sniping “to a different level.” Canadian snipers are considered some of the best in the world in part because they are not simply taught to hit their targets. Like much of the Canadian military, many are trained with skills above their existing rank, in the sniper’s case as Unit Master Snipers, meaning they have the skills to design and run complex operations if the need ever arises. That in itself may not make them better snipers but the gestalt of sniper-training and command-thinking combined could explain their skill.

The practice of equipping soldiers with more than the skills they will need on the battlefield has served the Canadian military well. In Afghanistan, the results were clear. Maclean’s witnessed firsthand how soldiers out on patrol, sometimes for days in enemy territory, operated as closely knit teams. Command decisions were made with input from different ranks, offering multiple perspectives to patrol commanders.

The level of training Canada provides its soldiers, particularly its elite JTF2 commandos, is the driving force behind Canada’s reputation for fielding a highly skilled and intellectually capable military.

“This is a very important point,” says Chris Kilford, a retired Canadian artillery officer and now a fellow at the Queen’s University Centre for International and Defence Policy. “I have been very impressed with the young people in our special forces that I have interacted with overseas. Corporals and master corporals: bright and articulate. I also think that in general our people are often capable of working at a higher level than the rank on their shoulder.”

Furlong agrees, adding that Canadian soldiers are more “cross-trained” than many other soldiers in the world, and Canada’s snipers specifically are given every opportunity to pursue leadership training that refines their mental capabilities, a key component to the psychologically demanding job they do.

Still, there are the naysayers. Warrant Officer Oliver Cromwell, an instructor at the infantry school at CFB Gagetown in New Brunswick* who has taught sniper courses, cautions that more information is needed before the 3,450 meter distance is confirmed.

“There is a difference between slant angle range and true range,” he says. “Slant angle range—if the shooter is at an elevated position relative to the target—may appear longer that the true range, sometimes twice the true distance. I don’t want to be a naysayer but those are just the facts.”

Some online message boards have have also questioned the validity of the new record. In one case a contributor to a military discussion suggested the sniper likely fired into a crowd of ISIS fighters and happened to hit one.

But Furlong points out that these types of distances, 3,000 metres and more, are regularly achieved on the shooting range.

“It’s not an impossible distance,” he says. “The difference is between a shooting range and a battlefield. They are two completely different environments. The pressure these guys are under is huge. So to the naysayers I would just say, this can be done.”

As for the men who accomplished it—snipers work in pairs, including a spotter—Furlong says they probably didn’t realize what they had done until later. “When we broke the record, we didn’t know until we got back to base,” he says. “To be honest, I didn’t really care, neither when I broke it or when mine was broken. Records are made to be broken.”

Still, unless there are major advances in equipment, Furlong adds, this one should stand for a long time.