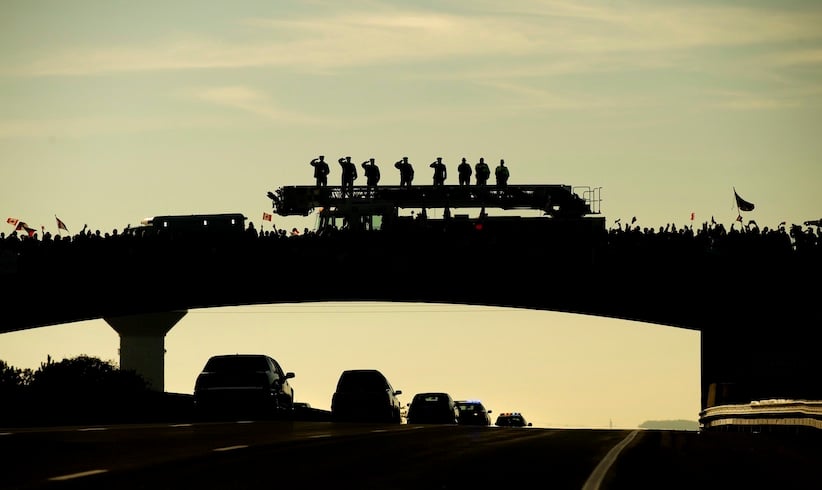 The procession for Cpl. Nathan Cirillo along the Highway of Heroes wasn’t expected in Hamilton for another four hours, but Victoria Boyd wanted to make sure she would get the best view. She arrived in her blue air cadet windbreaker and set up a lawn chair across from the Markey-Dermody funeral home. “He’s coming home,” she said. Boyd has been an air cadet for seven years and will have to retire next May when she turns 19. She’s thinking about joining the reserves and becoming an aircraft mechanic. “Cpl. Cirillo started out as an air cadet, just like me and I admire him because he did so well in his career,” she said. “I’m here today because it’s important to respect those who put their lives on the line for the safety of our country.”

As the day grew darker and colder, hundreds upon hundreds of Canadians in red jackets and poppies showed up to line the sidewalks  as Cpl. Cirillo returned home. A group of women brought bouquets of lilies and roses — flowers they did not take to the Cirillo home like everyone else: “We don’t want to invade their privacy; we just want to do something to show them we care,” one said.

Others made signs, like these two kids who live in the nearby apartment building.

One boy handed out flags. Victoria and Doug Anderson brought their own — one that has been in the family since the 1960s. Both of their parents served in the Canadian military.

The earlier you arrived, the longer you held up your flag.

Every few minutes, a bus would go by and honk approval.

Kristin Skrtich, one of Cpl. Cirillo’s best friends, kept looking up and down the road for signs the procession was near. It didn’t bother her that it was getting colder by the minute, she didn’t want to cover the shirt she’d made that day to honour him.

Kristin, one of #CplCirillo‘s best friends, made this T-shirt. She’s been here for hours. #highwayofheroes pic.twitter.com/hXKdZsRUeP — Rachel Browne (@rp_browne) October 24, 2014

The police announced that, finally, the procession was coming around the corner.

And now everything is silent pic.twitter.com/cT8vybJh5l — Rachel Browne (@rp_browne) October 24, 2014

As the hearse pulled into the driveway, the crowd, now a thousand strong, sing “O Canada” softly.

The Argyll and Sutherland Highlanders, Cpl. Cirillo’s regiment, got out to bring the casket inside as one officer played the bagpipes.

There were tears and one last rendition of “O Canada.” The crowd clapped and slowly dispersed.

No word yet on whether the funeral on Tuesday will be open to the public, but there will be two public visitations on Sunday and Monday.