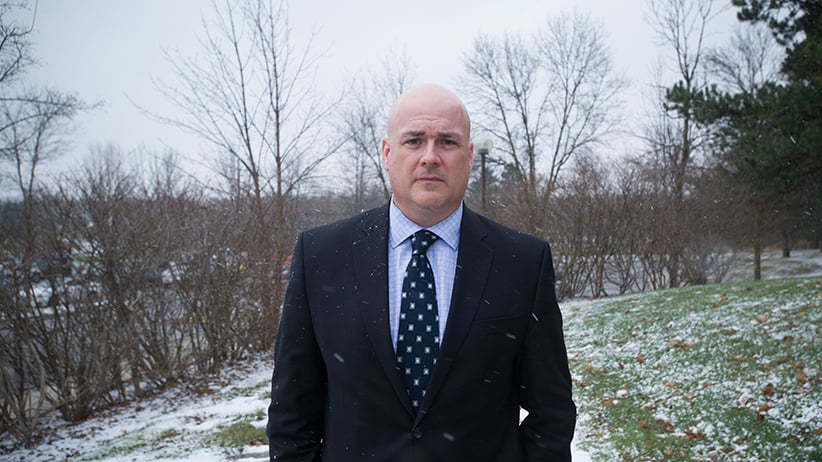 Two years ago, while testifying in a long-running harassment suit filed by one of his officers, RCMP Commissioner Bob Paulson sounded puzzled, even amazed, by the depth of antagonism Sergeant Peter Merrifield felt toward Canada’s beloved national police force.

Merrifield was “solidly and irretrievably embittered with the organization,” Paulson said, noting that his underlings had led him to think the sergeant was “recalcitrant and not responsive to any direction.” Otherwise, the commissioner lamented during his December 2014 appearance at the civil trial in Newmarket, Ont., Merrifield seemed a “smart and effective officer who was really upset with his circumstances.”

Paulson might now have a clearer understanding of Merrifield’s frustration.

On Tuesday, Justice Mary Vallee of the Ontario Superior Court ruled that Merrifield had indeed been harassed, issuing a decision that lacerated senior RCMP officers for their “reckless indifference” and “disgraceful conduct” toward him.

RELATED: Inside the RCMP’s biggest crisis

Merrifield’s award after a near decade-long battle to get his bosses into court—and a trial that dragged on for a year—is meagre. He got $100,000 in general damages for “intentional infliction of mental suffering,” plus $41,000 in lost promotion money (the legal fees he racked up, for which Her Majesty may now be on the hook, are another matter and could reach seven figures).

Certainly the decision will garner attention among rank-and-file Mounties, many of whom came to regard Merrifield’s legal travails as testimony to the gross imbalance in their relationship with the force’s upper ranks. Past harassment cases, they’ve long complained, reveal a pattern in which so-called “white shirts” (commissioned officers) cover for each others’ mistreatment of “blue shirts” (those at or below the rank of staff sergeant), brushing over workplace conduct violations by senior officers, and derailing the careers of junior Mounties who have the audacity to complain.

Merrifield’s troubles date back to May 2005, when he stood for a federal Conservative nomination in Barrie, Ont., taking a regular day off to attend the riding association’s vote. He lost, but several of his commanders took exception to his political involvement, saying he’d failed to take the proper leave without pay before running, then scolding him for discussing national security in a local radio interview without first obtaining permission.

They initially seemed content to send him a memo telling him not do it again. Yet, two months later, one of them, Supt. Marc Proulx, secretly opened a code-of-conduct investigation over the nomination incident—the first of four probes against Merrifield that never resulted in discipline. It was the beginning of a Kafka-esque campaign of whispers and gas-lighting that the court found poisoned Merrifield’s reputation throughout the service, knee-capping his once promising career and sending him into crippling depression.

He was dumped from a coveted position in the threat-assessment group, an intelligence unit that investigates threats against VIPs, and shunted to an undefined job in the force’s customs and excise unit. When he asked for a transfer to the elite Integrated National Security Enforcement Team (INSET), he was told he wasn’t welcome.

RELATED: Who will pay for the RCMP’s epic failure?

The abuse culminated in a 2012 appearance by Paulson before a senate committee, in which the commissioner smirkingly dismissed Merrifield’s allegations—including the sergeant’s contention that Proulx had been caught in a “john sting” even as he was making Merrifield’s life miserable. “Let us face it,” the commissioner said dryly, “some people’s ambitions exceed their abilities.”

If Paulson doesn’t regret those remarks, the federal lawyers representing the RCMP surely do. Proulx admitted during the trial that he had, in fact, been picked up in the john sting in London, Ont. One of Paulson’s assistant commissioners, Steven White, testified that he’d heard about the incident, and that Paulson asked for more information about it. That information never reached Paulson, the court found. Yet the commissioner went ahead with his broadside before the Senate committee, anyway. At the trial, that bolstered Merrifield’s contention that the conspiracy of misinformation about him had spread to the highest reaches of the force.

What was supposed to be a brisk, three-week proceeding soon devolved into a months-long carnival ride. Court heard evidence that hostile officers had been interfering with Merrifield’s investigations; that the RCMP had repeatedly failed to produce documents it was ordered to; that Merrifield had himself harassed Paulson (Vallee waved off this claim as “an administrative bungle”).

In late 2014, the judge slapped documents under seal that reportedly contained allegations involving the prime minister’s protective RCMP detail. The media, including Maclean’s, applied to have the seal lifted, but Vallee rejected the plea, saying the law prevented her from even explaining why.

In the end, says John Phillips, Merrifield’s lawyer, the case set down important markers in an increasingly rancorous relationship between the RCMP and its officers. While the force’s recently announced settlement with hundreds of female Mounties claiming sexual harassment speaks to growing awareness of those problems, Phillips said, there have been few, if any civil judgments to curb the sort of abuse Merrifield endured.

“What this decision points out is that harassment extends to all the members where there’s an abuse of authority,” he said. “You have an utter disregard for the impact of decisions that are being made on the people under command.”

An RCMP spokeswoman said the force had received the decision but wouldn’t comment until it had studied it further; justice department lawyers have 40 days in which to file an appeal.

Merrifield, though suitably pleased with his win, says the whole ordeal has left him numb. These days, he works on the RCMP’s V.I.P. unit, guarding domestic leaders and honoured visitors—”a sergeant for life,” as he puts it. He is active in the RCMP’s nascent union movement, which won the right to certify in court but still awaits legislation that will make that possible.

But he believes subtle and not-so-subtle retaliation for his defiance continues to this day, and says he won’t take it sitting down. He’s already written privately to Minister of Public Safety Ralph Goodale, he says, adding: “If this government is serious about tackling harassment in the RCMP, I’ll appreciate a response.”